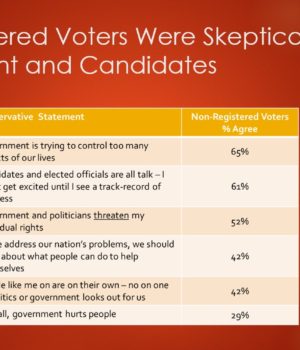 In the months leading up to the 2016 Presidential election, Market Research Foundation conducted a series of tests to measure the impact of various voter contact methods and messages. Our measures of medium and low propensity suburban females across four states, first-time GOP primary voters in South Carolina, and a registration drive in select low-registration census districts across Pennsylvania, provide insight into outreach methods for future elections.

This universe was comprised of married female homeowners with children from suburban regions across Colorado, Michigan, North Carolina and Pennsylvania. Just over 8.5 million women received a series of three emails in the months leading up to the election, with the second email in the series performing best in terms of open rates. This is typical of a three-series email campaign.

The test consisted of a test and control group, with pre-election phone calls to the test group urging these women to support then-candidate Trump. The message of national security was particularly influential in encouraging these women to support Trump. We observed a lift of on average 5% in support for Trump among women who received the pro-Trump call, when compared to women in the control group who received no contact. Below is a comparison of Trump support between the two groups. 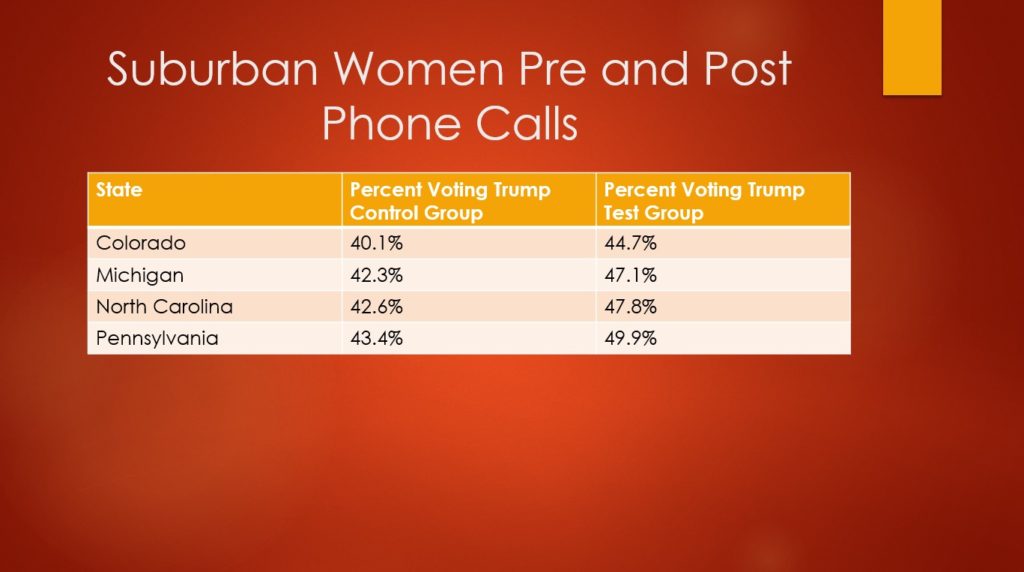 This test developed a model identifying potential Trump supporters in South Carolina who had not previously voted in a Republican primary, and delivered messaging to motivate them to support Trump’s presidential bid.

We conducted a comprehensive poll and appended voter responses to the South Carolina state voter file using Alpine Data Labs. We then built a linear regression model identifying 142,000 individuals who had never cast a vote in a primary and were likely Trump supporters based on their survey responses. This model predicted a 72 percent propensity to support Trump.

These individuals received seven points of contact – five emails, one phone call and one text message – in the weeks leading up to the South Carolina primary. In addition to the strong lift over the control universe, the number of first time voters statewide was close to the percentage of the control. This confirms the validity of the random sample. The test universe ultimately voted at a substantially higher rate than the control and first time voters who received no contact. Below is a comparison of the test and control groups as well as all first-time voters. 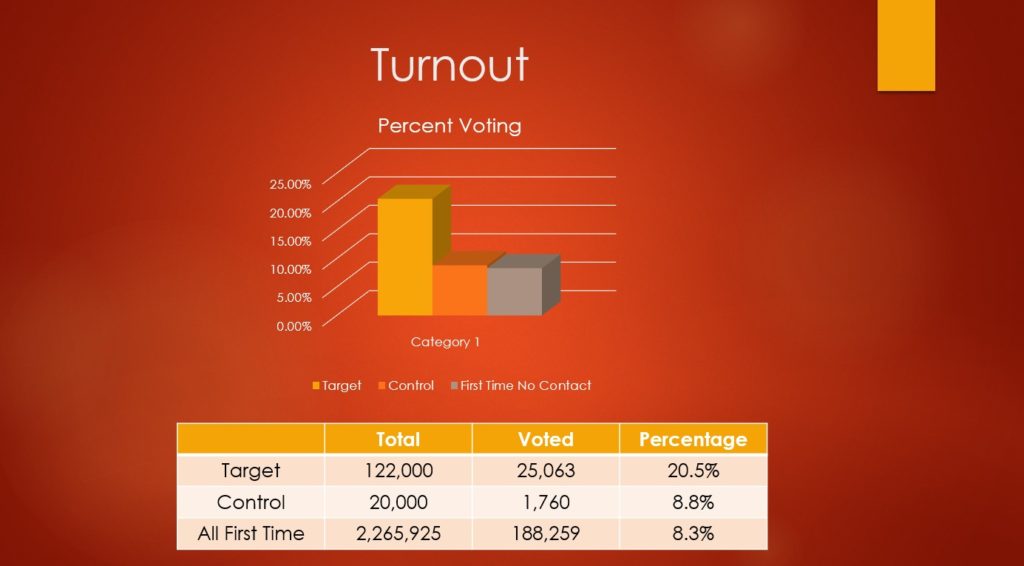 By focusing on a modeled universe the cost per vote was kept lower than half of what any other campaign was able to do in South Carolina.  Source of this data can be found here.

Below is a comparison of the cost per vote. 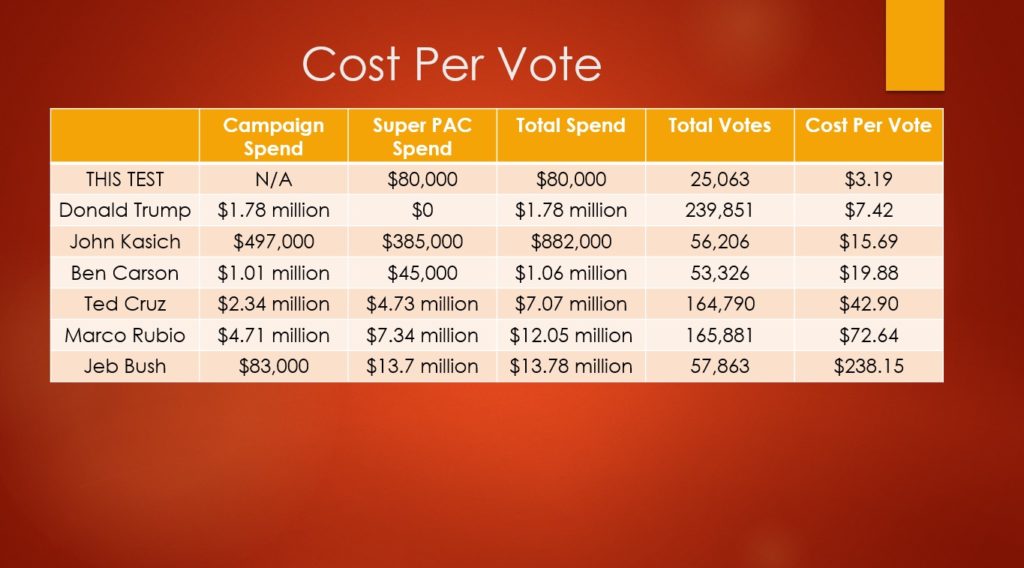 Our phone poll surveyed 400 of these non-registered voters with a minimum of 20% of the sample reached on cell phone.

The greater Philadelphia area (Bucks, Chester, Delaware, Montgomery and Philadelphia, counties) was excluded as this geographic location has a demographic and lifestyle profile different to the rest of the state.

We examined the survey responses to better understand the reasons for non-voting, and identify messages that resonated with these individuals and could possibly compel them to vote.

We found the largest shares of non-registered voters were Conservative or Moderate on economic issues, education and healthcare issues, and abortion and social issues. Below is a breakdown of how respondents affiliated on key issues. 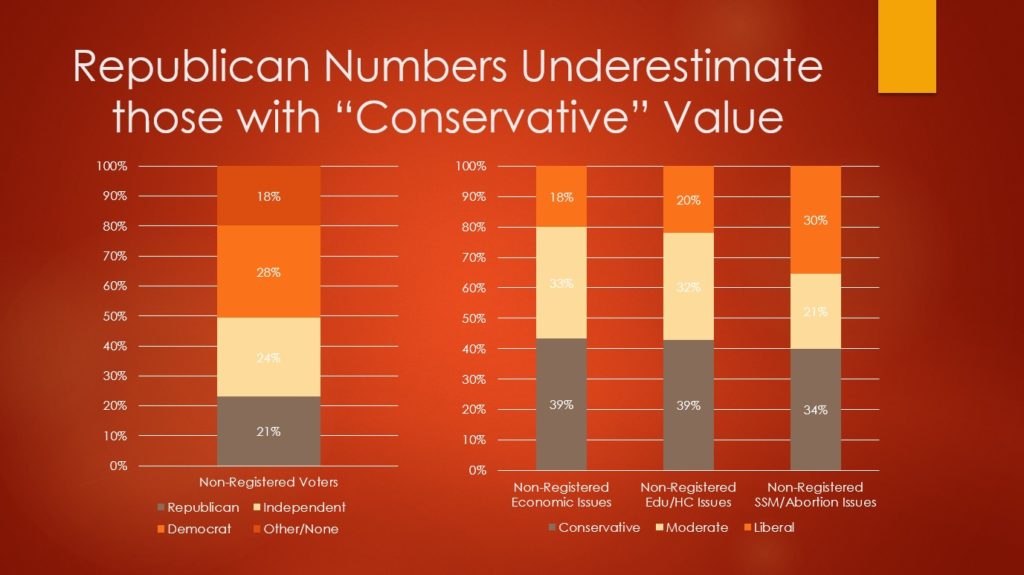 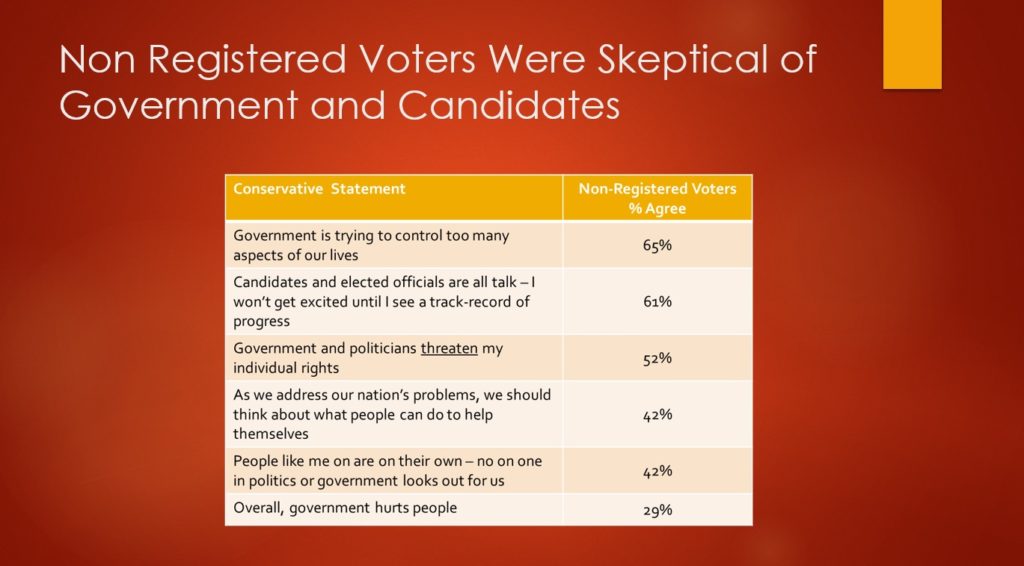 Taking these findings, we created a profile of the types of census tracts with dense populations of non-registered conservatives and picked four tracts, one in each region of the state, for our initial registration test pilot. Below are the four top tracts we identified as having large shares of unregistered voters with conservative views from four regions across Pennsylvania. 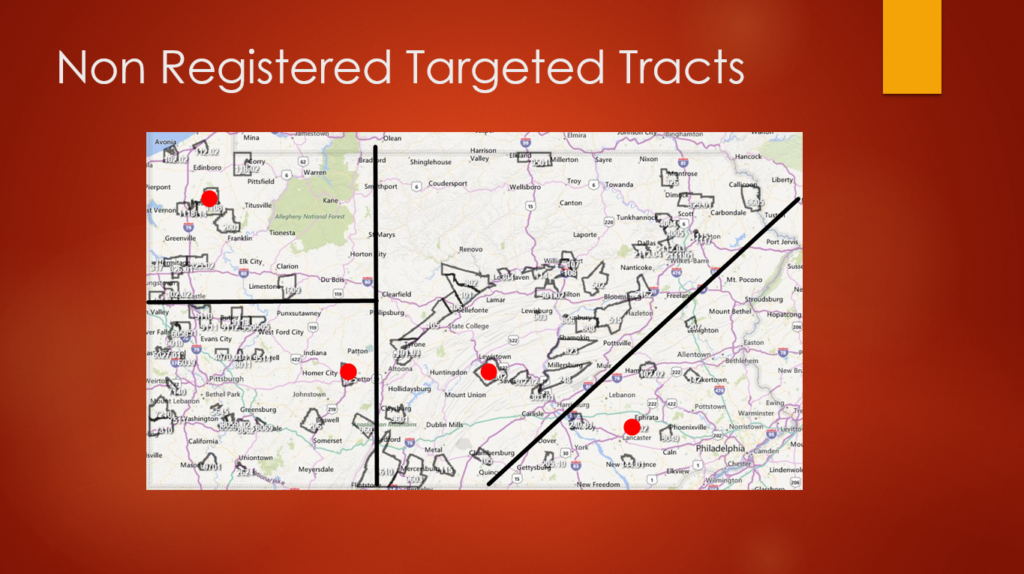 Next, we conducted our registration drive in these key tracts. This consisted of five different segments which received varying levels of contact and varying types of calls to action.

We then measured registration results in our test and control groups across the four target counties to determine the impact of the various messages and contact methods. The most successful segment with an 18.7% registration rate – one 11% above the control group – was segment C. These individuals received a partially completed registration form along with a stamped envelope returned to the County Clerk and a letter signed by a well-known local conservative talk radio host. All segments significantly outperformed the control group.

Below is a breakdown of the successful registration rate by contact method, and across the four target counties. 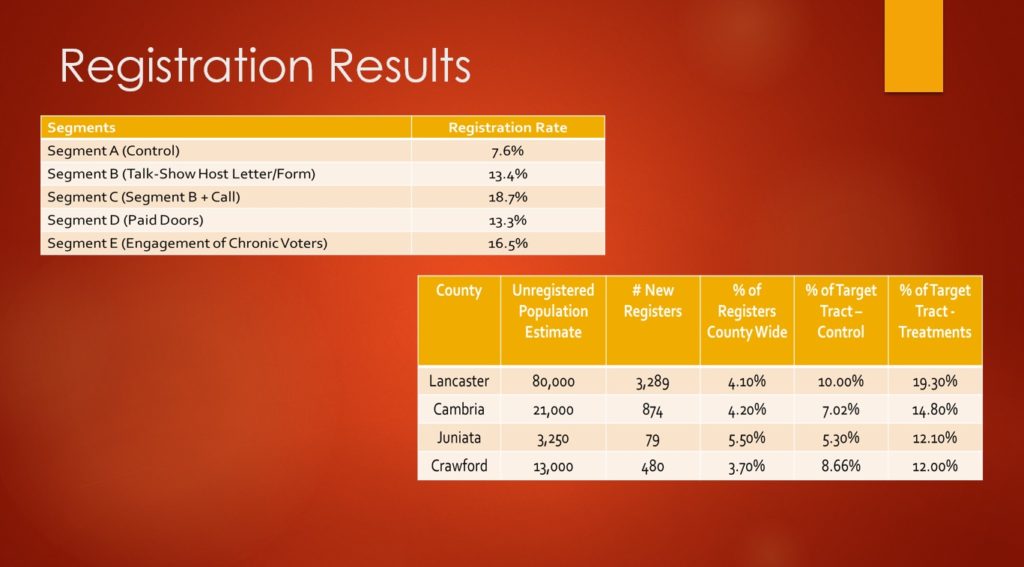 This project using census tract data provides a road-map for the successful identification of non-voters with conservative views. It also underscores the importance of making it easy to vote, removing ambiguity about how to vote, and leveraging local conservative thought leaders to foster a sense of duty to vote.