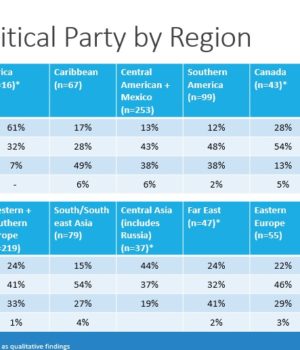 Asian Americans are the fastest growing immigrant group in the U.S. according to Pew, and while they account for about 4% of voters, their concentrations in key swing seats this election should put them on the GOP’s radar. But there is longer-term importance to securing Asian American support for conservative policy positions, since they are projected to become the largest immigrant group in the country, surpassing Hispanics in 2055.

Chinese Americans make op the largest share of Asian voters, and their support for Democrats dropped between 2012 and 2016 according to the National Asian American Survey. Obama walked away with 69% of the Chinese American vote in 2012, and Clinton got 61% in 2016. While Asian Americans overall favored Clinton 69% to Trump’s 25%, there was deviation in Trump support by nation of origin. Trump secured the highest levels of support from Vietnamese Americans, 33% of whom voted for the President. In the 2014 midterms, Republicans fared better, with 50% of Asian Americans indicating on the National Election Pool exit poll that they voted for a Republican and 49% indicating they voted for a Democrat.

Congressional races in CA-49 (6.8% Asian), NJ-11 (9.2% Asian), NV-3 (11.8% Asian) and VA-10 (14% Asian) are all classified as ‘Lean Democratic’ by the Cook Political Report and have Asian populations above the national average of 5.8%. Mobilizing and consolidating support among Asian Americans in these races could help the GOP hold onto the House in November. More importantly, mobilizing Asian Americans for conservative policies is vital for Republicans long-term, since Asians are projected to become the largest immigrant group in the country by 2055.