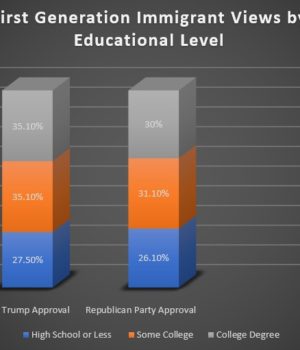 Market Research Foundation was one of the first research groups to identify the ‘White, No College’ wave which brought out white blue-collar voters in droves and helped propel President Trump into the White House. Since then, data has been fairly consistent in validating this trend. Earlier this year, Pew published a series of reports showing the highest educational attainment-party divide in two decades. According to Pew’s surveys, in 1994, 39% of voters with a four-year college degree identified with or leaned Democrat, and 54% identified or leaned Republican. In 2017, those numbers were exactly reversed.

Market Research Foundation has identified a growing educational attainment trend in the opposite direction within two key demographics: Black voters and first-generation Americans. Our nationwide online survey from July of this year found that Black voters with higher levels of education are more likely to have supported the President, not less. Seventeen percent of Black Trump voters had a Postgraduate Degree, versus 12% of Black Clinton voters. According to the census Bureau’s educational attainment publication, only 22% of Blacks over age 25 had a Bachelor’s Degree and just 8% had an advanced degree in 2015. The more education a Black voter had, the more likely they were to support Trump. Combining the shares of Black Trump voters with a Bachelor’s Degree and a Postgraduate Degree, 49% had completed at minimum a BA. This is in stark contrast to the way white voters voted in 2016. Sixty-seven percent of whites with a high school education or less supported Trump in 2016, while just 28% supported Clinton.

Our nationwide July survey of 1,751 first generation Americans from across Europe, Africa, Asia, the Middle East, Canada, and South America, found that the less education an individual had achieved, the more likely they were to have supported Clinton – by 45.5%. In addition, higher educational attainment was correlated with higher Trump approval and higher approval of the Republican Party. The table below outlines the correlation between educational attainment and sentiment. 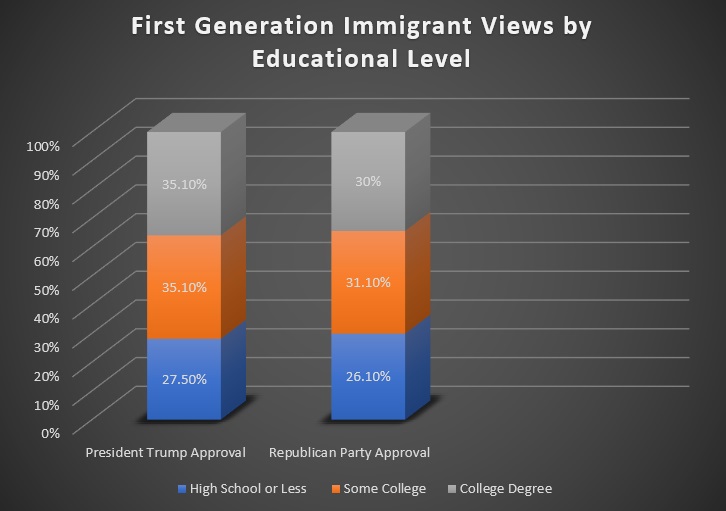 Overall, 35% of first-generation Americans voted for Trump in 2016, while 56% voted for Clinton.

Small-business ownership, higher rates of education, and higher income were positively correlated with voter participation overall. Ninety-one percent of college-educated immigrants voted in 2016, compared to 75.7% of those with a high school or less education. First generation immigrants in the $200K and up group voted at a rate of 95.5%, versus a rate of 70.5% for those in the $25K and lower group.

MRF is still unpacking the various reasons for these trends, but what is clear is that education level is an increasingly relevant predictor of political affiliation, and it breaks out very differently for natural born and White voters compared to first generation immigrants and Black voters.