Political correctness, long the enemy of critical thinkers on the grounds that it replaces reason with bizarre and often contradictory narratives under the guise of ‘sensitivity’, appears to dominate the political agenda of the Left. At its least destructive, political correctness subtly coerces individuals into viewing the world a certain way, regardless of how accurate that view is. At its worst, political correctness eats away at logic and independent thought, using coercion, social pressure, and shaming, to subvert the rule of law. The recent Brett Kavanaugh nomination process is an example of political correctness doing just that, as the Left did everything in its power to block the judge’s appointment to the Supreme Court based on entirely unfounded accusations. As a country, we came very close to throwing out the right of due process long guaranteed to every citizen, and replacing it with a new politically correct mantra: “guilty until proven innocent.” The message from the Left was clear, block Kavanaugh’s confirmation by any means necessary, because a purported victim is always to be believed, regardless of if there is evidence to support the accusations. But they failed to do so, and analysis of public sentiment shows that most Americans, even most liberals, are nowhere near ready to throw out the rule of law and replace it with the rule of political correctness.

Clearly, political correctness is not remotely mainstream. The combined efforts of moderates, conservatives, and even liberals, act as a stabilizing force to push back against the efforts of radical progressives to normalize it. The Kavanaugh victory wasn’t just a victory for conservatives. It was an indication that despite their best efforts, progressives were unable to thwart due process in favor of political correctness.

Market Research Foundation’s polling substantiates the findings from More in Common, showing that only 36% of Americans agree with the assertion that we should always believe accusations of sexual assault, even if the details and evidence are lacking. Closely after the SCOTUS hearing, this percentage fell even further, to just 33%. The most notable variables in our study were the importance of educational attainment and the presence of children or teens in a household. Respondents with a college degree were much less likely to accept claims without substantial evidence, as were parents with children between ages thirteen and seventeen. Below is a comparison of levels of agreement with the statement by education level. 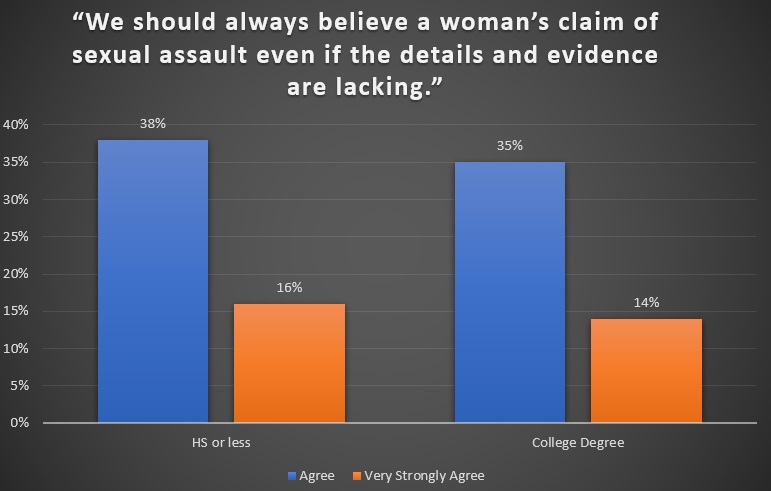 Political correctness is dangerous to individual critical thinking, dangerous to individual rights, and dangerous to the rule of law. The extreme left has failed to replace the rule of law with their own political interests, and they’ve failed to rally support for their views even among their wider liberal base. This is the beginning of the end for political correctness. It will be remembered as a strange few years in the early 21st Century when a minute minority of radical progressives tried to force their views on the rest of the population and failed. If it is remembered at all.