If you Google ‘young voters’ or browse a typical midterm recap article from MSNBC or the Washington Post, you may walk away with the unremarkable conclusion that nothing has changed with young voters. For years, analysts, pundits, and political parties have lumped millennials into a bucket and called it ‘the youth vote’. Conservatives have attempted to appeal to younger voters with mixed results and largely conceded these votes to the left. Democrats have relied heavily on the millennial vote – former President Obama won 60% of the millennial vote in 2012 and a 2017 Pew Center survey confirmed he is still highly popular among millennials. The consensus appears to be that young voters are still enthusiastic liberals and instrumental in securing Democratic victories across the nation. While this was true for millennials as a whole, the upper end of the millennial cohort is now in their late-30s. They’re getting older, and while their political preferences don’t appear to be shifting substantially, the political preferences of the next generation of adults are shifting the overall direction of ‘the youth vote’.

A growing body of research indicates the generation born after 1995 – dubbed Generation Z – is significantly more conservative than millennials, and may be the most conservative generation since WWII.  Well and good, but what is the actual impact of this generation? The answer is, it could be huge. Generation Z will have a large impact on the future of the nation across two concrete measures: time and scope. First, voters in their late teens and early 20’s have an average of 60+ years ahead of them to affect the direction of the United States across a range of social, economic, privacy, security, and technology issues. Second, young adults born after 1995 outnumber every other living age cohort in the nation at 25 percent of the population. Generation Z outnumbers Baby Boomers and millennials combined.

Earlier this year, Market Research Foundation identified and began tracking a trend that appears to be accelerating worldwide: the increasingly conservative views of the youngest generation. Our preliminary research indicates a demographic shift is occurring in today’s young adults, foreshadowing a more conservative nationalist youth vote.

Under Twenty-Fives Breaking from the Left

While we wait on state voter files to examine voting preferences by age, CNN exit polling provides a blueprint to understand the youth vote in the wake of the midterms. CNN broke out the youth vote by age in two categories: voters 18 to 29, and a further segmented group of voters 18 to 24. When the youth vote includes all voters under 30, the majority of under-thirties side with Democrats. However, when the youth vote is defined as those under twenty-five, the youngest voters break from pattern, supporting Republicans at higher proportions than those over twenty-five. In a score of tight races, the 18 to 24-year-old age cohort was the only segment under age 40 to break from the typical youth-vote-left pattern, supporting Republican candidates at rates significantly higher than millennials. Races in key swing states including Florida, Texas, Pennsylvania, and Wisconsin paint an increasingly purple map of the youngest voters, in stark contrast to the consistent blue map of millennials.

In the Indiana Senate race, Republican state lawmaker Mike Braun defeated Democratic incumbent Joe Donnelly with the support of Indiana’s youngest voters. Braun tied with Donnelly for the under-twenty-five segment 47% to 47%. More voters under 25 voted for Braun than those in every other age cohort under 40. Below is a breakdown by age. 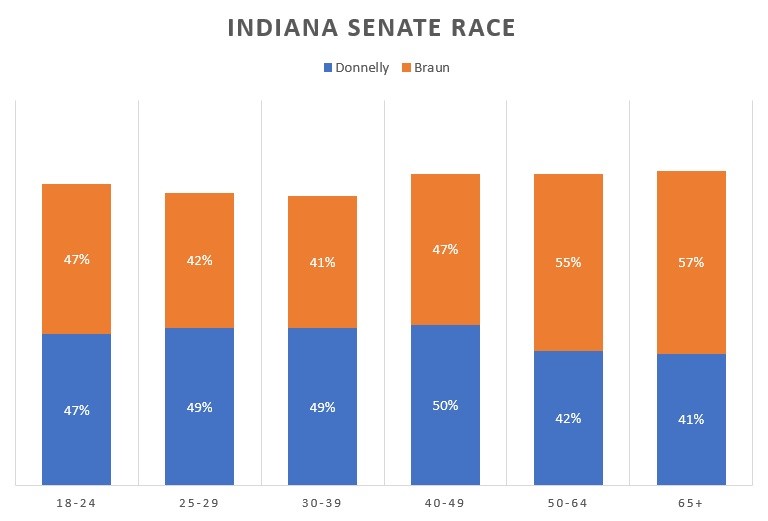 In Florida’s tightly contested gubernatorial race, Republican Ron DeSantis defeated Democratic challenger Andrew Gillum in a narrow victory. In this case, Generation Z did break in favor of Gillum, but far less enthusiastically than every other age group under 40. Gillum secured 64% of voters 25 to 29 and 63% of voters 30 to 39, but just 58% of voters 18 to 24. DeSantis secured a full 40% of Florida’s under-twenty-fives. Below is a breakdown by age. 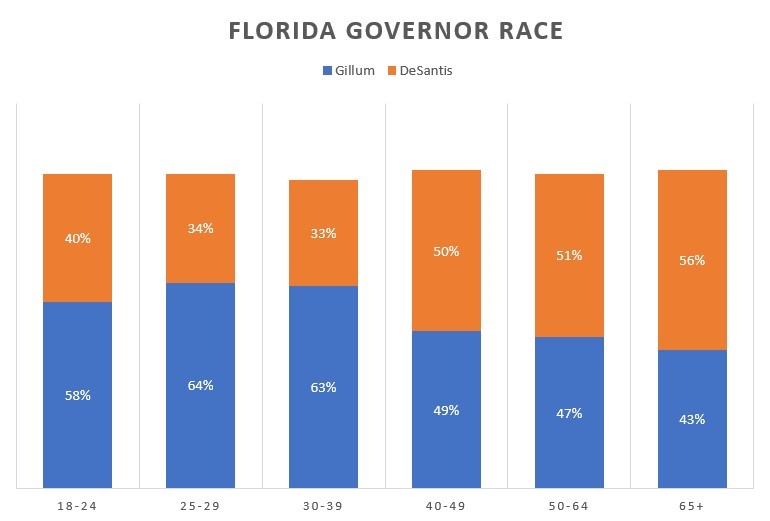 In the Florida Senate race, Republican Rick Scott scored a victory over Democrat Bill Nelson, in part due to an uptick in support from Florida’s under twenty-fives. Although Nelson secured 62% of voters under twenty-five, he did worse with this segment than he did with those ages 25 to 29, and conceded 38% of the youngest voters to Scott. Scott won a larger share of voters under 25 than any other age cohort under 40. 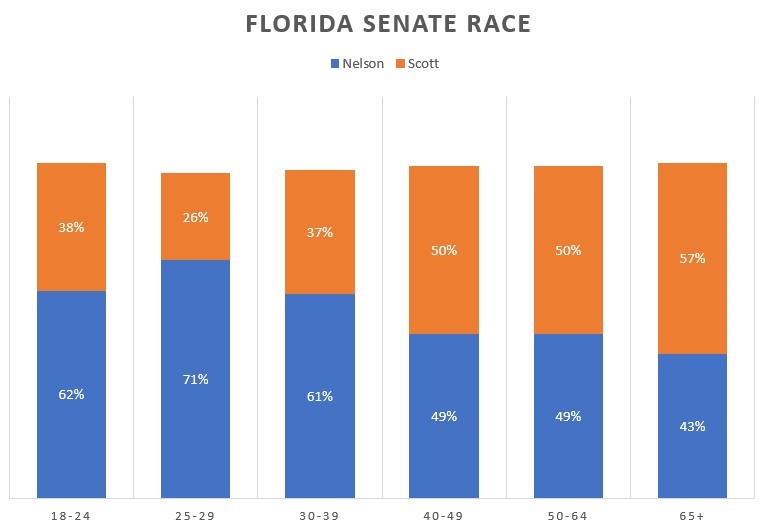 Democrats had significant difficulty securing under-twenty-fives in the Georgia Governor race when compared to voters just a few years older. Republican Brian Kemp secured a victory over Democrat Stacey Abrams, with the help of 40% of Georgia’s 18 to 24-year-old voters. This was the largest share of voters to break for the Republican within any age group under 40. 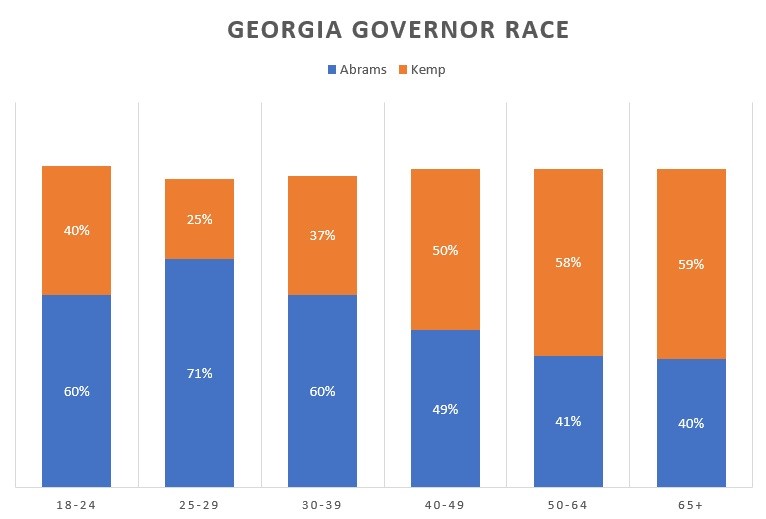 In the Texas Senate race, charismatic Democrat Beto O’Rourke won more voters ages 25 to 29 than he did Generation Z. Thirty-two percent of voters 18 to 24 chose to support Ted Cruz over Beto, versus 26% of those 25 to 29. 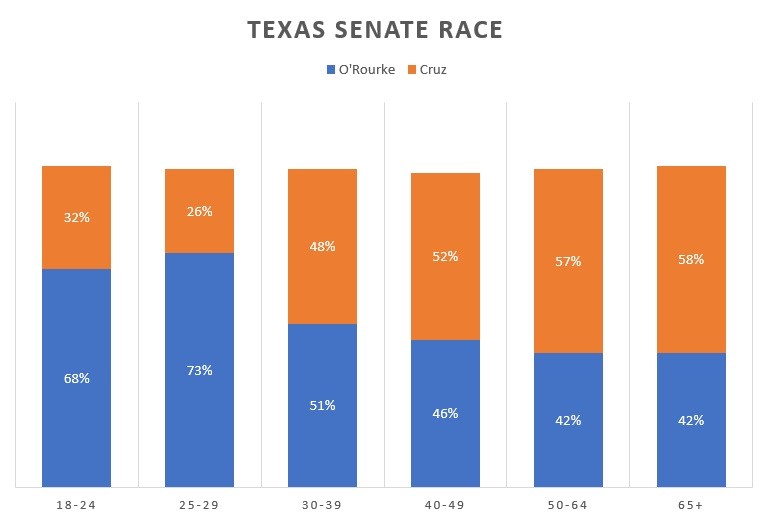 In the Pennsylvania Governor race, Republican challenger Scott Wagner lost out to Democrat Tom Wolf, but secured more voters in the under-twenty-five age cohort than any other age group under 40. 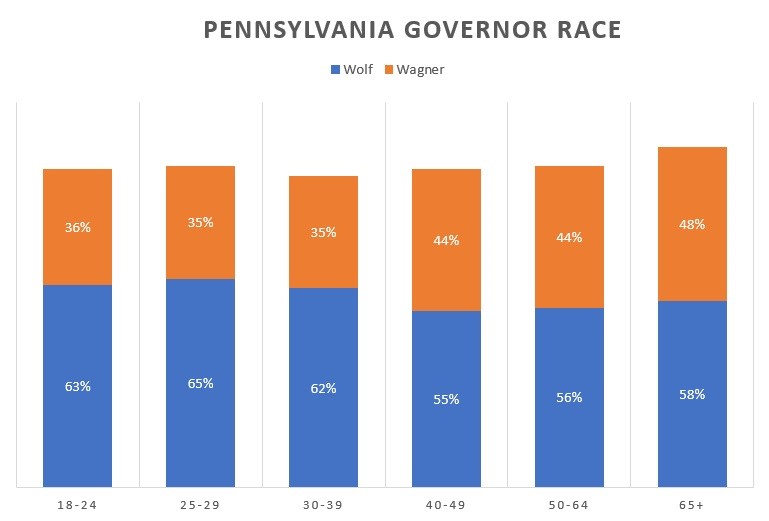 In the Pennsylvania Senate race, under-twenty-fives broke even further from Democrats, with almost 40% supporting challenger Republican Lou Barletta over incumbent Democrat Bob Casey. Casey easily snagged over 60% of voters between 25 and 40, but struggled with voters under twenty-five and over 40. 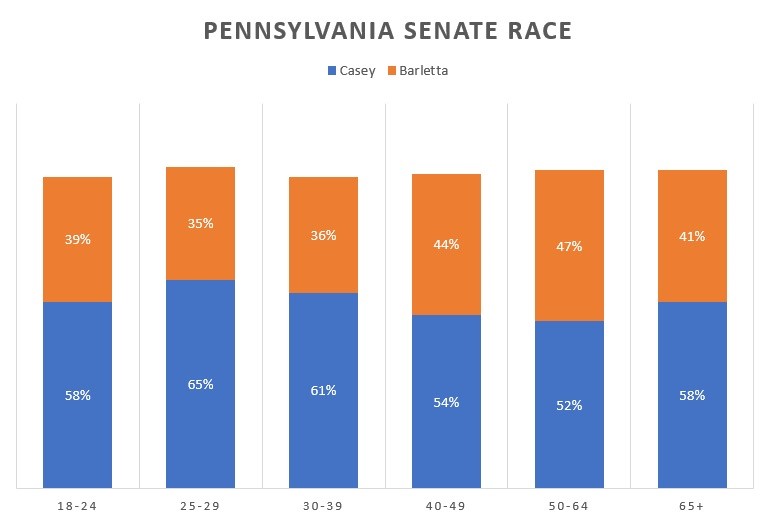 In the Wisconsin Senate race, Democrat Tammy Baldwin won reelection against Republican challenger Leah Vukmir. Baldwin, the first openly LGBTQ senator of the state, easily secured a full 70% of voters ages 25 to 29, but did less well with under-twenty-fives, conceding a full 40% of the youngest voters to Vukmir. 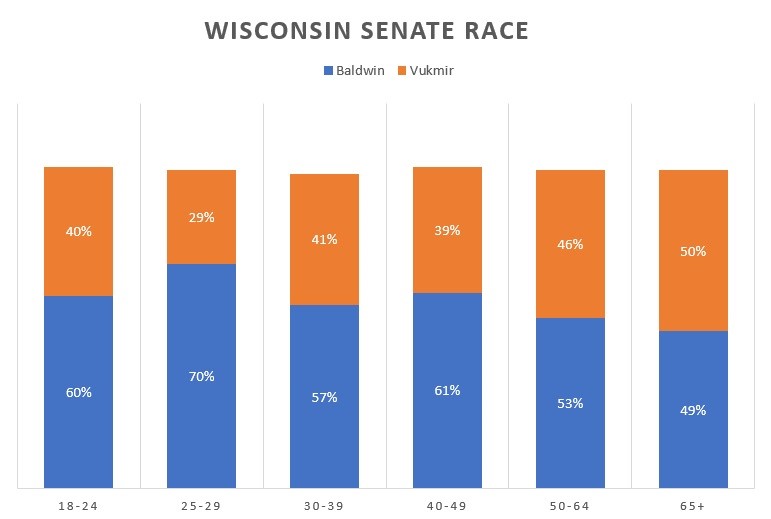 The shift of young voters to the right when compared to millennials is an important demographic trend that will play a big role in the next presidential race in key states like Florida, Texas, Wisconsin, and Pennsylvania. It is worth noting that this trend does not hold nation-wide. In Montana, Minnesota, and North Dakota, under-twenty-fives broke in favor of Democrats at higher margins than over-twenty-fives did. There are many factors that could contribute to this trend, including the inclination of younger voters to rebel against communal norms. In Montana, identifying as a liberal is still considered a bit radical. Exit polling broken down by age is far from an exact science. Further segmentation of under-twenty-fives by variables such as gender, ethnicity, education level, family income, and urban versus rural, using a combination of state voter file data and census tract data will yield further insight into Generation Z.

In 2016, Generation Z’s first Presidential election, they cost Hillary Clinton 7 points from what Obama received in 2012. In swing states, the shift from 2012 to 2016 was even more marked.

A 2016 national survey of approximately 50,000 high school students conducted by My College Options and the Hispanic Heritage Foundation, found Trump led Clinton 46% to 31% for first-time voters, and 42% to 17% among Generation Z males.

Among white male high school students, Trump led 58% to Clinton’s 8%. More white male high school students said they would vote for a third-party candidate, than for Clinton – 9% would vote third party, 8% would support Clinton, 3% would write in a candidate, and 21% would not vote.  If even a fraction of this demographic shows up at the polls in 2020, the impact could upset the Democrat Party’s youth strategy.

A recent survey of 3,388 young adults between the ages of 18 and 23 in G20 countries including the United States, the United Kingdom, Canada, Germany, Japan, Mexico, and India, shows Generation Z is politically aware and economically conservative. The report included a series of questions about career aspirations as well as views on nationalism and globalism. The material is particularly interesting given that IFAC is not a political organization. Here is what the researchers found:

The trend toward more conservative views among the youngest adults is further supported in the United Kingdom. A 2016 survey of almost 2,000 U.K. young adults by brand consultancy The Gild found 59% of Gen Z respondents say their views are ‘conservative’ and ‘moderate’ on a range of issues including same-sex marriage, transgender issues, and marijuana legalization. This is compared to 83% of UK millennials and 85% of UK Gen X respondents who stated their views are ‘quite’ or ‘very liberal’ on the same issues.

In terms of personal finances, Generation Zers are keen to earn their own money, and place a heavy emphasis on saving for the future. The State of Gen Z 2017, a national research study by the Center for Generational Kinetics, found that 77% of 14 to 21-year olds currently earn their own spending money from part times jobs or earned allowance, and 21% had a savings account before the age of ten.

In the Western world, there is a discernible shift toward a new set of values among the youngest voters. These values are too complex and nuanced to fit neatly into any specific political party, but tend to favor: less globalism, and more internally focused, nationalist policies that prioritize the needs of existing citizens. A preference for Trump-style political leaders. A desire to adopt more fiscally conservative policies in government and personal life. It is not yet a full-on revolt against leftism, but it could turn into one. Much like their reluctance to admit Brexit was happening, Trump was happening, Kavanaugh was happening, the Democrat Party and their mouthpieces in the mainstream media are using confirmation bias to promote an overly simplistic view of the youth vote. The left’s blind spot is an opportunity for conservatives to carve out a coalition of Republicans from the largest living age cohort, give the President a second term, and secure an America-first agenda for the next 60+ years.