Recently, The Pew Research Center released a much-talked about study on Generation Z, the post-Millennial Generation that is comprised of today’s 6 to 23 year-olds.  The key takeaway from major news media, and the Pew report itself, seems to be that Generation Z is as liberal, if not more liberal, than Millennials. Democrats everywhere are rejoicing while Republicans gear up to permanently write off anyone under 40.

This is an overly simplistic view of the data and relies heavily on a Republican-versus-Democrat narrative that is in the process of crumbling in the wake of Donald Trump, the non-conservative Republican President and multiple factions within both major political parties.

First, the Pew study seems to be capturing some overall societal shifts rather than generational differences.  The report says that Generation Z is more liberal in part because they are more likely to see racial diversity and gender equality as good things.  Other issues tackled in the study include transgender issues, gender equality and climate change. These are all areas where the United States has gotten more progressive over time and this is reflected strongly in attitudes of the younger generations and not indicative of their overall ideology.  For example, look at the way all generations have shifted on gay marriage, a “liberal” issue many can remember Barack Obama and Hillary Clinton refusing to support. Currently, two-thirds of Americans support gay marriage, a number made up by gains in all generations.  Furthermore, attitudes on race and gender are significantly more liberal than they were decades ago and these new societal values are embedded in younger generation.  Data from Gallup shows how acceptance of Black Presidential candidates went from 54% in 1958 to 96% in 2012.  There was a similar jump for female candidates from 38% to 95%.

The conclusion can be drawn that society, and younger generations, are more liberal on these issues but that societal shift does not mean one political party will have the advantage.  As these issues fade from public debate, others will appear and Americans, younger or not, may not see their belief in racial equality as a total acceptance of a progressive liberal platform.  To put it another way, in the early-20th Century, a key issue dividing conservatives and liberals was the establishment of Social Security.  However today, it would be difficult to decide if someone was conservative or liberal based on their support of the program – it is overwhelmingly accepted as a beneficial program. 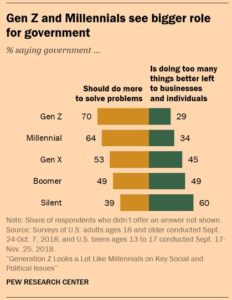 There is one question in the Pew study being pointed to as evidence Generation Z favors liberal Big Government solutions.   Seven-in-ten members of Generation Z believe that “governments should more to solve problems.” What this question and subsequent data lacks is context.  Does Generation Z want to see government do more to ensure a “fair wage” or to enhance border security? Do these young Americans want to see government cut regulations to promote economic liberty and growth, something businesses and individuals cannot possibly address?  It is worth remembering that Republicans have ceded their role as proponents of small government to the Libertarian wing of their side and instead favor big government solutions to different problems than Democrats, meaning that even strong Republicans may look to the government to implement conservative solutions.

Some of the earliest work on Generation Z (which came out over two years ago) notes that putting this youngest cohort into traditional “conservative” or “liberal” buckets doesn’t really work.  Yes, they are more likely to favor gender equality, accept gender fluidity and believe America needs to work on race relations but they are also more than twice as likely to attend church as Millennials, have lower drug and alcohol usage, despite being more likely to accept drug legalization. They are self-described economic conservatives and pragmatic about money, which could likely translate into strong opposition to deficit spending, for both social programs and military operations.  In short, this generation looks libertarian and nothing in the new Pew data counters that conclusion.

Could the youth of Generation Z be the next stalwarts of a Progressive Democratic Party?  Sure. But as Pew states several times in its report (which appears to have been ignored by most media covering it), it is far too early to write this cohort off as identifying with one party, or even ideology.  Given the current political climate, today’s political parties might not even exist when the majority reach voting age. Any group looking to understand Generation Z must push past topline results on hot button issues and dig deep to understand who this generation is and how their worldviews have been shaped.