Washington Post opinion writer Elizabeth Bruenig, who is known for editorial positions along the lines of give socialism a try, recently wrote a grudging admission of President Trump’s political prowess.

Trump’s speech at the 2019 Conservative Political Action Conference (CPAC) included a moment where he hugged an American flag, and statements like, “I’m in love, and you’re in love. We’re all in love together”. It was a definite departure from established political discourse and the mainstream media wasted no time in mocking and dismissing it. Bruenig herself quipped:

“Trump’s effusive love may or may not be the result of calculated strategizing, but it’s not a bad tactic, even though it’s rhetorically bizarre compared with most electoral speech. He seems to intuit that decent swaths of Americans struggle not only with a poverty of material resources — which his policies have worsened — but also with a poverty of dignity and with emotional destitution that comes from being thought little of, mocked, ignored and dismissed by mainstream culture.”

While her claim that the plight of Americans has worsened under President Trump is refuted by historic lows in unemployment and the highest rates of personal financial optimism in 16 years, her recognition of Trump’s unique communication style is astute. Yes, Trump’s political language, and his entire approach to politics, is wildly different from what Americans are used to. While his hyper-active tweeting and unapologetic denouncement of his critics keeps the media occupied, Trump has understood something important about political discourse since the beginning. When he plunged into politics as a newly-minted Republican and accepted the GOP nomination in 2016, he positioned himself as “the voice of forgotten men and women”. Since then, his rhetoric has continued to strongly empathize with the frustrations of Americans who rarely see their own concerns addressed by Washington politicians.

Dignity is something that has been scarce in political discourse of late, in both parties. The left claims to stand for ‘tolerance’ but leftwing politicians regularly dismiss entire swathes of Americans as ‘deplorables’, ‘Bible thumpers’ and so on. Less obvious, is the lack of dignity with which the left treats their own constituency: beneath each new step toward socialism, whether Medicare for All or a Universal Basic Income, is the implication that Americans are incapable of operating our own lives, securing our own healthcare through our employers, even participating in the economy at all. The left claims to be a champion of the disenfranchised, but constantly places Americans into victim-role boxes and subtly reminds us, we’re not very capable. One 2020 candidate running as a Democrat is so convinced that Americans won’t be able to support themselves that he’s latched onto the idea of a government-sponsored income subsidy, despite the policy’s dismal record. The universal basic income experiments of the 1960s and ‘70s in Seattle and Denver showed that a guaranteed government subsidy from 1971 through 1982 resulted in a 15% decline in labor force participation. Underemployment and unemployment are also tied to higher rates of illegal drug use, higher rates of crime, and significant psychological distress. Something the modern left fails to grasp, but Trump appears keenly attuned to, is that most Americans don’t find dignity in mere subsistence at the hand of government, we find dignity in work.

Market Research Foundation began to substantiate this concept with our own research on the dignity of work in Tennessee last year. We surveyed 800 registered voters on the issues most important to them and their attitudes towards work and contribution. We found that work itself provides a sense of dignity, and this sentiment is shared across the political spectrum. Ninety-four percent of respondents agree with the statement: “All work should be respected no matter the position or wage paid.” 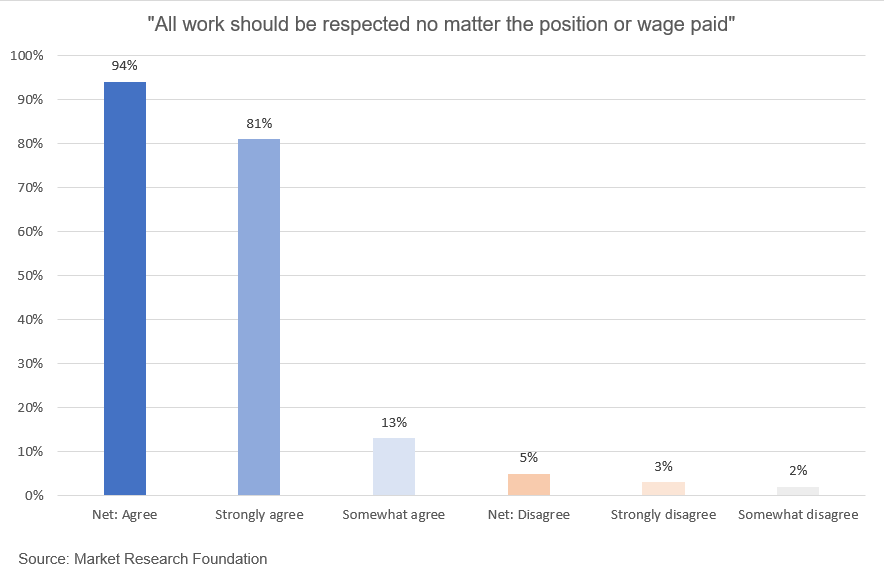 We also found a significant number of respondents feel people are dismissed because of their field of work, and this sentiment is stronger among Democrats than Republicans.  Seventy-three percent of Democrats versus 61% of Republicans feel that blue collar work is looked down upon. 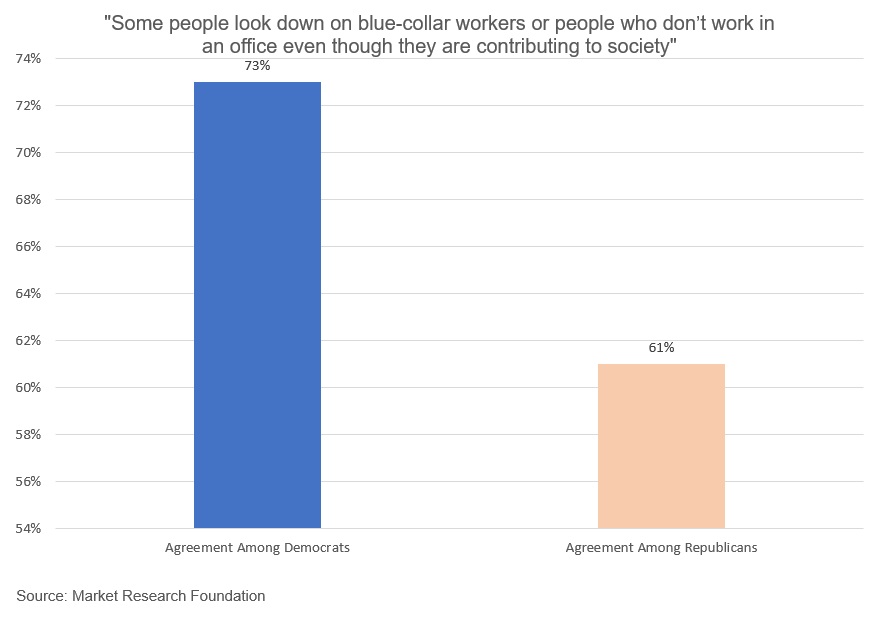 Market Research Foundation also tested sentiment for the terms ‘dignity of work’ and ‘local community responsibility’, and found these concepts are overwhelmingly regarded as positive. 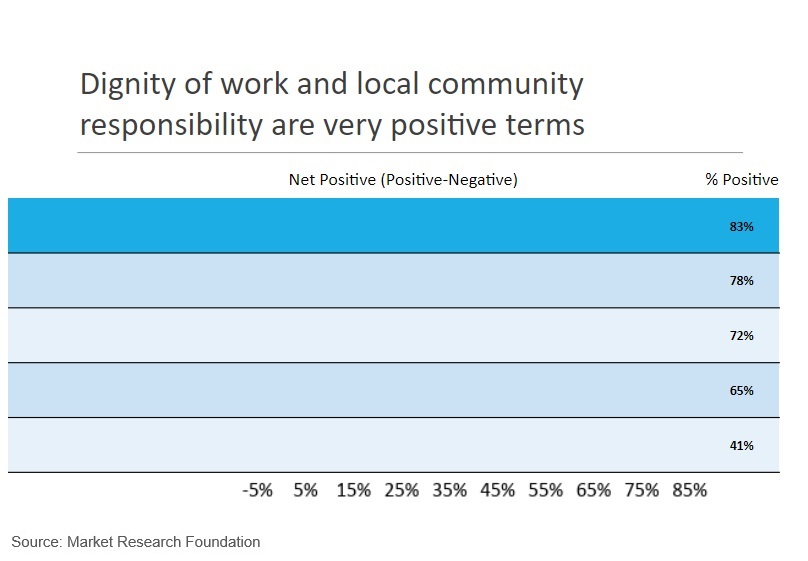 An important factor the left failed to grasp in 2016, is that blue collar Americans didn’t shift toward Trump for purely economic reasons. Economic distress played a role, but there was more to it. For years, working class Americans have been ignored, ridiculed, dismissed, and looked down upon for their career fields, educational backgrounds, or zip codes. The Democratic Party and the Republican Party have treated the working class with an increasing lack of interest and lack of dignity, while Trump has done just the opposite. The fact that an exceptionally wealthy Wharton School graduate and New York real estate mogul can connect so effectively and enduringly with Middle America, is a testament to Trump’s political awareness. He is able to secure lasting loyalty from a base that is largely comprised of Americans whose economic, social, and educational backgrounds couldn’t be further from his own, because he doesn’t constantly remind them of it. He expresses genuine concern for their hardship, and he has made the cornerstone of his presidency empowering all Americans through economic policies.