Addressing illegal immigration was a central issue in the 2016 election, and continues to rank high on the list of voter priorities. Market Research Foundation asked young people between the ages of thirteen and twenty-three, dubbed Generation Z, their views on a series of immigration policy questions. While young Americans say they think the immigration process is burdensome, an overwhelming majority say immigrants should follow proper procedures to become citizens. Over half of young Americans think increasing funding for Immigration and Customs Enforcement (ICE) and ending sanctuary cities would help reduce illegal immigration.

Below is a summary chart of Generation Z’s immigration views. 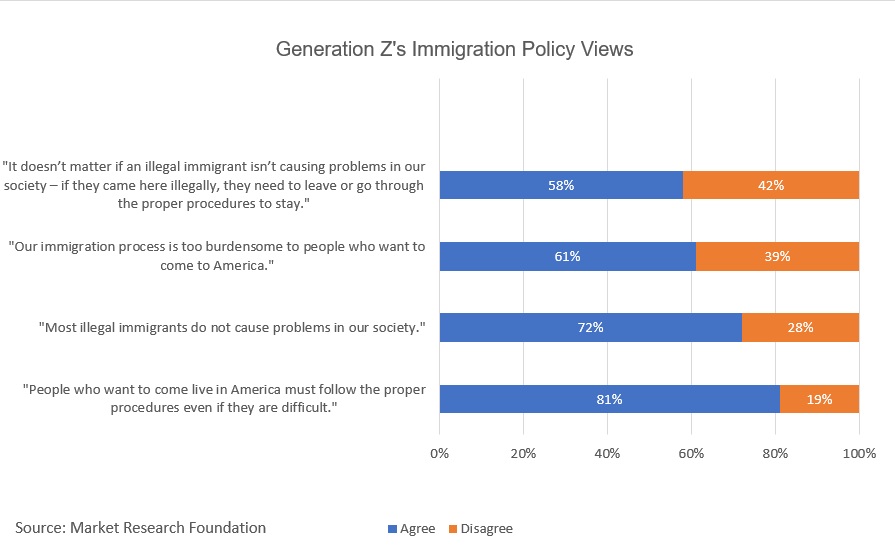 While majorities across the political spectrum want immigration laws to be respected, there is disagreement about the most effective ways to reduce illegal immigration.

Although a majority of young people do not think most illegal immigrants cause problems, this view does not translate to a willingness to accept lawlessness. The most widely held view among young people on immigration is the importance of following legal procedures.

Unsurprisingly, this stance is more popular among young Republicans and Trump enthusiasts, but it is not confined to the GOP or to young Americans who support the President.

70% of Young New Englanders Say Follow the Rules or Leave

Region also plays a key role in support for this stance. Our recent article on young people’s views on foreign policy showed that young New Englanders (which includes individuals from New Hampshire, Maine, Vermont, Massachusetts, Rhode Island, and Connecticut) are the least receptive to a humanitarian justification for foreign intervention. In this case, young New Englanders appear to be rejecting a progressive open-borders policy, with a full 70% of New Englanders supporting the ‘leave or go through the proper procedures’ statement. New England boasted the largest share of Agreement by region, followed closely by the reliably conservative East South Central states of Kentucky, Tennessee, Mississippi, and Alabama. Below is a chart showing agreement with the ‘leave or go through the proper procedures’ statement by region. 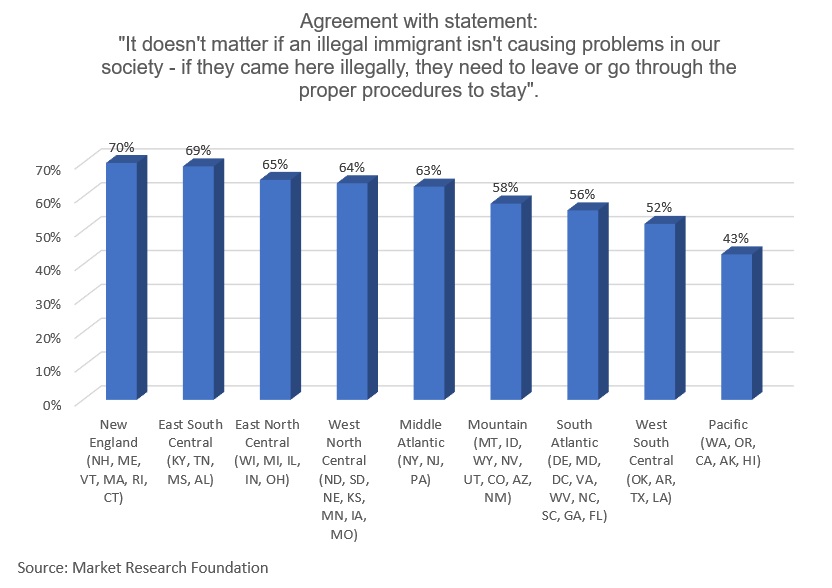 Our body of research continues to dismiss the idea that the youngest generation of Americans wants to radically reshape the United States. Generation Z favors structure, hierarchy, and the rule of law. Proposals that reward lawlessness, like Rep. Ocasio-Cortez’s call to abolish the Immigration and Customs Enforcement agency altogether, do not appeal to this generation as a whole. Generation Z’s views on immigration display a strong preference for creating and enforcing practical immigration laws, and these views are strongest among New Enganders. Young people show significant support for making it easier to immigrate to the United States, but the majority believe immigrants have an obligation to follow the law, even if it is difficult to do so.