They think people should be responsible for helping themselves and government should step back, object to foreign intervention, demand adherence to immigration laws, are relatively bullish on President Trump, don’t think fondly of former President Obama, and are highly critical of both major political parties. These are just a few of the attributes that set young New Englanders apart from their peers and explain their determinedly independent political views. Our survey of a representative sample of young Americans between 13 and 23-years-old draws a stark contrast between political ideologies on the East and West coasts, and indicates that New England in particular may be rekindling a nearly-extinct form of Republicanism. This form of Yankee republic-loving independence has declined drastically in recent decades as the Republican Party has embraced increasingly conservative stances on social issues and codified a base around hawkish peacekeeping. According to the Pew Research Center, the combined delegations of six New England states went from 15 Democrats and 10 Republicans in 1973-74 to 20 Democrats and two Republicans in 2011-2012.

However, a growing body of research indicates the youngest Americans – Generation Z – hold views much more in line with their moderate Generation X parents than with Millennials or even Boomers. This age group supports an independent, America-First Republicanism that is particularly popular in New England and embraces the principles of self-determination, non-interventionism abroad and the strict enforcement of immigration laws at home. Our survey explores a variety of political views by region, including views of President Trump, Former President Obama, and views on government, and the findings hint at a distinctly independent identity open to common sense right-of-center policies.

While varying levels of social welfare and populism are popular in both parties, young New Englanders espouse the most classically liberal views of any region in the United States. We asked young people to indicate their preference for either of the following statements:

Statement 1: As we address our nation’s problems, we should think about what government can do to help the people.

Statement 2: As we address our nation’s problems, we should think about what people can do to help themselves. 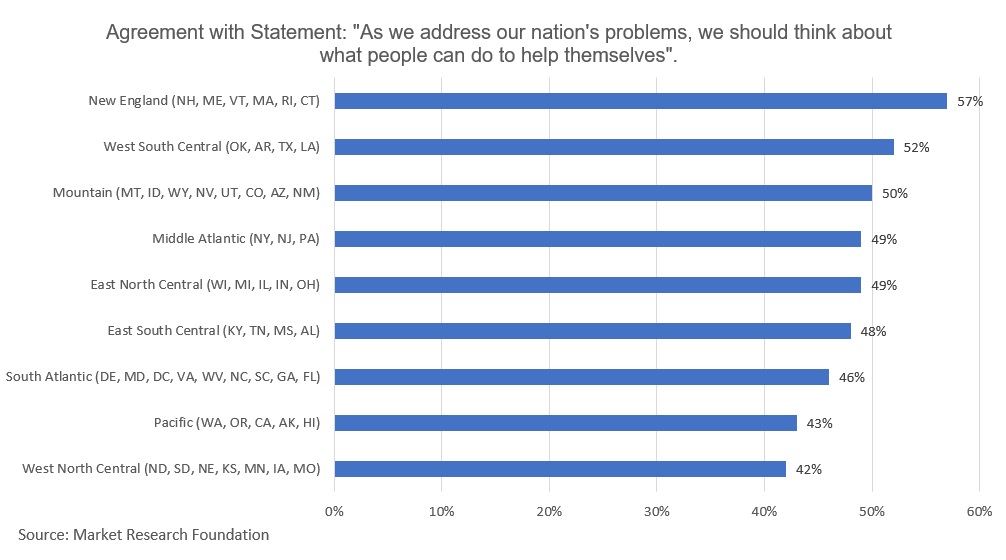 Young New Englanders are Critical of Both Parties, and Determinedly Independent 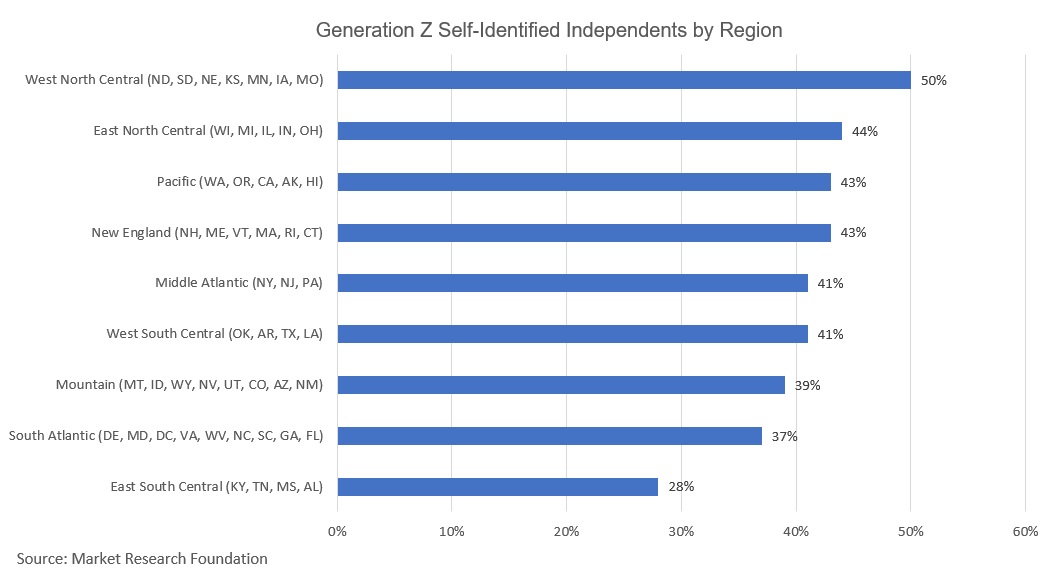 We asked respondents to indicate their approval or disapproval for a series of public figures and groups, including President Trump, President Barack Obama, and the DNC and RNC. While Trump’s approval nationwide clocks in at 30% among 13 to 23-year-olds, there are significant regional deviations. The President’s approval is highest in Republican strongholds in the East South Central region (Kentucky, Tennessee, Mississippi, and Alabama), and stands at 40% for the region. His approval is lowest in the Pacific states (Washington, Oregon, California, Alaska, and Hawaii), and stands at 19% for the region. Below is a chart of Trump’s approval by region. 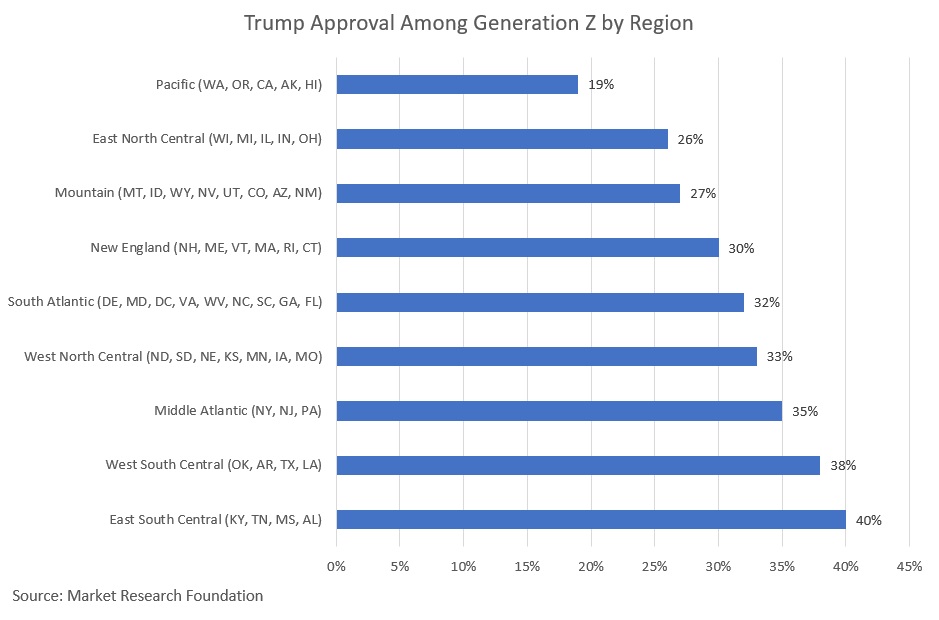 Despite Democrat-heavy legislatures and a reputation for liberalism, young East Coasters hold an approval rate of the President closer to that of Southerners than to that of West Coasters. 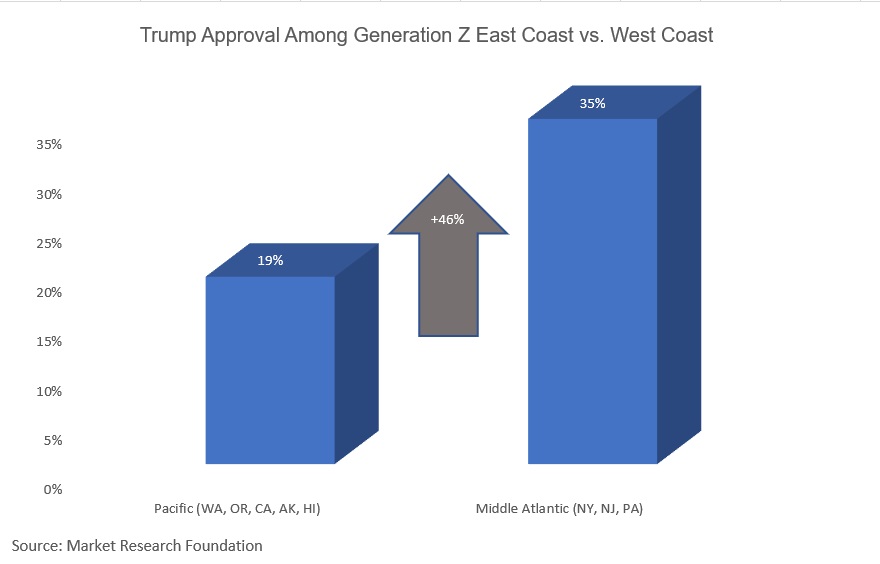 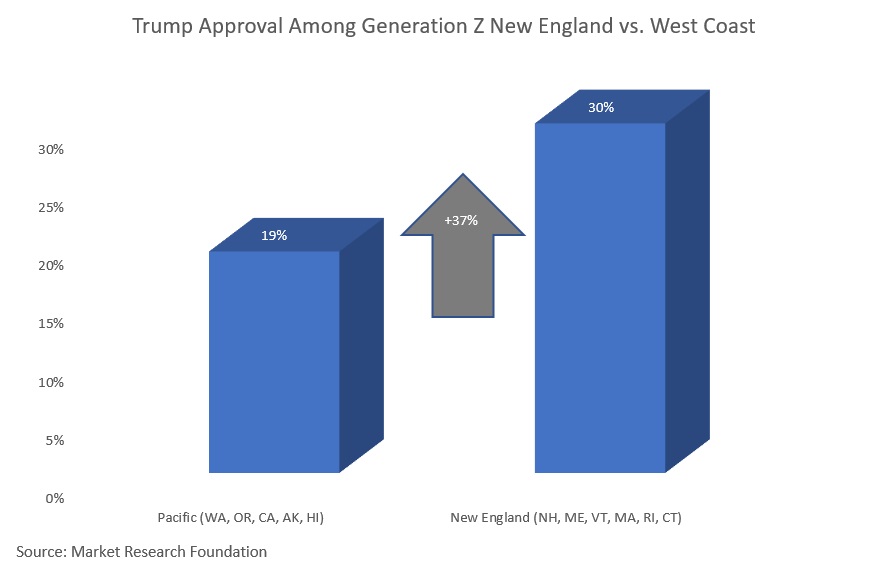 Obama Disapproval in New England Second Lowest in The Nation

Although former President Obama holds an approval rating among 13 to 23-year-olds of 72%, this varies significantly by region and race. Obama’s approval is highest in the Middle Atlantic region (New York, New Jersey, and Pennsylvania) at 75% and lowest in the East South Central region (Kentucky, Tennessee, Mississippi, and Alabama) at 62%. His approval rate among young Whites is 28% lower than among young Blacks (62% versus 86%) as shown below. 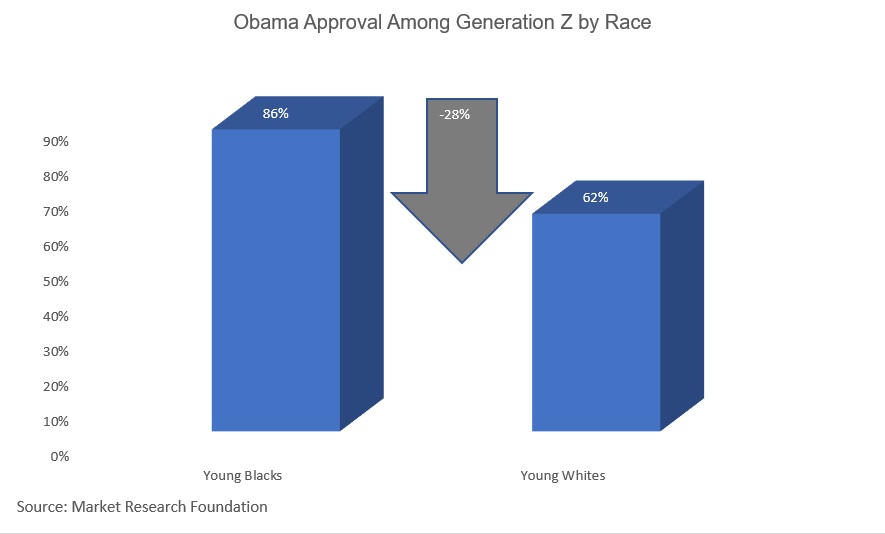 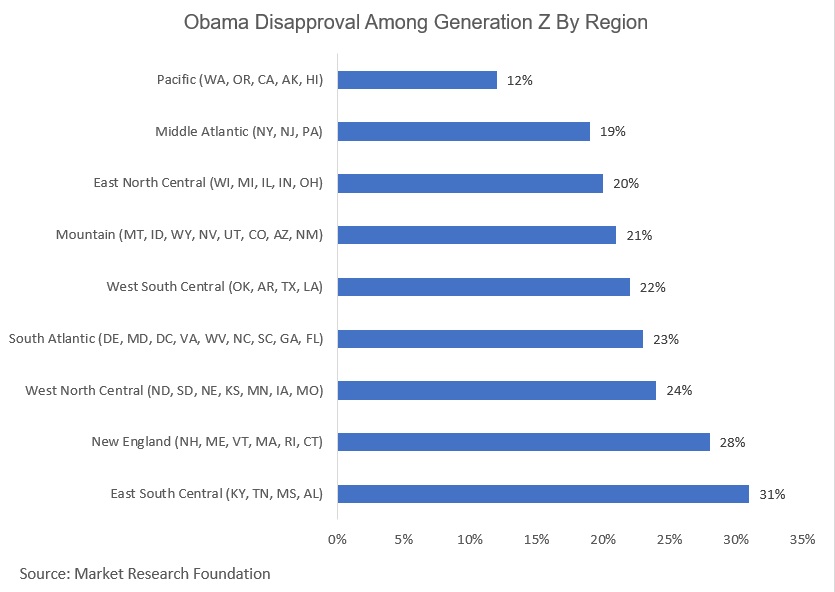 Market Research Foundation’s analysis of young New Englanders provides insight into the next generation of Americans, and boons well for candidates who speak to a limited-government America-First agenda. However, it is important to remember young people are still forming their political ideologies and opportunities to change their opinions abound, particularly in education and media. The purpose of our research is to move beyond the media-cycle headlines claiming Generation Z is solidly leftwing. The reality is much more nuanced, and the policy views of young Americans are not only greatly influenced by race, and region, they’re aligning outside of the current dominating political ideologies. Among this generation, it is easy to find White, non-religious New Englanders who are even bigger border-hawks than their Southern neighbors, socially conservative religious Hispanics who think America has a duty to foreign nations, and highly religious postgraduates. Race, religion, and region all play very important roles in young people’s views of the United States and its responsibilities to American citizens and foreign nations.