Rising costs of living, the devaluation of college degrees,1.2 trillion in student loan debt, and insufficient job opportunities are just a few of the factors contributing to the significant increase in young adults living with parents well into adulthood. Economist Gray Kimbrough of the University of North Carolina at Greensboro has been compiling data on the economic realities facing today’s Millennials and Generation Z. Kimbrough’s analysis zeros in on states like California, New York, and Massachusetts that boast far-left legislatures, dismal education rates, and sky high economic inequality, while leading the nation in adults who remain living with their parents.

Market Research Foundation also conducted a comprehensive survey of Generation Z – the younger portion of that demographic – consisting of Americans ages thirteen to twenty-three. Our survey analyzed the views of n=1,500 young people on education plans, career outlook, and employment, and tied these views back to demographic data. A number of our findings support Kimbrough’s research, while offering insights into distinctions between Generation Z and Millennials.

While the share of Millennials with a college degree is higher than ever, that hasn’t always translated to economic success – or moving out of mom and dad’s. Kimbrough notes that in 1992, middle-aged men were significantly more likely to have earned a college degree than women or younger men, but now members of every group age 25-34 are more likely to have degrees than those men. In short, the value of a degree has declined as the market has become saturated, and the doors a degree once opened are more difficult to walk through.

Student loan debt, clocking in at a $1.6 trillion, is another factor that makes moving out difficult for young people, but research shows Generation Z is learning from Millennials and is not only more debt-conscious, but more likely to scrutinize the idea that college is necessary. Our survey found that a full 94% of Generation Z believes college isn’t for everyone, and young people should be encouraged to get the education that makes the most sense for their goals, whether that is trade school, an apprenticeship, or starting a small business.

Eighty-four percent of Generation Z says it is possible to be successful and contribute to society in a meaningful way without getting a college degree. Regionally, Generation Zers from Central and Mountain states including Colorado, Idaho, Illinois, Iowa, Michigan, Montana, Wisconsin and Wyoming have the highest proportions of college-ambivalent young people, while those from South and Pacific states have the highest proportions of college-enthusiastic young people. Additional findings include:

It may be tempting to assume these college-ambivalent Generation Zers intend to stay at home playing video games into their 30s, but the data indicates young people with a lower desire to attend college do not believe college is necessary to become financially successful. Ninety-one percent of college-ambivalent Generation Zers think success and contribution are independent of a college education, versus 83% of those highly interested in college and 84% those moderately interested.

We also found Generation Zers from Central and Mountain states including Colorado, Idaho, Illinois, Iowa, Michigan, Montana, Wisconsin and Wyoming have the largest shares of college-ambivalent young people, while states in the South and Pacific regions have the largest shares of college-enthusiastic young people, as shown below. 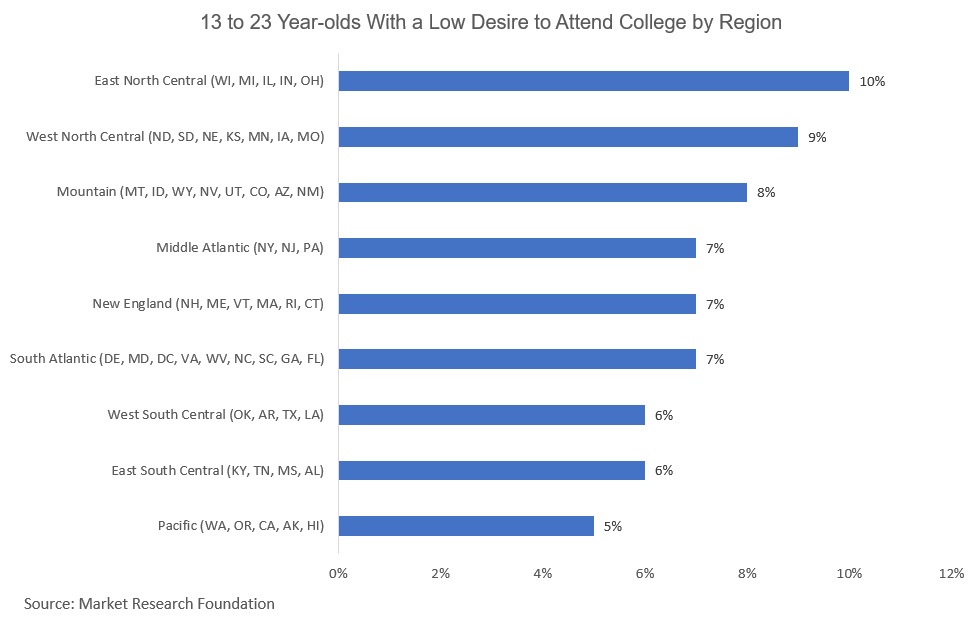 Comparing these findings to Kimbrough’s map of Generation Z living at home by state, it is evident that states with significantly lower than average numbers of young people living with parents boast larger shares of college-ambivalent youngsters. The Central and Mountain states pale in comparison to both coasts and the South in terms of Generation Zers remaining at home into adulthood, as shown below.

Cost of living is often lower in these areas, making rent or a mortgage less daunting. What’s more, these areas include more Blacks and Whites and less Hispanics than other regions on the country. While majorities in all ethnic groups agree that financial success and contribution aren’t dependent on a college degree, this view is less common among Hispanics than Whites and Blacks. Notably, Kimbrough also found that young male Hispanics are more likely than other groups to remain living with parents well into adulthood.

In addition to a high cost of living in suburbia and monumental student loan debt, another factor keeping Millennials from successfully leaving the nest is inadequate employment. According to Kimbrough’s research, this is particularly true of young men living with parents. Young Millennial men are more likely to work just part-time than any time pre-2009. Young women are more likely than young men to hold a college degree.

Generation Z appears to be bucking this trend, in part. While a majority of Generation Zers are still in middle school, high school, or college, the data from our survey indicates Generation Z males are actually more likely to be employed fulltime than females, while females are more likely to be students than males. Fifty-nine percent of young men are students, versus 64% of young women. This indicates a possible self-segmentation process taking place: more young men are opting out of college, but into the workforce, and more young women are choosing college over the workforce. 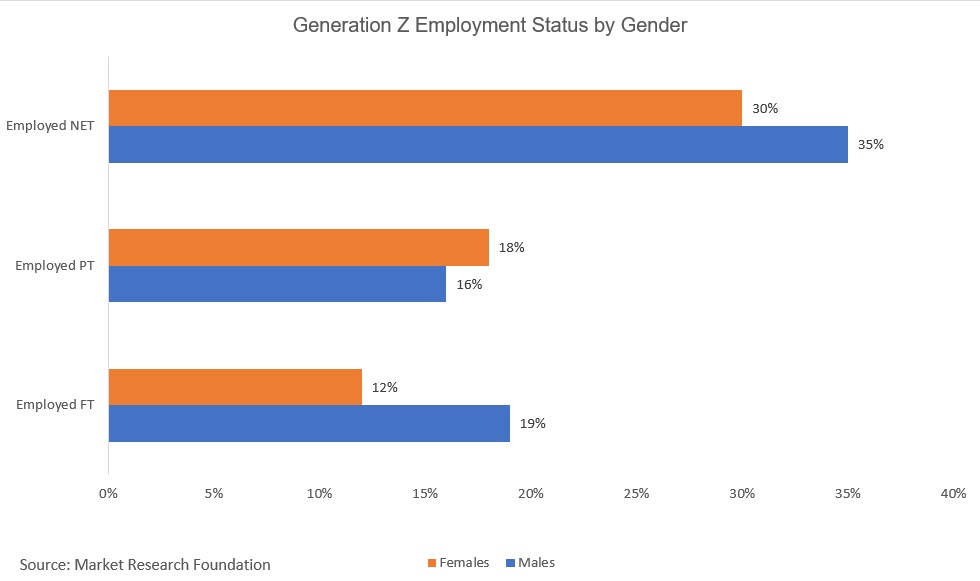 Considering most post-recession education and economic data shows males falling behind females, and Millennial males in particular, these gender deviations in Generation Z are significant. The group most likely to pass on college – young men – is more likely to be employed, suggesting that at least in part, choosing not to go to college is not a decision to delay adulthood or shirk responsibility, but an alternate path to emancipation. What’s more, Central and Mountain states may boast lower rates of college enthusiasts, but they also boast lower rates of young adults living with parents. The majority of Generation Zers haven’t left the nest yet, and economic factors will impact the career and education choices they make as they enter adulthood. But these findings indicate Generation Z is different from Millennials. The same demographics might be opting out of college, but perhaps for different reasons and with more success.