The recent YouGov–Victims of Communism Memorial Foundation poll is full of chilling findings on young people’s openness to communism and Socialism and muddled understanding of the terms fueled by a communist-friendly educational system. The survey found that 70% of Millennials – ages 23 to 38 in the poll – say they’d vote for a socialist. Both Millennials and Generation Z – ages 16 to 22 in the poll – are much more likely to report communism being presented ‘favorably’ from grade school through college than older generations. The term Communism jumped 8 points in favorability among Millennials, and the term Marxism has the highest favorability among Millennials of all age groups.

However, the poll offers glimmers of hope among Generation Z. Thirteen percent of those polled fall into this group, young people between ages 16 and 22, and while Gen Z isn’t fully rejecting Socialism and communism, they hold major reservations, especially compared to Millennials just a few years older.

For one, support for Socialism dropped substantially among Generation Z, from 48% in 2018 to 40% this year, as shown below. 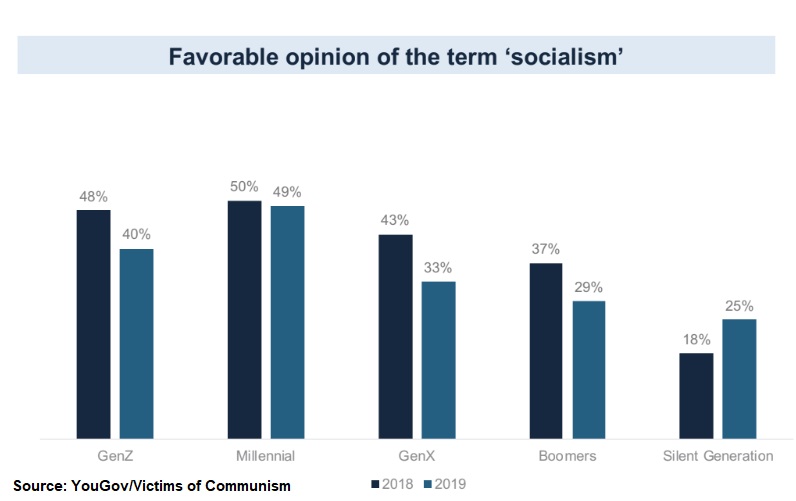 This represents a nearly 17% decline in favorability for Socialism among high school and college students. Keep in mind for many Generation Zers 2020 will be their first presidential election. While the far-left may be celebrating the slew of socialists running for president in the Democratic primaries, recent depictions of Socialism have evidently turned off Generation Z significantly. 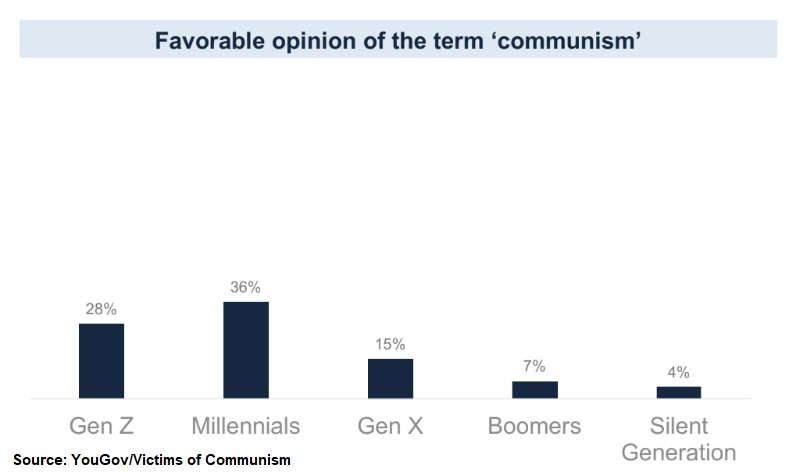 Young people in high school and college are just beginning to form their own opinions on government, and the radical-left’s embrace of Socialism is apparently backfiring – for now. Generation Zers are emerging from an educational system that demonizes capitalism and praises communist governments as sane options, and facing arguably the most radical collection of individuals ever to run for president of the United States at once. The educational system, the media, and the Democratic Party, are all pushing to normalize Socialism, and they are targeting Generation Z just as fervently as they targeted Millennials. Conservatives have an opportunity this year to engage with Generation Z, validate their concerns about Socialism, and most importantly, offer alternative solutions.