Leading up to President Trump’s 2016 victory, pollsters, analysts, and the mainstream media failed to see the coming storm: white blue-collar voters without a college education. These voters turned out in record numbers and propelled the President over the finish line, and very few DC elites saw it until it was done. ‘No college’ Whites continue to shift toward the GOP, increasing the educational divide between Democrats and Republicans. But does higher-education always correlate to a higher likelihood to support Democrats? 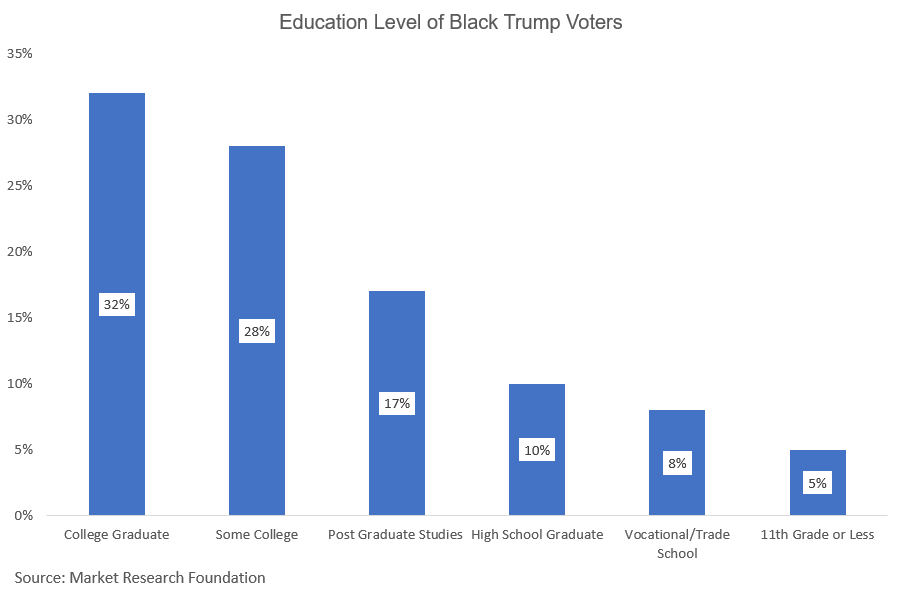 The U.S. Census indicates 14% of Black Americans hold a Bachelor’s Degree and 7.8% hold a Graduate Degree, and degree attainment is significantly higher in Western states including Arizona, Colorado, Hawaii, and New Mexico, as well as Maryland and Massachusetts on the East Coast. It is not an unusual that higher educated Blacks are more likely to vote than those with lower-levels of education. This is true for Whites as well. What is novel is that as education rises among Black voters, so does Republicanism. This finding was recently validated by outside data. A September 2019 The Hill-HarrisX survey conducted among Black voters found:

A significant share of Black voters in our research favor stronger border security and hold favorable views of President Trump. This group is largely male, between ages eighteen and forty-four, politically Independent, twice as likely to consider themselves Very Conservative on moral issues as Black voters overall, more likely to own a business, and more likely to attend church regularly. They also tend to reject the victim hood narrative.

“These young people did not think of themselves as victims. They recognized their good fortune as Americans living in a country of opportunity where their own future will be bright if they work hard.”

We found Generation Z, Millennial and Generation X Black males between ages 18 and 45 who attended church at least once per month were significantly more likely than the average Black Voter to have voted for Trump in 2016: 25% versus 10% for Black voters overall. These numbers could easily climb higher in 2020 especially among men. According to statistical analysis by YouGov and The Economist, the gender gap for party affiliation is actually wider among Black voters when compared to White and Hispanic voters. The Hill-HarrisX survey found 32% of Black men would back President Trump over any Democratic challenger. Those numbers rise to a full 42% of Black men between ages 35 and 49. With Black unemployment at record lows and a series of influential Black conservatives throwing their support behind him, Trump could raise those numbers in 2020.