Gone are the days when a handful of news networks were the primary sources of information about elections, economics, environmental issues, war, crime, and international affairs. Increasing numbers of Americans, particularly younger Millennials and Generation Z, seek out and cultivate their own sources of information through peer-sharing sites like Reddit, YouTube, and Twitter. Instead of passively consuming the narratives cultivated by talking heads on TV, individuals share eyewitness accounts, scientific studies, raw crime statistics, polling data, and a plethora of source information directly. As corporate media has consolidated, wiping out trusted local papers, a tide of peer-sharing platforms and independent content creators are rapidly filling the information void. GateHouse Media and Gannett recently joined forces but are still threatening $400 million in cuts, and McClatchy appears near bankruptcy. Meanwhile, more Americans are calling out bias and inaccuracy in mainstream reporting with the ‘fake news’ moniker. This convergence of mistrust in mainstream news narratives and the rapid decline of local newspapers is giving rise to equally decentralized views, especially among younger Americans. 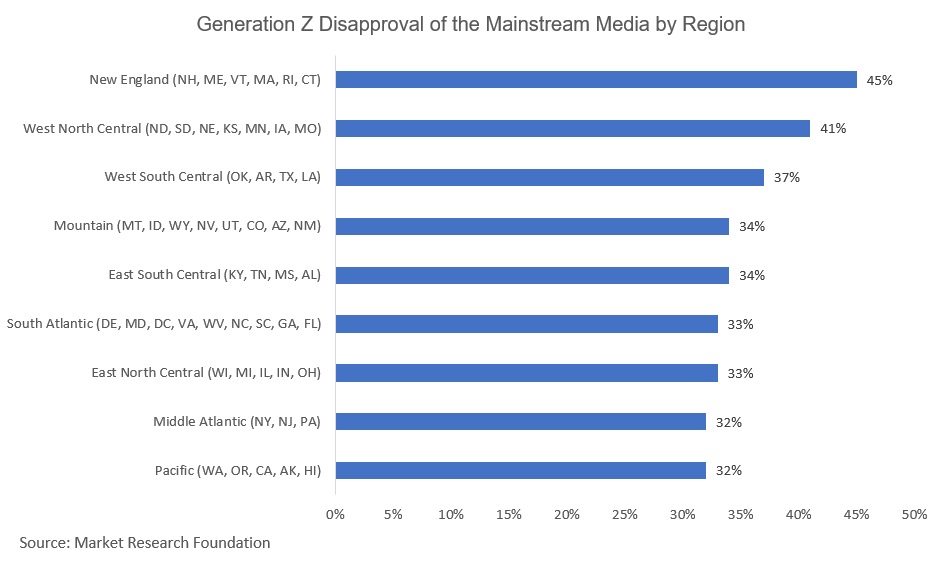 A recent YouGov survey also found mistrust in the mainstream media is significantly higher among young people under thirty, compared to older Millennials between age 30 and 44. YouGov asked respondents to indicate how often they thought mainstream news sources reported fake news, and 61% of 18 to 29-year-olds said, ‘sometimes’ or ‘most of the time’ compared to 53% of 30 to 44-year-olds. Like the Market Research Foundation data, YouGov’s survey revealed a strong correlation between conservative or independent views and mistrust of the mainstream media.

Eighty-seven percent of Republicans and 59% of Independents think the mainstream media reports Fake News ‘sometimes’ or ‘most of the time’, versus 42% of Democrats, as shown below.

There is also a strong correlation between mistrust in the mainstream media, and a desire to opt out of the traditional college path among young people. Forty-eight percent of young people in the MRF survey with a low desire to go to college disapprove of the mainstream media, versus 32% of young people with a high desire to go to college. Part of the reason for a convergence of mistrust in the mainstream media and the traditional four-year-college path, appears to be mistrust in authority figures in general among young conservatives. A new Institute of Politics (IOP) at Harvard Kennedy School poll found young Republicans are significantly less comfortable sharing their political views with professors compared to young Democrats and Independents. Only 35% of college-age Republicans say they’d be comfortable sharing their political views with professors, versus 54% of Democrats and 51% of Independents. This data suggests that even young conservatives who do pursue the college path have learned to keep their mouths shut about their political views to get by. This finding has major implications for polling analysis, given that young people highly mistrust the mainstream media outlets conducing polls and reporting on the results.

Mainstream analysts have been consistently underestimating the appeal of conservative candidates ever since President Trump secured the presidency and proved all but a few polls wrong. While fake news, inescapable bias in polling, and a tendency for leftwing groups to adopt optimistic predictions is partly responsible, the Bradley Effect could be significantly stronger in young conservatives. Young people are particularly wary of sharing their views with authority figures, whether professors or pollsters. A rejection of the mainstream media and fake news is not necessarily a partisan issue, but it does tend to coincide with conservative and independent views. This shouldn’t surprise anyone given the mainstream media’s relentless left-wing bias. What it can do is serve as a reminder that young conservatives and independents are less likely to share their policy views with authority figures than their liberal peers, and their trust in mainstream news is minimal.