Generation Z – young people born after the mid-1990s –captured the interest of market researchers and political analysts this year, in part because of their sheer numbers. These young Americans, many of whom are still in middle and high school, outnumber every other living age cohort in the nation at 26% of the population. They will play a pivotal role in the direction of the country for several decades over a range of economic, fiscal, social, and civic issues. Generation Z is already politically active, with midterm youth-voter turnout up 47% in 2018 from 2014, according to the Center for Information and Research on Civic Learning and Engagement.

Yet, analysts and commentators present two seemingly contradictory narratives about this generation. Take a cursory glance at the political commentary and cherry-picked polling surrounding Generation Z and you may be wondering whether conservatives stand a chance with young people. The political left tends to portray Generation Z as simply a younger and more radical version of the Obama-loving, minimum-wage-hiking, Green-New-Deal embracing, gender-confused Millennial. The left is banking on their ability to captivate and turn out Generation Zers for Democrats, and the mainstream media is all too willing to reaffirm this optimistic outlook.

This optimism is misplaced. An increasing body of research shows Generation Z holds more conservative and cautious views than Millennials, strongly prefers working within the existing political system to ‘radical and disruptive change’, is determinedly anti-foreign-intervention, supports America-First policies, believes deeply in the rule of law, is less likely to take knee-jerk positions against conservative positions and public figures.

Market Research Foundation began looking at Generation Z as a separate economic-political force from Millennials last year, after an increasing body of research made it obvious this was a necessity. We aggregated outside research from institutions like Pew Research Center, The Hispanic Heritage Foundation, YouGov, and the Harvard Institute of Politics, and conducted our own comprehensive poll of n=1,500 members of Generation Z between age thirteen and twenty-three.

Our polling finds overwhelming support for stances that put America First, non-interventionalist foreign-policy, and strong border security that upholds the rule of law.

Market Research Foundation polling also indicates that a majority of Generation Zers across the political spectrum reject radicalism in favor of working to change government from within. We asked young people to indicate their support for three statements on their preferred approach to activism, and found that 63% of young people want to fix the system from the inside, while just under 21% want radical change, and 16% aren’t sure they agree with either method, as shown below. 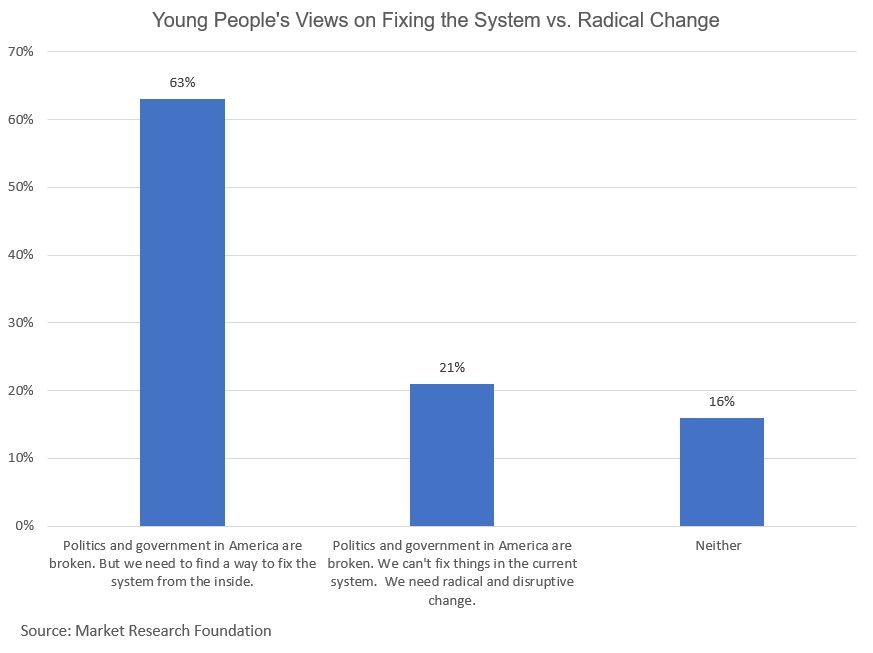 Harvard Youth Poll data validates this finding. Data dating back to 2008 shows the share of young people today who identify as liberals has declined by a remarkable 41 percent since Obama stepped into his second term. The share of young moderates has more than doubled over the past 11 years. The Harvard Youth Poll from 2008 showed a full 46 percent of young people considered themselves liberal or liberal-leaning, while 19 percent considered themselves moderate, and 35 percent considered themselves conservative or conservative-leaning. A majority of those respondents are now in their thirties, and while their views remain relatively stable, the views of today’s young people are significantly more moderate. Just 27 percent of today’s 18 to 29-year-olds now consider themselves liberal — a 41 percent decline in liberal affiliation since 2008. Meanwhile, the share of young people who now consider themselves moderate has more than doubled, from 19 percent in 2008 to 45 percent in 2019.

Additional third-party research including a 2018 study from Public Religion Research Institute found that Trump is viewed favorably by more than 4 in 10 young white men, and that young white men hold increasingly conservative views across a range of issues including reverse discrimination and LGBTQ issues. Glancing back at the 2016 election, a national survey of approximately 50,000 high school students on the presidential election and political and economic attitudes, found the majority of Generation Z identifies as Republican. The survey, conducted by My College Options and the Hispanic Heritage Foundation, found Trump led Clinton 46 percent to 31 percent for first-time voters, and 42 percent to 17 percent among Generation Z males.

What matters most for the future outlook of the country is which ideology the majority of young people embrace, and which constituencies are the most engaged politically. On the first matter, the outlook is bright for conservatives: only 21% of Generation Z believes in radical and disruptive political change and the average young person in 2019 is less liberal than in 2008. However, the left may have an upper-hand when it comes to political engagement – for now. It is vital for conservatives to engage Generation Z and offer alternatives to the socialist politicians banking on their support.  In the coming weeks we will include additional research on Generation Z’s fiscal outlook, and views on higher education.