A new Washington Post-Ipsos poll of Black voters is making headlines, and the mainstream media is running with the absolutely exhausted narrative that 8 in 10 Black Americans think Trump is racist. The pollsters made the polling data public, which means we’re able to examine how the opinions of African American voters differ by various criteria – like age, region, and education level. Here are several findings from the poll that might not put you directly to sleep.

With a Black unemployment rate reaching historic lows under President Trump, it shouldn’t be surprising that 65% of Black Americans feel optimistic about their lives all or most of the time. Twenty-five percent feel optimistic sometimes, and only 11% rarely feel optimistic, as shown below. 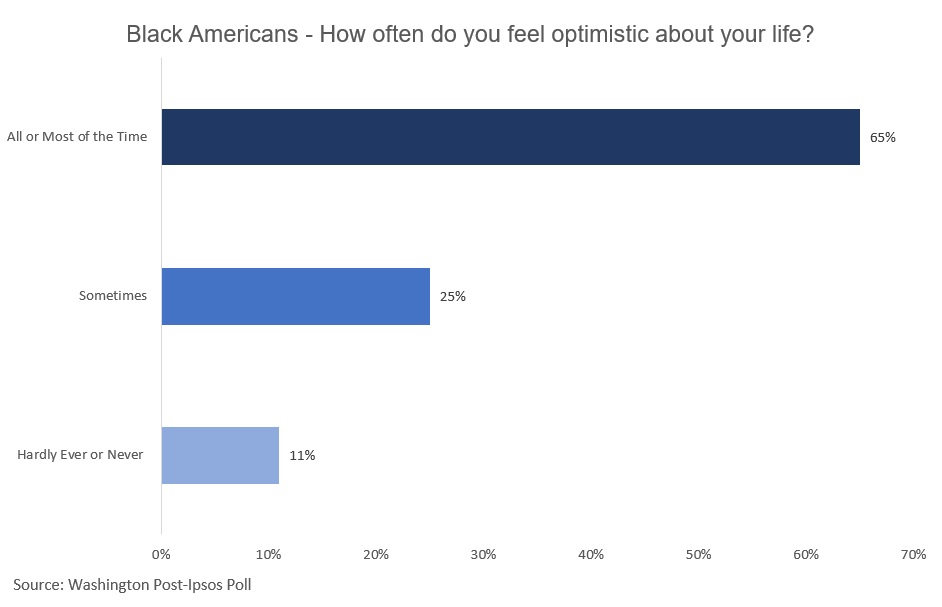 African American conservatives and college grads are particularly optimistic about their own lives all or most of the time.

This finding indicates that among African Americans in particular, higher education is still a means to a better quality of life.

Another similarity between higher educated African Americans is a lower likelihood to believe the president is racist. Seventeen percent of college grads say President Trump is not racist, compared to 12% of those with some college or a high school education, as shown below. This represents a 29% difference in views on Trump by education level. 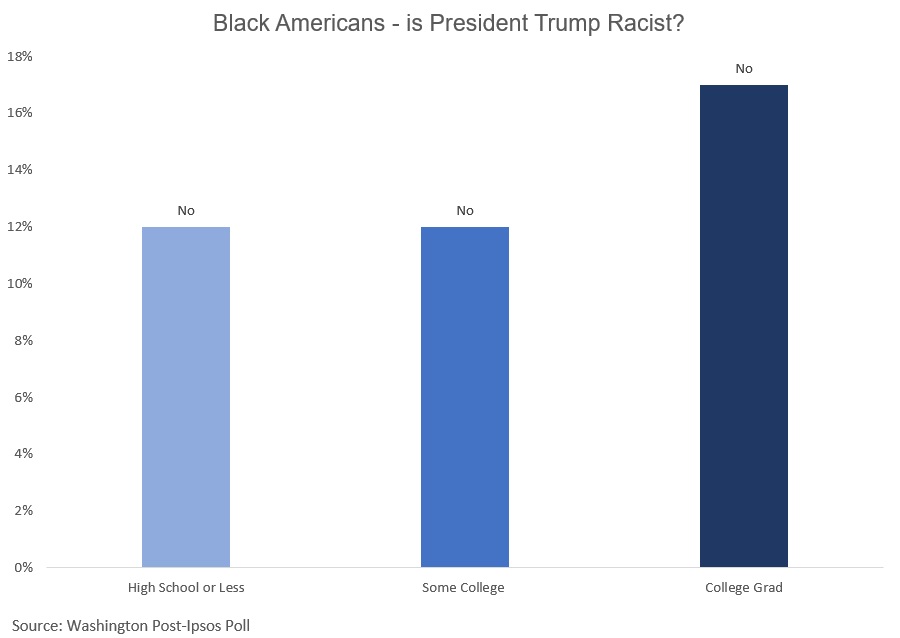 When asked whether they approve or disapprove of President Trump’s handling of his job as president, region stands out as a dividing variable among African American voters.

Trump approval is highest among Black Americans from Western states and lowest among those from the Northeast. Westerners hold an approval rate 67% higher than that of North Easterners.

Interestingly, African Americans from Western states aren’t just more likely to think Trump is doing a good job, they remember former President Obama less fondly as well. When asked if they think Obama’s actions were good, bad, or neither, Western Blacks said ‘bad’ at twice the rate of Midwestern and Southern Blacks.

President Trump is clearly still not the first choice for Black voters, but in key segments he commands an approval rate double or triple the 8 to 10% he earned in 2016. Trump won in 2016 in large part due to economically distressed White voters, but the average African American Trump supporter is motivated less by distress and more by hope. His African American base is also younger not older, more likely to be a college grad not less, upwardly mobile, and optimistic. His strongest support stems from African Americans in Western states where race relations are less strained. Analysts should commit to additional polling and segmentation to understand how optimism motivates Black and White voters differently across party lines.