The 2020 electorate includes a record number of naturalized citizens, and Democrats are hoping to flip swing states like Florida and Pennsylvania into their control this November. Roll Call recently pointed out the impact newly naturalized citizens will have in 2020, noting that First Generation immigrants make up as much as 10% of the electorate. Using the United States Census naturalization tables and accounting for newly naturalized children and possible delays due to the corona virus, the estimate is between 9.5% and 10% of the electorate.

There is evidence the First Generation political impact could be substantial in the 2020 election and beyond. Naturalization tends to spike during election years as new immigrants prepare to become American citizens. What’s more, the largest groups of newly naturalized immigrants – Hispanics and Asians – tend to vote at higher levels than native-born Hispanics and Asians according to the Pew Research Center. While immigrants make up an increasing share of the electorate in 2020, several studies challenge the idea that this will help Democrats.

Market Research Foundation’s nationwide survey of 1,751 First Generation Americans from across Europe, Africa, Asia, the Middle East, Canada, and South America, found a majority self-identity as moderate or conservative. What’s more, the fastest growing immigrant group – Asian Americans – is one of the most politically engaged, and their support for Democrats dropped precipitously between the 2012 election and the 2016 election. Finally, unlike among the natural born electorate, higher educational attainment among First Generation Americans is negatively correlated with support for Democrats.

Higher Educational Attainment is Linked to Lower Support for Democrats

As the corona virus throws the country into an economic-health crisis, Democrats looking to capitalize on immigrant voters in prized swing states like Florida could face an uphill battle. Market Research Foundation’s First Generation survey found that a majority of Florida immigrants are conservatives or moderates on healthcare and the economy.

Forty-one percent of First Generation Floridians identify as moderates on healthcare, while 29% identify as liberal, and 30% identify as conservative. Taken as a whole, 71% of Florida immigrants reject liberal healthcare policies as shown below. 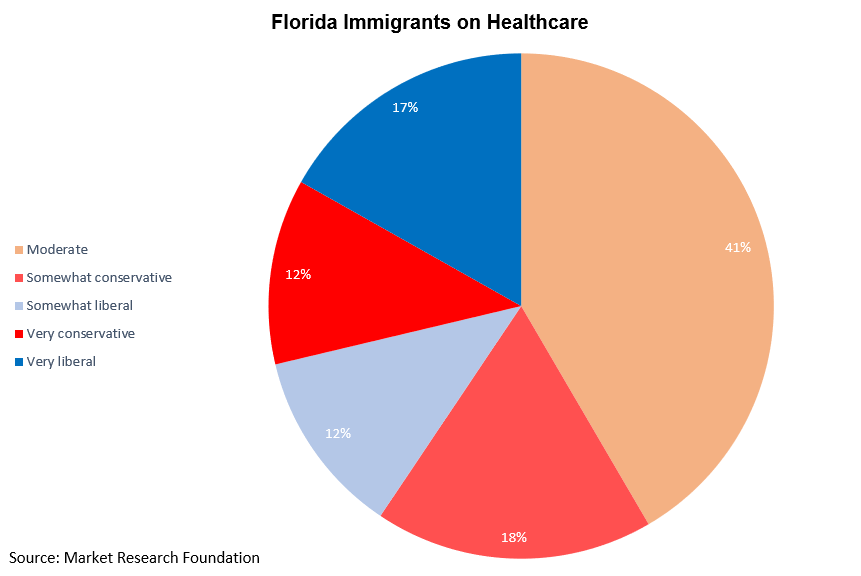 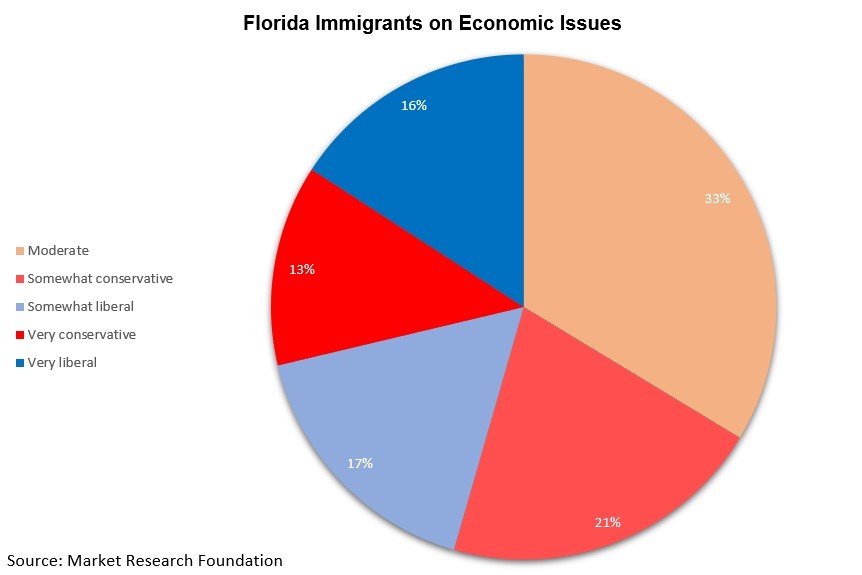 Chinese Americans Surpass Other Groups, and Their Support for Democrats Dropped Between 2012 and 2016

First generation immigrants from Asia are the fastest growing immigrant group in the U.S. according to Pew, and while they account for about 4% of voters, their concentrations in key swing seats this election should put them on the GOP’s radar. But there is longer-term importance to securing Asian American support for conservative policy positions. Asian-Americans are projected to become the largest immigrant group in the country, surpassing Hispanics, by 2055.

Chinese Americans make up the largest share of Asian voters, and their support for Democrats dropped between 2012 and 2016 according to the National Asian American Survey.

Obama won 81% of Chinese Americans in 2012, but that dropped to 73% for Clinton in 2016. There was significant deviation in Trump support by nation of origin in the 2016 election. Trump secured the highest levels of support from Vietnamese Americans, 33% of whom voted for him. Trump did significantly better with foreign-born naturalized Asian voters in 2016, compared to native-born Asians voters. While he won just 8% of native-born Asians to Clinton’s 88%, among foreign-born naturalized Asian voters Trump won 22% to Clinton’s 77% according to a comprehensive analysis by the Asian American Legal Defense and Education Fund.

The vast majority of immigrants are moderates or conservatives and Democrats are losing support form the most rapidly growing immigrant group, Asian Americans. First Generation Americans are a growing share of the electorate, but this does not make them default Democrats. The data shows naturalized voters turn political conventions upside down, showing higher political engagement than natural-born groups, and taking a more critical view of the Democrat Party as education increases.