The new Harvard Youth Poll of 18 to 29-year-olds is making headlines, but the mainstream media is missing the rise in third party voters, and broad Trump support among young people Harvard is labeling ‘Multicultural Moderates’ and ‘Disengaged Voters’. Previous research on Generation Z and Millennial voters showed a significant drop in liberal affiliation among younger Americans in recent years, a steep decline in support for Socialism, and increasingly conservative views among young males and those from the East Coast in particular. Here are the biggest takeaways from the latest Harvard Youth Poll.

While the hard left would like to think ‘the youth vote’ is reliably Democrat, a surprisingly small number of Generation Z and younger Millennials actually consider themselves Democrats. While the share who consider themselves Republican is also small, a majority of young people do not affiliate with any party. A full 60% of young people say they belong to neither party, while less than a quarter (24%) say they are Democrats and 14% say they are Republicans, as shown below. 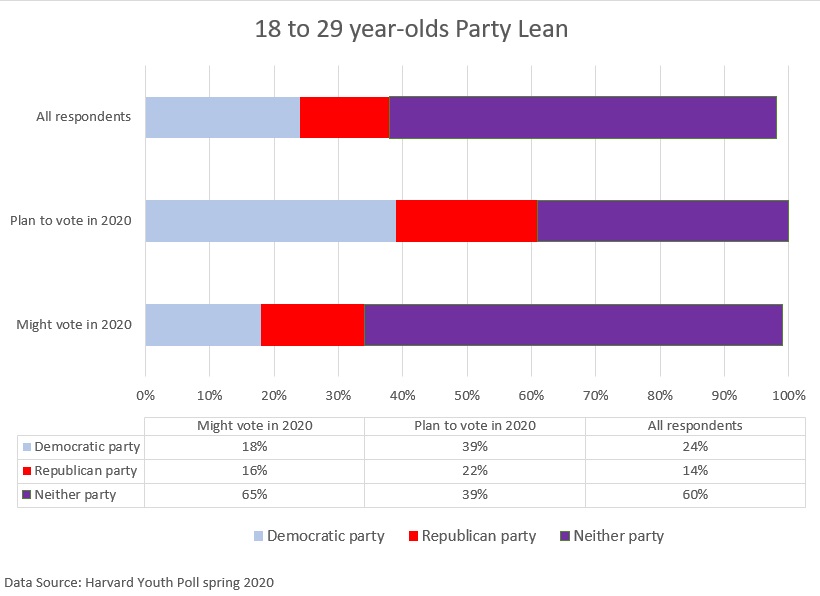 Despite the left’s best efforts to earn youth vote loyalty, young voters are extremely reluctant to identify with either party even if they fully intend to vote in 2020. Almost 40% of those who say they are likely to vote in 2020 refuse to identify as either Democrat or Republican.

A Majority of Young Americans Identify as Moderates

Moderate voters are also over-represented in the group uncommitted to voting but considering it. Over half of young people who say they might vote but aren’t sure (56%) say they are Moderates, as shown below. 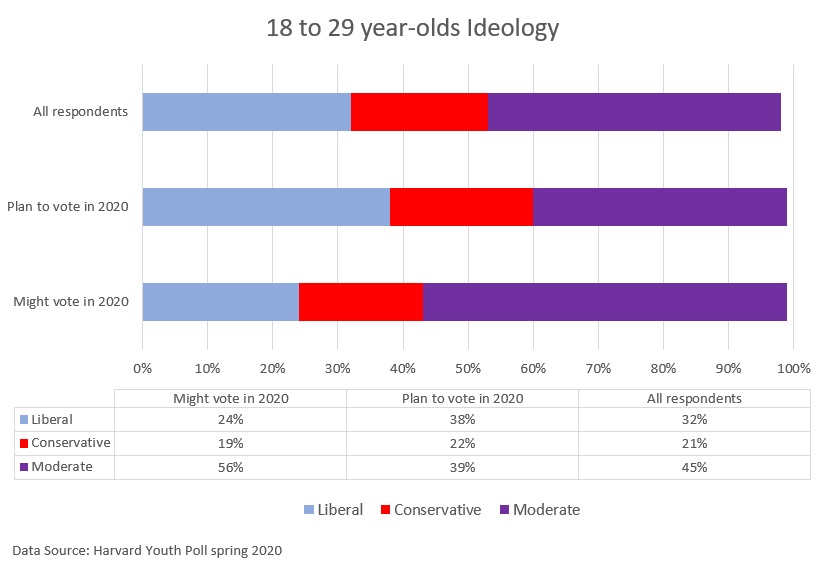 Trump has Significant Support from Multicultural Moderates, Disengaged Voters, and the MAGA Generation

Harvard introduced new categories to group young people into, and Trump earned surprisingly high support from what the researchers dubbed ‘Multicultural Moderates’ and ‘Disengaged Voters’, as well as cleaning house with the ‘MAGA Gen’. While 33% of young Americans say they will vote for Trump or are considering voting for him, that climbs to 81% among the ‘MAGA Gen’, 46% among ‘Multicultural Moderates’, and 42% among ‘Disengaged Voters’ as shown below. 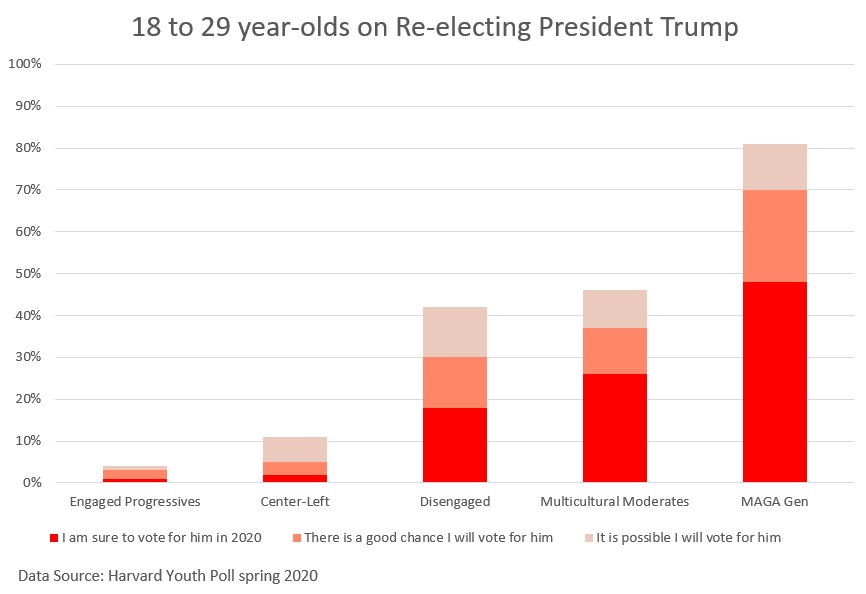 White Generation Z and Millennial voters showed the highest support for re-electing Trump, but the President has significant support from Black and Hispanic young people as well. Forty percent of young Whites, 25% of young Hispanics, and 23% of young African Americans say they are either voting for Trump in 2020 or considering it.

The latest Harvard Youth Poll shows younger voters are largely moderates and independents, and a diverse group are open to supporting President Trump’s re-election in 2020. With Biden’s faltering efforts to win over young people, now is the time for Trump to reach beyond his die-hard MAGA Gen supporters and build inroads with young moderates and disengaged voters who are on the fence.