The Latino vote is a shifting target, but Republicans appear to be the beneficiaries of changing sentiment and new polling shows Trump could win a Latino landslide. A new NPR/PBS News Hour/Marist poll shows Biden spectacularly underperforming Hillary Clinton’s numbers with Latinos, and Trump widely outperforming his own 2016 numbers. Hispanic enthusiasm for Democrats was already dwindling in 2016, when Clinton underperformed Obama’s 2012 numbers with just 66% of the vote compared to Obama’s 71%. Despite a firestorm of rhetoric from the mainstream media portraying President Trump as anti-Hispanic, he won a comparable share to that of Mitt Romney in 2012 – 28% versus Romney’s 27%. Biden, meanwhile, is on track to perform worse than Clinton with Hispanics, and much worse than Obama.

A number of recent polls show President Trump’s favorable numbers among Latino voters have risen significantly higher than the 28% of the vote he won in 2016. A June 30th report by the Pew Research Center shows Biden might barely eke out the same dwindling share of the Hispanic vote as Clinton did in 2016, but Trump would easily improve on his margin with Latinos in 2020. This indicates third-party, independent, and soft-Democrat Hispanic voters are shifting toward Trump, not Biden. Pew shows 32% of Latinos would back Trump if the election were held today, up from the 28% of the vote he achieved in 2016.

But Trump’s numbers could climb higher. Other polls suggest Biden will earn a much smaller share of the Hispanic vote than Clinton did. The June 26th NPR/PBS News Hour/Marist poll shows Biden significantly underperforming Clinton with Latinos – just 59% now say they’d back Biden for President, while a full 39% say they would back President Trump. A recent Zogby poll echoed this sentiment, showing President Trump’s approval rating sat at 51% with Hispanics.

There are a number of reasons why Latino support for Trump is rising, but two key accelerators are a concern for the economy, and a concern for public safety. The foreign coronavirus that wreaked havoc on the U.S. and global economies over the past four months reversed a great deal of President Trump’s economic legacy this spring. At the close of 2019, unemployment had reached historic lows for all Americans, including Black and Hispanic voters, and the stock market was soaring. That all changed when China failed to contain the deadly coronavirus, and the threat of mass illness and death led the U.S. to lock down the country, leaving millions out of work.

In one sense, the grave economic situation during the worst of the coronavirus lockdown gave voters every opportunity to turn against President Trump. The mainstream media, for their part, relentlessly bashed his approach to balancing public health needs and economic stability. Latinos were one of the hardest hit groups when covid-19 shuttered a vast swathe of American businesses, and at the height of the pandemic Latinos had an unemployment rate over 18%. Despite these struggles, Latinos are significantly more optimistic about a rapid economic recovery compared to both Blacks and Whites. They are also increasingly economically-motivated voters, especially Latino men. Equis Research polling shows that Latino men are particularly concerned about the impact of the coronavirus on the economy, and this may be driving support for Trump over Biden compared to women. Below is a state-by-state graphic by Equis showing candidate lean by gender among Hispanics.

Factor two driving Latino support for President Trump is the clear division between how the left and right view public safety, law and order, and basic protections for life and property. The riots, looting, theft, and subsequent homicides that spread like wildfire across the country in the wake of the tragic death of George Floyd exposed the left’s tolerance for destruction and unwillingness to condemn lawless anarchists. President Trump meanwhile, has maintained that senseless violence and property destruction will not be tolerated, and Latinos appear particularly receptive to calls for law and order.

In June, Market Research Foundation analyzed polling data on President Trump’s approval and found Trump gained support among both Black and Hispanic voters in the week after the riots and looting escalated. YouGov polling from late May before the chaos ensued showed President Trump’s approval rating at 39% with Hispanics, and 12% with Blacks. Polling taken in early June as the riots escalated showed his approval rating jumped to 42% with Hispanics and 18% with African Americans, as shown below. 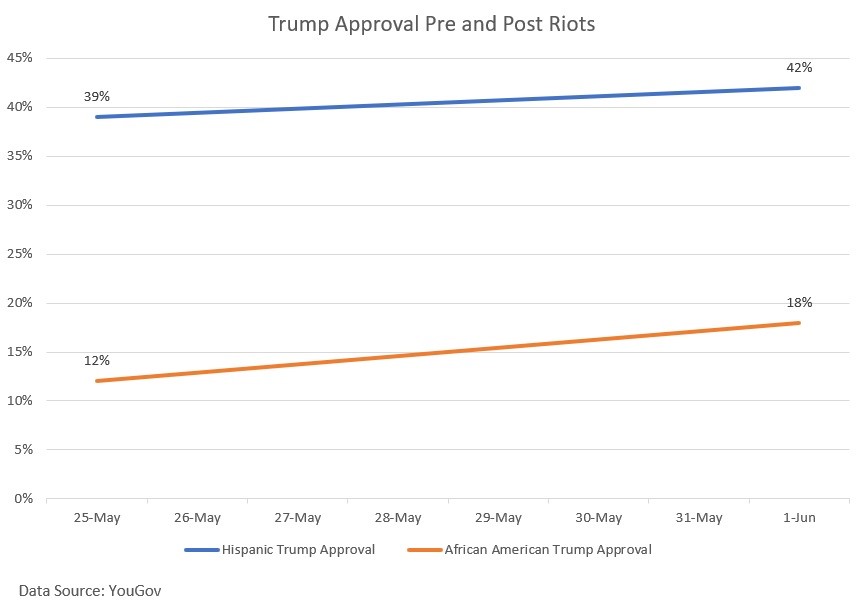 This wasn’t a temporary bounce for Trump either. Swing voters are rapidly making a choice between the antifa-tolerant left, and conservatives who promise to at a minimum restore some semblance of order. In mid-June, polls showed two-thirds of Americans oppose the ‘defund the police’ demand, including 58% of Hispanics. YouGov’s running analysis of how the public rates President Trump’s tweets consistently reveals high Hispanic support for cracking down on criminals and restoring law and order. Trump’s June 30th promise to catch and prosecute those who vandalized the George Washington statue in Manhattan was favored by 65% of Hispanics as shown below.

One month prior, Trump’s Twitter statement calling out Minneapolis Mayer Jacob Frey for not defending the city from looters and rioters was viewed positively by 52% of Hispanics as shown below. 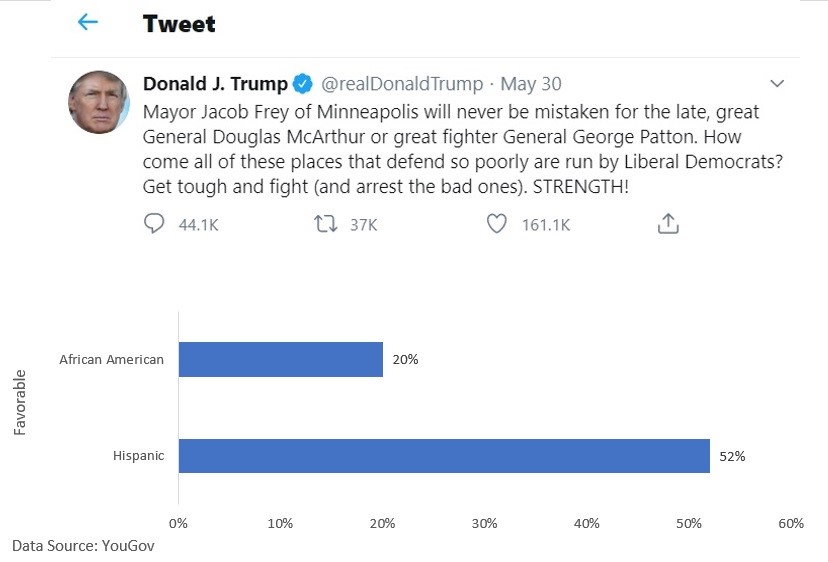 While the mainstream media churns out headline after headline painting President Trump as a doomed incumbent with plummeting support, Hispanic voters are quietly moving away from Biden, and toward Trump. They are driven by economic concerns, as well as public safety concerns. President Trump is still seen by a majority of Americans as a better steward of the U.S. economy than Biden, and a strong voice for law and order, and those two priorities are aligned with the interests of a growing number of Latino Americans.