This November California will vote on a measure that would dismantle the state’s 1996 ban on discrimination based on race, sex, or ethnicity in university admissions and public employment. Yes, that’s right. California is voting to remove protection against institutionalized discrimination. The measure on the ballot this fall is ACA5, and it repeals Proposition 209, passed almost a quarter-century ago to ensure equal consideration for all in college admissions, public employment and contracting.

Proponents of ACA5 cloak the legislation in the feel-good phrase ‘affirmative action’ and promise it will eliminate inequality, but politically correct terminology does not erase the fact that this legislation enables the government to legally discriminate against citizens based on race and gender. A majority of Americans oppose race-based admissions policies in universities when the question is asked explicitly, but favor ‘affirmative action’ as a vague theoretical concept. A 2019 Pew Research Survey found that 73% of Americans oppose race based admission policies, but a 2014 Field Poll of Californians found 66% approve of discriminatory policies when framed as ‘affirmative action’. Leftists are masters at taking unpalatable policies like discrimination, wealth redistribution, property theft, and war, and framing them as positives. “Affirmative action”, “economic equality”, and “peace keeping” are an easier sell to the public.

That’s not to say that many Americans can’t see through the rhetoric to the harm these policies inflict on certain groups. In California, ACA5 is facing strong pushback from Asian Americans, many of whom fear the repeal of Proposition 209 will deny otherwise qualified Asians entry into universities, public roles, and government contracts. Their fears are not misplaced. Over the past few years, the veil of quota-based admissions has been lifted somewhat, revealing racist policies that unfairly penalize white and Asian Americans, with Asians fairing the worst. In 2009, Princeton sociologist Thomas J. Espenshade found a vast discrepancy in SAT scores required for undergraduates at competitive colleges, with Asian students being required to score 140 points above whites and 450 points above blacks on average. Legalized discrimination like that in ACA5 would increase this injustice in California universities as well as employment and contracting.

Social Justice Warriors have been attempting to overthrow Proposition 209’s ban on legalized discrimination for several years. In 2014, an earlier version of ACA5 appeared on the ballot and was rejected, in large part due to an active coalition of Asian parents. Chunhua Liao, who led the successful rejection of ACA5 back in 2014, is once again working with a coalition of parents to beat back the 2020 version. Asian Americans, many of whom are First Generation immigrants from countries like China, often have personal stories of the racism endured in their home countries. Many moved to the United States to be judged by their own merit, and find the affirmative action policies that penalize them for their success unjust and un-American. Jason Xu, vice president of the Silicon Valley Chinese Association Foundation which is working to keep the protection offered by Proposition 209 from being dismantled, said, “I want people to judge me by the content of my character, not the color of my skin. That’s one of the reasons the United States is the best in the world. Because it’s merit-based.”

California’s Asian American population should not be underestimated. According to the United States Census, Asian American citizens represent 3.2 million voters, or 13.15% of the state’s voting age population. Voting-age Asian citizens make up over 25% of the population in four California counties: San Francisco, Santa Clara, San Mateo and Alameda, as shown below. 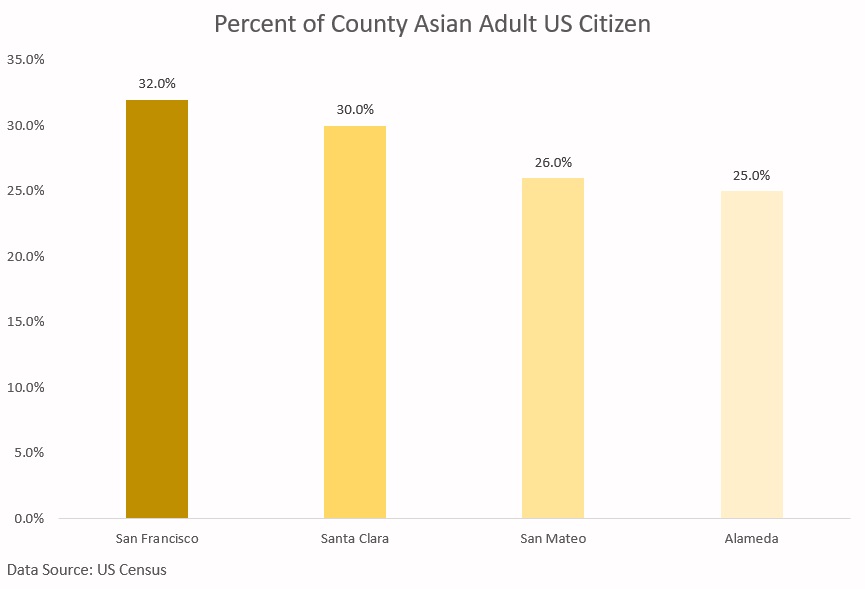 An additional nine California counties have Asian adult citizen populations of 10% or greater, as shown below.

Californian’s have their work cut out for them heading into the November election if they are to beat back the latest attempt to legalize discrimination, but they may find hope in their neighbor to the north. Washington, no one’s idea of a bastion of conservative values, narrowly rejected a similar attempt to legalize discrimination last year, when ‘affirmative action’ zealots attempted to repeal the state’s ban on race-based admission and employment policies. Like in California, a great deal of the opposition was led by Asian Americans, and Washingtonians managed to reject the legislation 50.56% to 49.44%. This year, Asian Americans in key California districts will be pivotal in preserving equality under the law and rejecting legalized discrimination.