A growing majority of Americans oppose any effort to defund the police, but Biden was caught on tape endorsing exactly that. Speaking to far-left media outlet NowThis Biden said police have “become the enemy”, and endorsed slashing police budgets and diverting resources elsewhere. Since then, he has doubled down on siding with the far-left agitators destroying American cities from coast to coast. He called the Portland riots “peaceful”, despite the fact that the city endured 52 consecutive nights of violence before federal officers were deployed there. Portland rioters have since toppled a courthouse fence, set several sites on fire, and injured multiple officers. Similar riots erupted over the weekend in Seattle, Oakland, Los Angeles and elsewhere, but Biden has yet to disavow the riots or commit to protecting police budgets in American communities. This could cost him big, especially in the suburbs.

A new Rasmussen poll shows 66% of Americans oppose any attempt to divert funds away from police budgets, up from 59% in early June. The poll also found 61% of Americans think violent crime will rise in communities that defund the police, and 64% worry that increasing criticism of police will reduce the number of individuals going into police work, and thus reduce public safety. Meanwhile, 67% rate their local police as good or excellent.

Sixty-seven percent of suburbanites also believe the police operate fairly most of the time, 74% say funding for police departments should remain the same or increase, and less than half believe any reform is needed. Suburbanites also reject the politically correct revisionist demands by the far-left to remove statues of confederate soldiers 57% to 43%, and 75% think local governments should block groups attempting to destroy the statues. Below is a summary of suburban views. 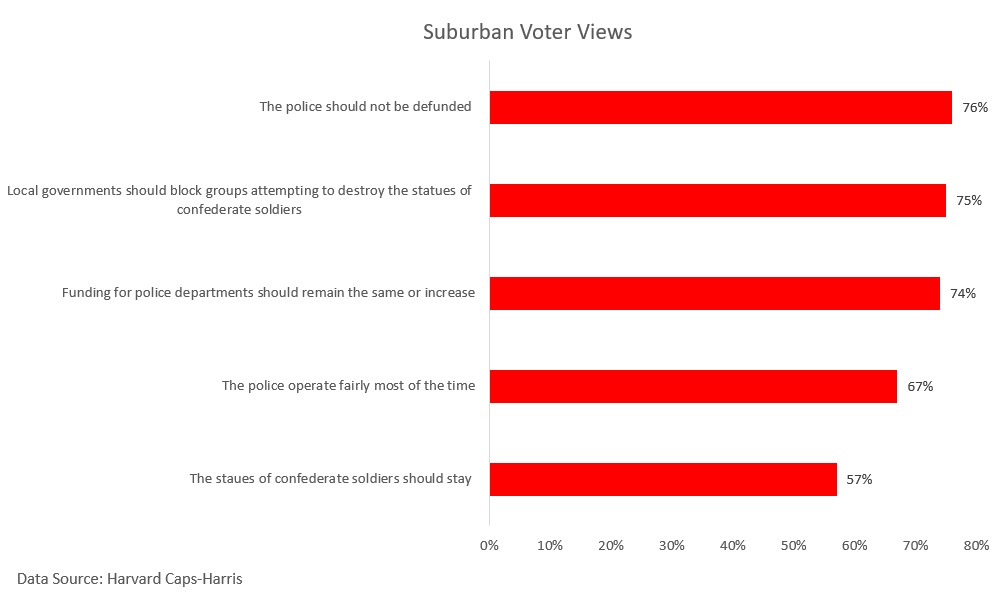 While Biden is avoiding interviews and Tweeting up a storm about how in ‘100 days’ he’ll beat President Trump, American cities are under siege. His anti-police rhetoric and promise to divert funding from police departments may play well with far-left progressives, but he is risking alienating moderate Democrats, particularly those in the suburbs.