President Trump is fighting hard for the youth vote this November. A new Alliance for Youth Action poll of Democrat and Democrat-leaning independents in swing states shows President Trump is far outpacing Joe Biden in targeted ads to young voters. According to the survey results, 47% of Generation Zers – those between age 18 and 25-years-old – have seen a pro-Trump or pro-GOP digital add recently compared to just 21% who have seen a pro-Democrat or pro-Biden ad. Biden is still struggling to secure loyalty from younger voters, many of whom admitted this spring that they wanted a replacement candidate for the Democratic ticket.

While the Alliance for Youth Action survey focuses exclusively on the views of Democrats and Democrat-leaning young people, they are a dwindling share of the youth vote. Market Research Foundation’s comprehensive 2018 survey of Generation Z found that the vast majority of young people are independents or uncommitted to either party, as shown below. 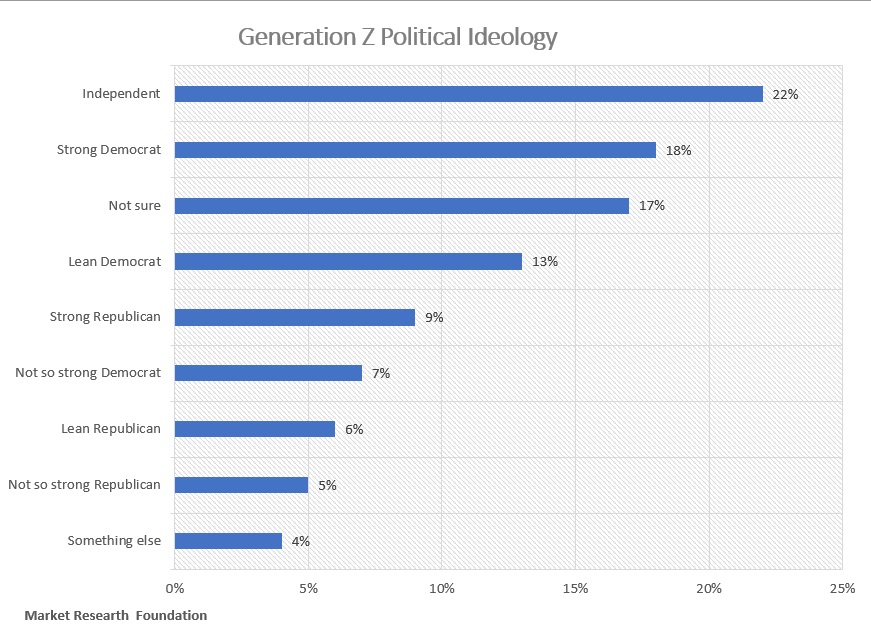 The Harvard Institute for Politics echoes MRF’s findings. Over 60% of young people under thirty who plan to vote in 2020 are not Democrats, according to spring 2020 Harvard Youth Poll of voters 18 to 29. The poll found a surprisingly small number of Generation Z and younger Millennials affiliate with either major party. A full 60% of young people say they belong to neither party, while less than a quarter (24%) say they are Democrats and 14% say they are Republicans.

Harvard Youth Poll data dating back to 2008 also shows the share of young people today who identify as moderate more than doubled from 19% in 2008 to 45% in 2019 while the share who identify as liberal fell from 46% to 27% over the same time period.

Still, the Alliance for Youth Action survey includes important considerations when refining messaging for young left-leaners. Young left-leaning Latinos and whites prioritize issues like the coronavirus, affordable healthcare, and democracy reform at almost identical rates, while ending racial discrimination is a top priority for a much larger proportion of young Blacks. Young Blacks and Latinos meanwhile, prioritize the economy at twice the rate of young whites, and young whites disproportionally prioritize the environment. 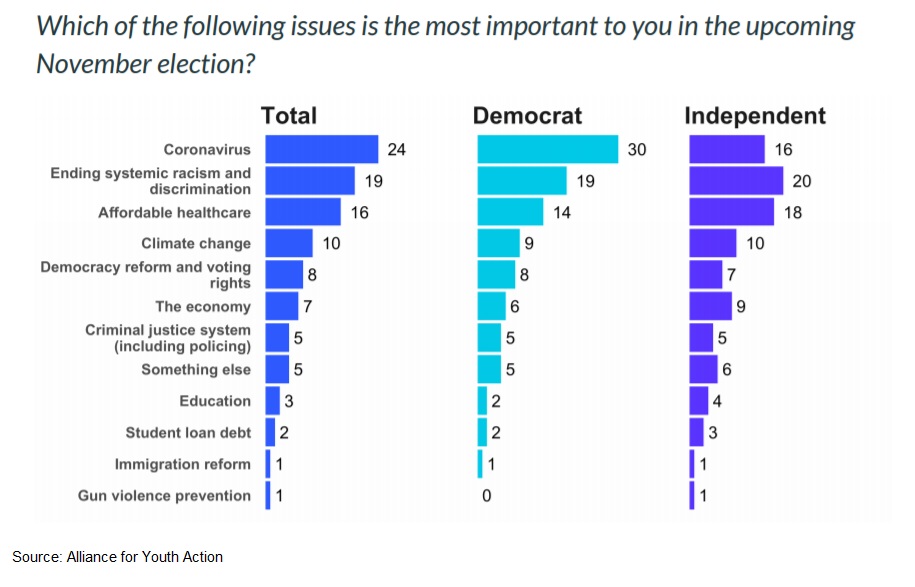 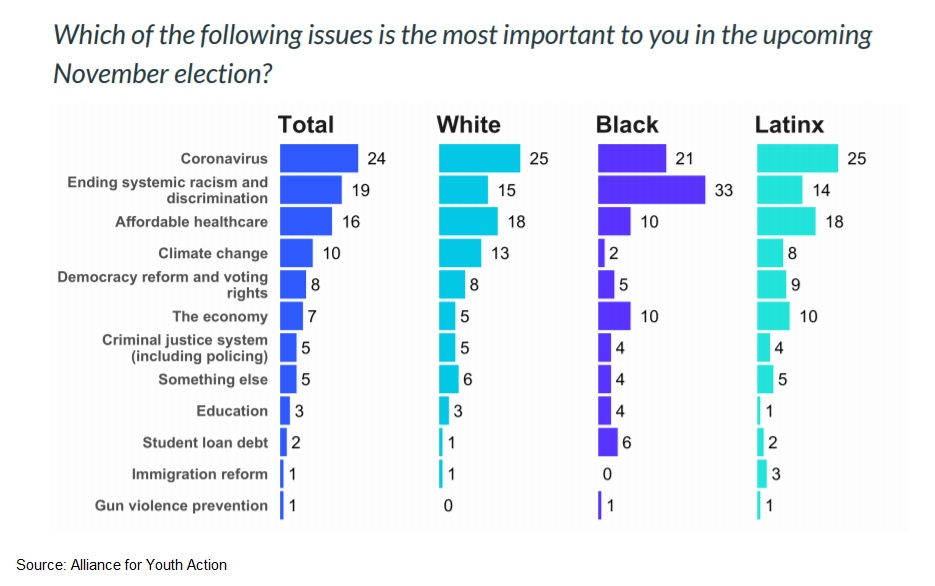 Despite the fact that the Alliance for Youth Action survey consisted exclusively of young Democrats and Democrat-leaners, Joe Biden only earned a net favorable rating from 59% of 18 to 25-year-olds, with 31% stating they held an unfavorable view of him and 11% stating they held a neutral view. Biden is still struggling monumentally with young people of color, especially young Blacks. Older Millennials in general hold a more favorable view of Biden than their younger counterparts, but this shift is most notable among Blacks under age 32, many of whom were children or young adults during Obama’s first term. Twenty-two percent of Blacks under age 32 have a very unfavorable view of Biden, compared to 16% of Hispanics and 11% of Whites in the same age group. This indicates that the former Vice President’s claim to fame – serving the first Black President of the United States – does little to earn the respect of young Blacks.

While high-turnout young Democrats and Democrat-leaners are most likely to favor Biden, 11% of those surveyed claim they would vote for someone other than Biden – 4% say they’d choose Trump, 3% would opt for a Green Party candidate, 1% would break for a Libertarian, and 3% aren’t sure. Among high turnout young Democrats and Democrat-leaners, that number drops to 5%. Among low turnout young voters, a full 20% say they would vote for someone other than Joe Biden, as shown below. 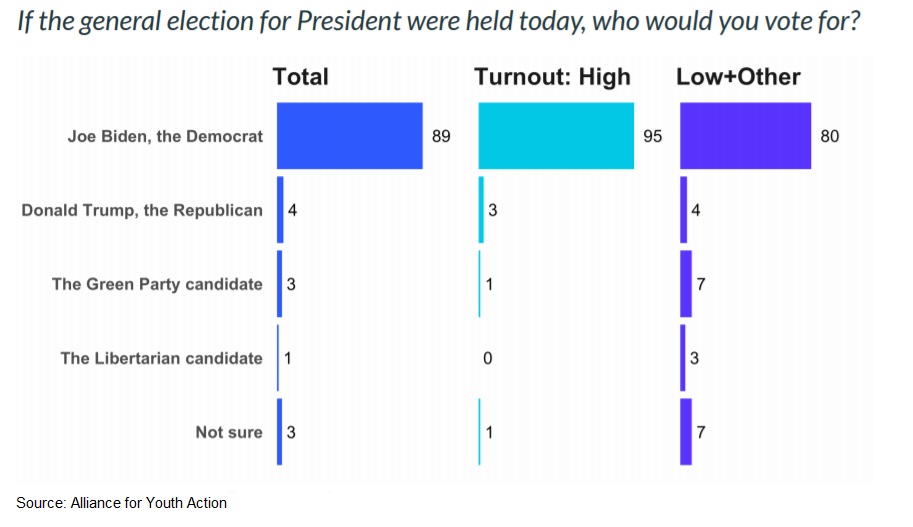 Republicans absolutely have an opportunity with young moderates and independents this November, but it is important to use the right message. Given the fact that the coronavirus is a top concern for young whites and Hispanics, and the economy is an outsized concern for young people of color compared to whites, conservatives should not cede ground to the left when addressing these issues. Hitting a group petrified by the virus and the economy with a canned message tested on older voters a year ago or attempting to ban the popular Generation Z dance app Tik Tok is unlikely to appeal to this group.

The bulk of the research available on Generation Z shows a cautious and moderate group that highly prioritizes economic and political stability, is skeptical of the mainstream media, and is open to an America First approach regardless of political party lean. Regionally, New England represents a strong opportunity for the Republican Party to make inroads with young voters.