As Market Research Foundation recently noted, the mainstream media is taking serious liberties with polling interpretation to spin a pro-Biden narrative. Last month, a slew of headlines trumpeted Biden’s double-digit lead, while failing to mention that long before the foreign coronavirus devastated entire sectors of the economy, Biden led Trump by a 13-point margin. If anything, the fact that Trump hasn’t ceded more ground over the past year speaks to his strength as a candidate. Biden’s favorable numbers have actually fallen since last year, and his unfavorable numbers have risen, coinciding with an uptick in third-party and independent voters.

As of early August, amidst economic uncertainty and daily standoffs between protesters and police across the country, President Trump is closing the gap with Biden. He is doing so by improving his standing with Independents, men, Black and Hispanic voters, and West Coasters. As shown below, Trump gained 4 points with Independents over the past two weeks, 3 points with men, and 2 points each with Black and Hispanic voters. 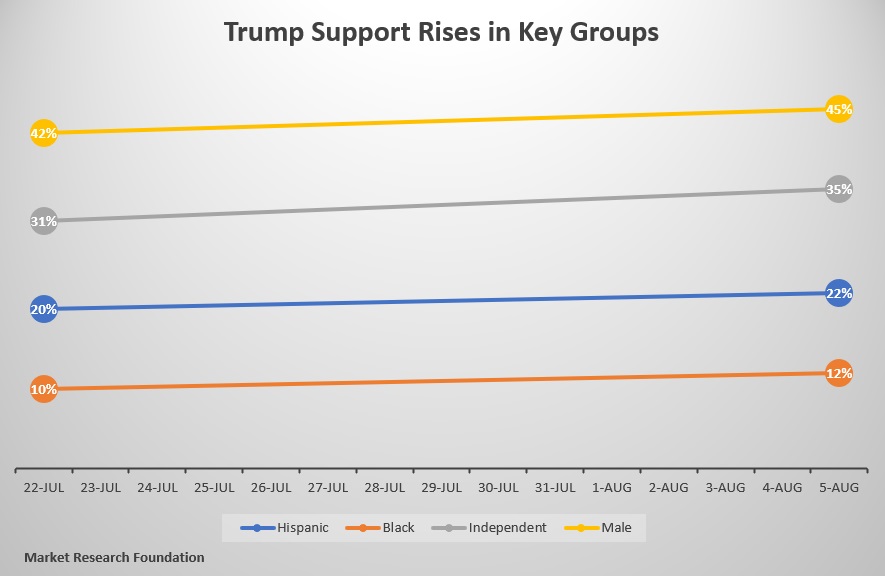 While the gains are modest, President Trump’s improvement with Black and Hispanic voters in particular has been incrementally moving upward since May. In June, Market Research Foundation noted that Trump’s approval rating climbed with both groups after the George Floyd riots prompted him to take a tougher stance on crime, as shown below. 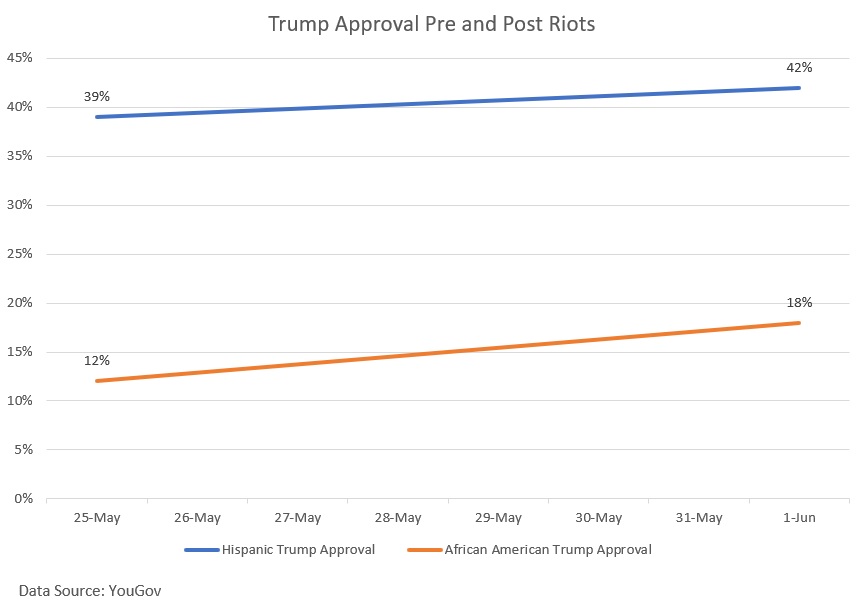 The President’s largest improvement comes from an unexpected source: West Coasters. The Hill-Harris X poll from July 22nd shows Trump at 32% with West Coasters, but that bumped up to 38% as of August 5th, as shown below. 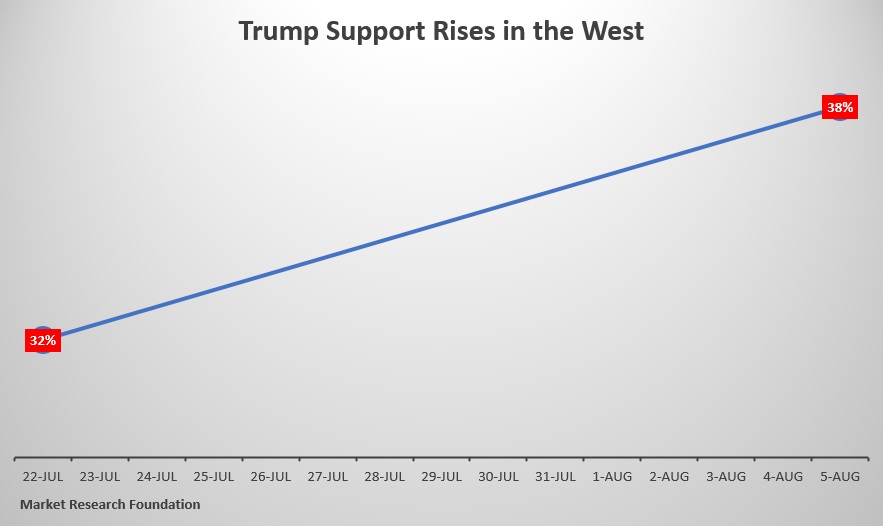 Trump still remains less popular on the West Coast than he does in the South, Midwest, and Northeast, but this incremental movement in his favor in the West has been building since May as well.

Market Research Foundation compiled YouGov polling showing Trump gained 4 points in the West from late May before the George Floyd riots escalated to early June after cities from Seattle to Oakland were devastated by violence. Since then, rioter standoffs and waves of crime and vandalism have continued to rock western cities, yet Biden has taken an anemic approach to solving the crime issues. Biden called the Portland riots “peaceful”, despite the fact that the city endured 52 consecutive nights of violence before federal officers were deployed there. Despite eruptions of violence in Seattle, Portland, Oakland, Los Angeles and elsewhere, Biden has yet to disavow the riots.

The mainstream media and left-leaning pollsters are doing their best to portray President Trump’s reelection prospects as doomed, but much of the available data shows Biden’s favorable numbers have actually dropped since last year. The President’s favorables have also dropped, in no small part due to a devastating health and economic crisis that has shut down much of the country and an antifa-led communist uprising. Beyond the headlines, President Trump’s tough-on-crime stance is helping him, specifically with minorities, independents, and West Coasters.