“What else do we know about this population, 18 through 24?”, Kamala asks her audience rhetorically in the clip. “They are stupid. That is why we put them in dormitories, and they have a resident assistant.” As the audience laughs, Kamala ads, “they make really bad decisions.”

The video is making the rounds this week, with Kamala fans stating they agree with her assessment, and critics pointing out that she might drive away a key constituency with her disparaging remarks. While we can only speculate on what exactly Kamala meant when she took aim at young voters, there is ample evidence that 18 to 24-year-old Americans are independent thinkers and critics of the mainstream culture. Most identify as independents and political moderates, many are questioning the conventional college career path and the mountain of debt it incurs, and a majority say their parents and their own ethics – not celebrities, politicians, or social media – influence their worldviews. Perhaps that’s why Kamala would rather insult them than consider their opinions.

Generation Z, currently defined as young people born after 1995, outnumber every other living age cohort in the nation at 26% of the population. They are a diverse group, and research points to their pragmatism and independent thought.

Gen Z is weighing the costs of college and debt carefully

A growing share of young people are critical of the costs of education, and many are opting out of college in favor of entrepreneurship, trade school, or entering the workforce. These college-ambivalent Generation Zers are more likely to be Republican or Independent, white, and male, and to hail from Central and Mountain states including Colorado, Idaho, Illinois, Iowa, Michigan, Montana, Wisconsin and Wyoming. They also share a high level of mistrust in the mainstream media, and negative views of the Democratic party.

Eighty-four percent of young people say it is possible to be successful and contribute to society in a meaningful way without getting a college degree, but 74% are worried about the social implications of opting out of college.

Market Research Foundation’s 2018 survey of Generation Z found that the vast majority of young people are independents or uncommitted to either party, as shown below. 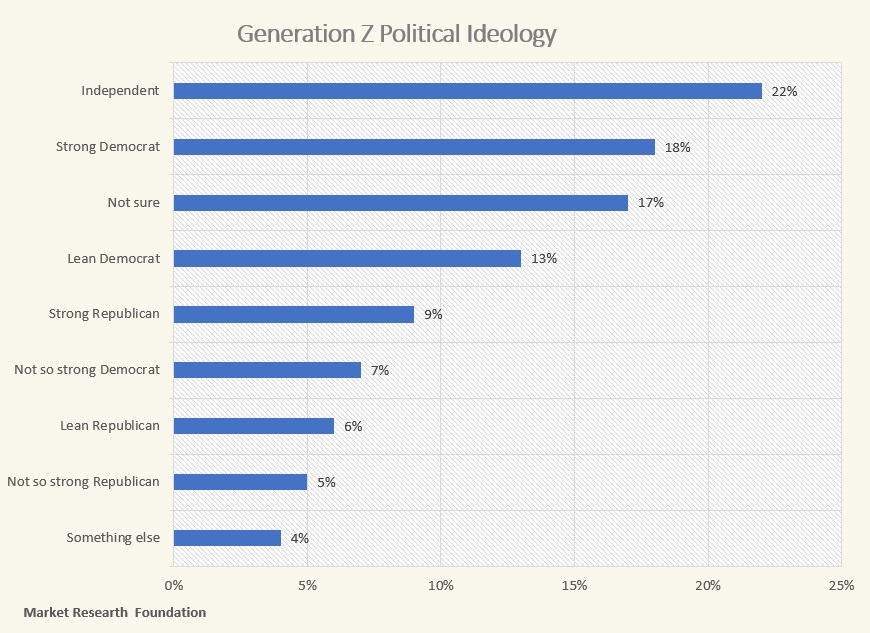 The Harvard Institute for Politics echoes MRF’s findings. Over 60% of young people under thirty who plan to vote in 2020 are not Democrats, according to the spring 2020 Harvard Youth Poll of voters 18 to 29. The poll found a surprisingly small number of Generation Z and younger Millennials affiliate with either major party. A full 60% of young people say they belong to neither party, while less than a quarter (24%) say they are Democrats and 14% say they are Republicans.

Unlike millennials who came of age in a time of celebrity obsession and watched social media become a dominant cultural force, much of Generation Z was online from an early age. Young Americans were saturated with digital content and a dizzying array of influences, and are turning away from the mainstream media and packaged cultural agendas.

Below is Generation Z’s ranking of the influences that shape their views. 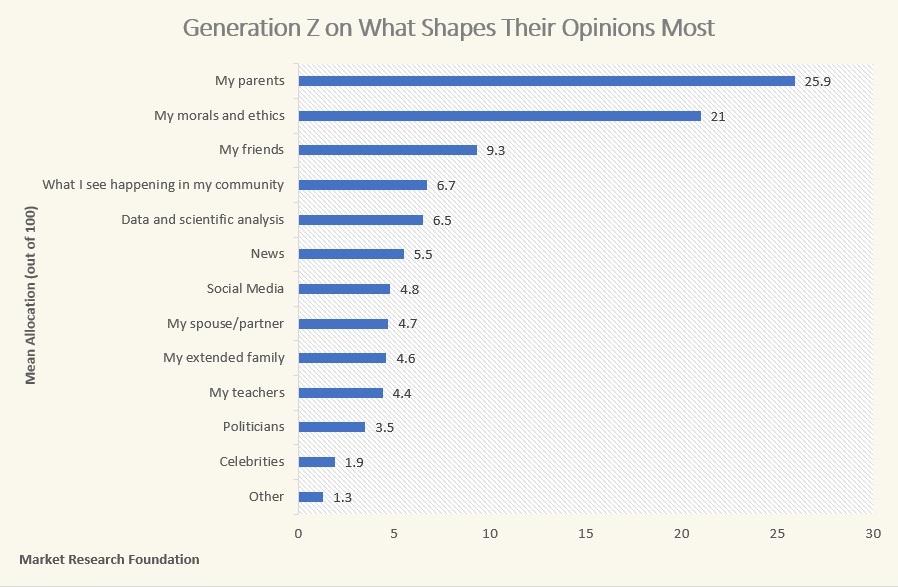 Senator Harris’ attack on young people shows a lack of willingness to engage and understand Generation Z. President Trump, for his part, has been fighting hard for the youth vote this year. A new Alliance for Youth Action poll of Democrat and Democrat-leaning independents in swing states shows President Trump is far outpacing Joe Biden in targeted ads to young voters. According to the survey results, 47% of Generation Zers – those between age 18 and 25-years-old – have seen a pro-Trump or pro-GOP digital add recently compared to just 21% who have seen a pro-Democrat or pro-Biden ad.

Biden is still struggling to secure loyalty from younger voters, many of whom admitted this spring that they wanted a replacement candidate for the Democratic ticket. Unfortunately for the Biden campaign, Kamala Harris is unlikely to help in this department.