Last week, Market Research Foundation analyzed the significant impact Non-college Whites could have this November if President Trump continues to add new voters to the rolls. An often-neglected segment when discussing low-propensity and non-college voters is young people: first time voters, college students, and disenchanted Millennials living at home with parents represent millions of potential voters – many of whom lean conservative and mistrust the Democrat Party.

According to the Pew Research Center, a record 26.6 million 18-to-29-year-olds are now living with their parents, the highest number since the Great Depression. While the coronavirus and ensuing economic downturn is no doubt contributing to this, the number of young adults living with parents has been crawling upward since the early 2000’s.

The share of young Whites forced to return home to live with their parents since March is growing significantly, and Pew estimates Whites accounted for about two-thirds (68%) of the increase in young adults living with their parents.

Prior to the 2016 Presidential election, Market Research Foundation and Norman Analytics and Research conducted two online focus groups among Millennial segments in Virginia, and found that many Millennials blame government for neglecting Americans, shipping jobs overseas, and wasting time and resources in foreign meddling. A sizable portion of Millennials living at home with their parents into adulthood are also much more likely to favor Trump.

MRF analysis also shows that young White men from Mountain and Central states are the most likely to say they intend to skip college in favor of another career path, and are much more skeptical of the mainstream media and the Democrat Party.

Regionally, young people from predominantly White mountain states including Colorado, Idaho, Montana, and Wyoming as well as Central states like Michigan, Ohio, and Wisconsin have the lowest desire to attend college, while those from South and Pacific regions have the highest desire. 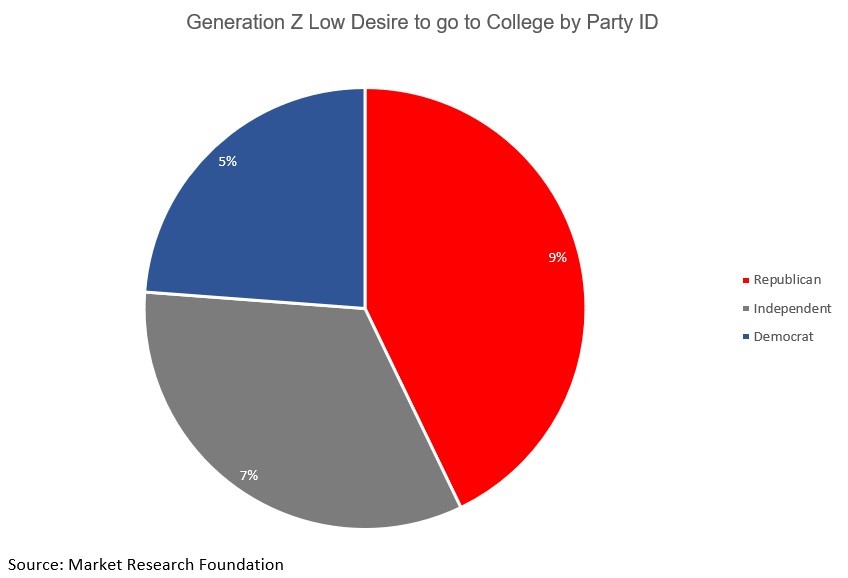 Younger Americans, particularly young Whites living at home with parents, and young college-avoidant White males from Mountain and Central states, represent millions of new potential first-time voters. These voters are not lost on the Trump campaign either. The Trump campaign has been blanketing young Americans with digital ads at twice the rate of the Biden campaign, and for good reason.