The latest Harvard Youth Poll shows the economy is now the first priority for voters 18 to 29, up from fifth place in March. The poll also found young Trump supporters are significantly more enthusiastic about their vote than young Biden supporters, and nearly all young voters disapprove of stealing, looting, and damage to public property as a form of protest.

This reordering of priorities, with the economy and law and order pushing to the forefront of young voters’ minds could detract from Biden’s support. Biden’s tepid response to the violent mobs this summer and lack of a coherent economic recovery plan are leaving young voters wary.

The economy is rising in importance as young Americans have been the hardest hit by the economic instability due to the lockdowns. Between February and May, 25% lost their jobs, and the number of young people who were neither employed nor in educational programs rose from 11% to 28% according to the Pew Research Center.

As Market Research Foundation pointed out this week, a record 26.6 million 18-to-29-year-olds are now living with their parents, the highest number since the Great Depression. The share of young Whites forced to return home to live with their parents since March is growing significantly, and the Pew Research Center estimates young Whites accounted for about two-thirds of the increase in young adults driven home to mom and dad due to the lockdowns.

Prior to the 2016 Presidential election, Market Research Foundation and Norman Analytics and Research conducted two online focus groups among Millennial segments in Virginia, and found that at that time many Millennials blamed government for shipping jobs overseas, and Millennials forced to bunk with mom and dad preferred Trump over Clinton 34% to 21%.

Sixty-three percent of Millennials agreed the government needs to take action to bring jobs back to the United States and 53% thought the government should fix problems for Americans instead of wasting time meddling in foreign countries – strong elements of President Trump’s “America First” approach to the economy and international relations.

The youth vote is far from locked in for Biden. The spring Harvard Youth Poll found that Biden’s unfavorable numbers outranked his favorable numbers among 85% of under thirties. Harvard broke the 18 to 29-year-old cohort into five new political categories – Engaged Progressives, Multicultural Moderates, the Center Left, MAGA Gen, and Disengaged. As shown below, the largest category of younger voters is Disengaged, and according to Harvard, this group leans right and rural and 41% approve of President Trump. 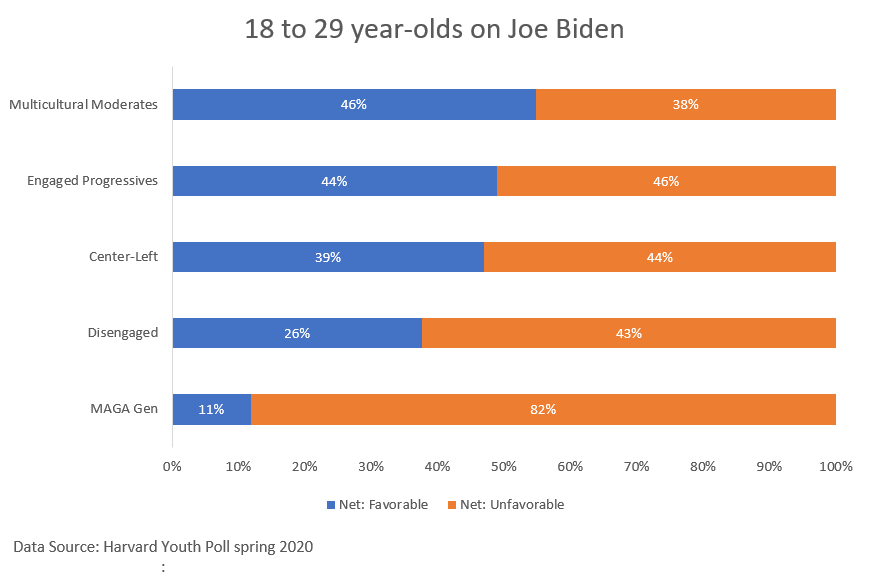 For his part, President Trump is aggressively pursuing the youth vote, including those who lean left. This August, an Alliance for Youth Action poll of Democrat and Democrat-leaning independents in swing states showed President Trump is far outpacing Joe Biden in targeted ads to young voters. The recent shift in young voter priorities could help President Trump make the case for law and order and an America-First approach to economic recovery.