While most mainstream media pundits unsurprisingly anointed Joe Biden the victor in the first Presidential debate on Tuesday, Hispanic viewers preferred President Trump according to a Telemundo poll. 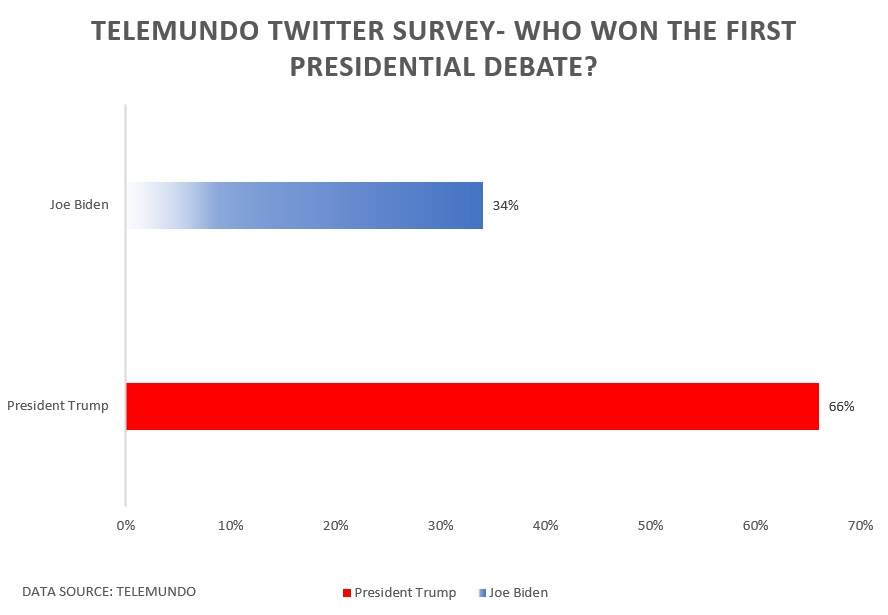 This finding comes on the heels of accelerating Hispanic support nationwide and in key states like Texas and Florida. While the poll was conducted on Twitter and was not a representative sample, a host of other polls confirm President Trump’s approval is on the rise with Latinos.

President Trump is polling at around 30% nationally with Latinos, and much higher in states like Texas and Florida.

In Florida, his prospects are even better. A September NBC News/Marist poll showed President Trump leading Biden 50% to 46% with Florida Latinos.

As Market Research Foundation pointed out in September, Biden’s support among Latinos is in freefall.

Hispanic enthusiasm for Democrats was already eroding nationwide in 2016, when Clinton underperformed Obama’s 2012 numbers with just 66% of the vote compared to Obama’s 71%.

Despite baseless rhetoric from the mainstream media portraying President Trump as anti-Hispanic, he won a slightly higher share than Mitt Romney in 2012 – 28% versus Romney’s 27%. Biden, meanwhile, is on track to perform worse than Clinton with Hispanics, and much worse than Obama. 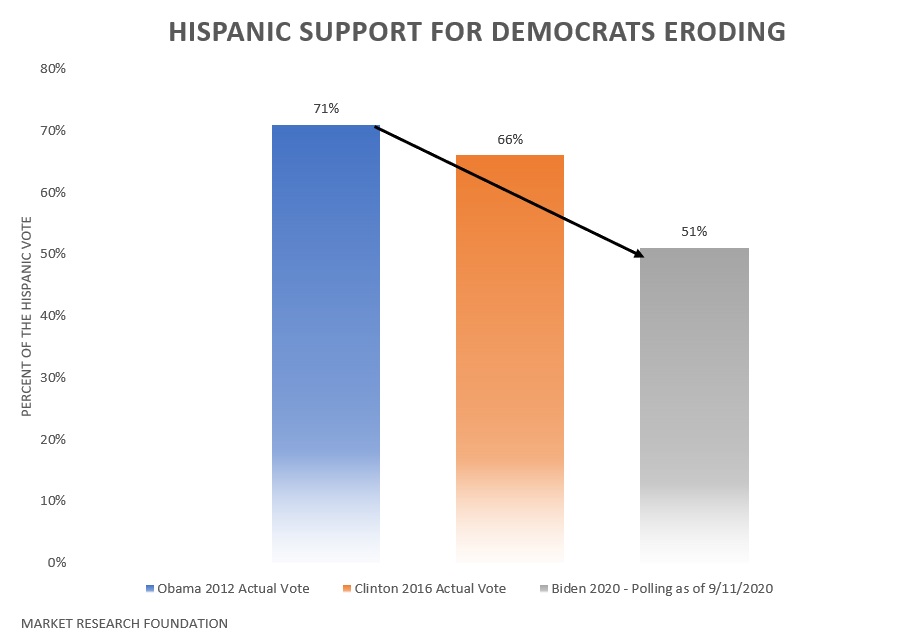 If Biden’s latest polling numbers reflect the share of the Latino vote he gets in November, he will have support 28% lower than that of Obama eight years ago.

Two key factors driving Latino support for Trump are the state of the economy, and concerns over the lawlessness running rampant in Democrat-controlled cities. Both topics were addressed in Tuesday’s debate. Latinos appear more persuaded by President Trump’s plans to prioritize the economy and enforce law and order than Biden’s ability to stand up to the leftwing of his own party.

In June, Market Research Foundation analyzed polling data on President Trump’s approval and found Trump gained support among both Black and Hispanic voters in the week after the riots and looting escalated.

A month later, Biden called the Portland riots “peaceful”, despite the fact that the city endured 52 consecutive nights of violence before federal officers were deployed there. He was also caught on tape endorsing defunding the police.

Speaking to far-left media outlet NowThis Biden said police have “become the enemy”, and endorsed slashing police budgets and diverting resources elsewhere. These statements play well with the far left, but are doing little to lift his numbers with Hispanics.

With two more presidential debates, one vice presidential debate, and just over a month between now and the election, nothing is certain. However, a strong body of polling indicates President Trump is on track to improve his margins with Latinos significantly. Biden meanwhile is on track to vastly underperform both Clinton and Obama’s numbers, and accelerate what appears to be a Latino exodus from the Democratic Party.