The Democrat Party hasn’t learned much from the election of President Trump. Rather than face the neglect millions of Americans suffered at the exploitative hands of globalism, the left dismisses half the country as delusional.

While Republicans are far from blameless in the offshoring of jobs and needless foreign occupations that accelerated in the last decade, it was the absurdity of punishing progressive globalism that half the county rebelled against four years ago.

Globalist progressives levied taxes and regulations on American businesses with impunity and planted American troops indefinitely overseas at great expense. They punished American citizens with the losing end of virtually all trade deals and immigration policies that undermined the rule of law all in the name of equaling out resources among a global population, that overall do not share the values and priorities of liberty and freedom.

Trumpism, characterized by an unapologetic America First approach to everything from immigration to trade and foreign occupations, is less about Trump himself, and more a rejection of exploitative policies. Americans have always valued freedom and self-determination, and Trump happened to be a lone no-nonsense voice in a sea of anti-American globalists and political cowards undermining the average citizen on all fronts.

No one can deny both parties are splintering and realigning in the age of Trumpian populism, with progressives aligning more hawkishly on defense. Last year’s Democratic primary debate in Ohio featured harsh criticism from Biden, Warren, and Buttigieg for President Trump’s call to withdraw troops from Syria. As it ended up, Democrats chose Joe Biden to represent the party, a man whose record in Washington is far from non-interventionalist. Biden voted for the Iraq war in 2008, and his lead foreign policy adviser is a former Obama advisor who urged for U.S. intervention in Libya.

Nowhere is this political realignment more evident than among the youngest Americans. Generation Z – defined as young people born after the mid-1990’s – are in their teens and early twenties and number approximately 24 million eligible voters.

Gen Z Americans are still forming their political identities, and the Republican and Democratic parties they are introduced to today are much different from those even four or eight years ago.

Politico recently led with the headline, ‘The rise of Gen Z could foretell the fall of Trumpism’ and then went on to reinforce the narrative that Gen Zers are a more leftwing version of Millennials. To be fair, Politico did admit Gen Zers aren’t exactly elated about Joe Biden, but what many in the mainstream are missing is that Gen Z’s hodgepodge of policy preferences are neither traditional Democrat nor stereotypical Republican.

Young Americans have adopted, if anything, a self-interested and rational form of ‘libertarian populism’. Their views are characterized by a rejection of globalism and foreign intervention, and a strong preference for independent thought and the freedom to make their own choices, tempered by the rule of law.

Market Research Foundation conducted a comprehensive survey of 1,500 young Americans in 2018, and found that while a majority of Gen Z is not particularly fond of Trump himself – just 30% approve of the President – Gen Z is widely supportive of America First policies, albeit through a more libertarian, insular lens.

A majority of Generation Z identifies as independent, and their views do not fit neatly into either party platform. Gen Z Republicans are as anti-war as Gen Z Democrats, and almost two-thirds of Gen Z Democrats support reducing foreign aid in favor of American needs.

To be sure, Gen Z aligns with their party’s positions to some degree on issues like immigration and the environment, but they are also fiercely anti-globalist, anti-foreign intervention, and pro America First. More often than not, Generation Z is actually more conservative, not less, than their slightly older Millennial counterparts.

Among New Englanders in particular, this sentiment is very strong. Fifty-seven percent of young New Englanders prefer people solving their own problems, the highest share by region to express this preference as shown below. This New England preference for less government intervention is indicative of the party realignment we are seeing nationally, and particularly in young people. 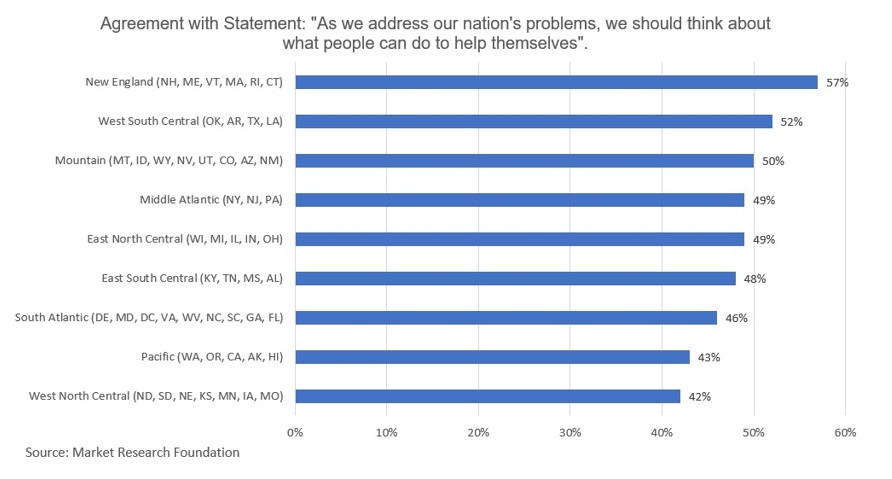 Market Research Foundation found that 85% of Republicans, 74% of Independents, and 65% of Democrats support an overtly America First policy agenda.

On the issue of foreign aid, 82% of Republicans, 73% of Independents, and 66% of Democrats would like to see a reduction in foreign aid in favor of spending on U.S. based programs.

Across the board, Gen Zers reject open borders and lawlessness when it comes to immigration policy. Eighty-one percent of Generation Zers say immigrants must follow the rules to become citizens even if they are difficult and 58% of Generation Zers say it doesn’t matter if illegal immigrants cause problems; if they came here illegally, they need to leave or go through the proper procedures to stay.

One issue Politico gets right is that a majority of young people do prioritize the environment. Eighty-percent of Gen Zers favor environmental policies – though support drops to 63% when increased utility costs are mentioned, specifically among lower income households.

Fifty-five percent of Republicans, 82% of Independents, and 91% of Democrats support environmental policies.

Public Religion Research Institute, a nonprofit, nonpartisan research group, conducted a comprehensive analysis into 15-24 olds in 2018, and found that Trump is viewed favorably by more than 4 in 10 young white men.

The researchers also found young women are about twice as likely as men to prioritize the issue of LGBT rights: 36% of young women say it is a critical issue, compared to 19% of young men.

Broadly, both the Democrat and Republican parties are rapidly shifting and realigning, with modern Republicans rejecting the hawkish globalist policies of the early 2000’s in favor of inward-focused populism. Democrats, almost in response to Trump’s America First rallying cry, are becoming increasingly more hawkish and globally fixated.

Young people are emerging onto a new political landscape, and redefining what it means to be Republican or Democrat.

Overall, young people prefer an inwardly-focused set of policy goals, and vehemently reject foreign intervention and the undermining of American citizens. Whether this preference takes the shape of libertarianism, populism, or something entirely different is yet to be determined.

Like all up-and-coming generations, Generation Z has its unique view of the world shaped by the events leading up to their coming of age. And like generations past, they will shape political parties and institutions as they grow into them – not the other way around.

To some extent, it appears this generation will adopt some progressive polices of today’s Democrats.  But they also show signs of other political ideas and affiliations that run completely counter to the modern Democratic party.

The question to ask is not whether Generation Z will become Democrats or Republicans, but which party or movement will adapt the fastest to become the most appealing to the youngest generation of voters.