Last week, Market Research Foundation shared our findings on Generation Z’s populist identity and bipartisan support for America First approaches to immigration, foreign policy, and foreign aid. However, there is one issue that seems almost universally important to young Americans where the left holds the theoretical moral advantage: environmental policy.

It is indisputable that young people fervently prioritize the environment – eighty-percent of Gen Z favors environmental policies. By party, 91% of Democrats, 82% of Independents, and 55% of Republicans support broad legislation to protect the environment as shown below. 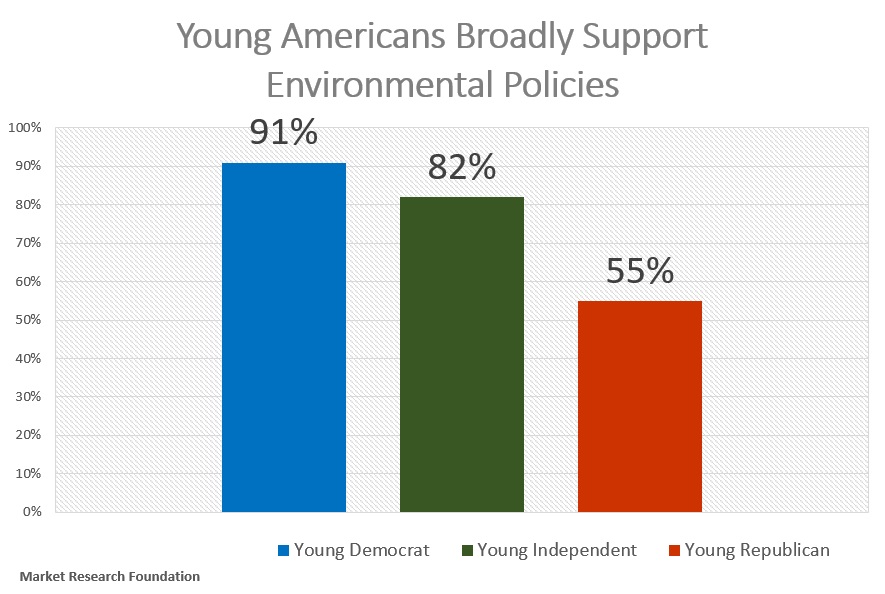 The Republican Party has earned a reputation of opposing environmental policies in favor of economic growth, a stance that has merit given the overreaching nature of most proposals, but can appear short-sighted to young Americans. To Gen Zers in their teens and early twenties ensuring the United States adopts long-lasting sustainable energy solutions over the next 60 to 70 years is an understandable priority.

The conventional line from the left is that the GOP will be forced to ‘adapt’ and adopt progressive views on climate change in order to remain relevant with rigidly environmentalist young people.

Without a consistent explanation from conservatives beyond the broad concern for the economy, it’s not surprising young people often find themselves siding with the left on environmental issues.

Young conservatives, particularly Evangelicals, are increasingly insistent on prioritizing the environment. Kyle Meyaard-Schaap, a national spokesperson for Young Evangelicals for Climate Action recently pointed out that many young conservatives are avoiding the Republican label because they believe the GOP has an inadequate response to environmental issues.

Unfortunately, much of the climate change legislation pushed by the left is less about protecting the environment, and more about punishing the United States and enforcing global wealth redistribution.

The Paris Climate Accord President Trump withdrew the U.S. from in 2017 is an egregious example of anti-American redistributionist policies disguised as international cooperation. In his statement on withdrawal, President Trump stated, “the Paris Accord is very unfair, at the highest level, to the United States.”

He was right. The agreement, entered into by the Obama-Biden administration in 2015, allowed China to continue increasing emissions for over a decade even as the U.S. would be forced to make drastic reductions. Worse, India’s participation was contingent on receiving billions in foreign aid from Western nations. What it amounted to was a redistributionist’s dream, crippling Western nations and funneling billions to so-called ‘developing’ nations under the guise of saving the planet.

Then there is Joe Biden’s “plan for a clean energy revolution and environmental justice” a punishing array of policies borrowed from the Green New Deal that unsurprisingly weave social justice into environmental policy. For example, the Green New Deal just happens to include a mandatory “living wage”, universal healthcare, and government-provided affordable housing, all apparently necessary aspects of combating climate change.

The same far-left progressives constantly apologizing for the United States and pushing through trade deals and immigration policies that put America last are the loudest voices screeching for environmental change. And that is worrisome. Environmental policy is not the issue. It is the globalist, anti-American, wealth redistributionist solutions the far-left comes to the table with.

This distinction is extremely important when conducting research into the opinions of younger Americans, many of whom are still forming their opinions about public policy.

What must be communicated better by those on the right, is empathy for the concern young people have for the environment. Then, conservatives must provide a concrete explanation of how most globalist climate agreements and domestic green initiatives undermine American prosperity and actually do very little to improve the quality of the environment we live in.

On the issue of foreign aid, 82% of Republicans, 73% of Independents, and 66% of Democrats would like to see a reduction in foreign spending in favor of spending on U.S. based programs.

These stances are all indicative of a self-interested form of ‘libertarian populism’, hardly the type of group to embrace a global wealth redistribution agenda if they knew the details.

Instead of staying mostly quiet on environmental issues, the GOP needs to bring policy ideas to the table and tout its own solutions, especially when messaging to younger Americans.

During his first four years, President Trump committed $38 billion to clean water infrastructure for Americans, signed the Great American Outdoors Act, replaced NAFTA with the even-stronger USMCA, secured 1.3 million additional acres of protected wilderness, and signed the Save Our Seas Act to protect American shores from foreign litter. If the United States is to consider working with other nations toward a cleaner environment, we must do so without forcing Americans to bear the bulk of the costs. These are the sorts of environmental solutions that improve quality of life for all Americans, unlike the unjust international agreements and costly Green New Deal.

If conservatives can make the case for an America First approach to environmental policy that strikes the right balance between economic needs and the environment, the GOP has a much better opportunity to build a lasting relationship with young Americans.

January 24, 2022
“The research portrays in no uncertain terms a nation in a state of deep cynicism and fear about losing their country, characteristics which coincidentally preceded Trump’s ‘surprise’ victory in 2016.” Last November, a sixty-page research survey of over 2,500 Americans was quietly released by a DC think tank. It portrays...

January 11, 2022
“Biden and big government bureaucrats at the federal level are attempting to do away with gig work, but it could cost them with minorities, young people, and urbanites.” We are barely into the second week of the new year, and it is already clear the gig economy is under assault...

January 5, 2022
Evidence of a marked Asian shift away from the Democratic Party is beginning to emerge at the same time as Asians substantially increase their voter participation. With the right approach, Republicans have a sizeable opportunity to build inroads with Asian voters, particularly Cambodian, Vietnamese, and Korean Americans who show...

December 20, 2021
“The lengths to which Democrats had to go to maintain power in Philly reveal a party desperate to keep control, but they are barely holding on.” Pennsylvania was by far one of the most contentious battleground states in the 2020 election, but new analysis shows even in Philadelphia Democrats are...

December 10, 2021
“New data from the Harvard Youth Poll shows the vast majority of young people have little interest in increasing America’s role in ‘global politics’, and instead prioritize a slate of domestic issues.” The latest Harvard Youth Poll has some sobering numbers for neoconservatives who have used an American exceptionalism argument...

November 30, 2021
“Contrary to what pundits have been saying, Youngkin did not “save” the GOP from Trump, but Trump set in motion significant shifts toward the Republican Party, and Youngkin was able to build off them.” Republican newcomer Glenn Youngkin’s victory in the November 2nd Governor’s race can be largely attributed to...

November 16, 2021
Market Research Foundation’s analysis of the 2021 Virginia gubernatorial election in Fairfax County demonstrates lower-income and minority voters played a pivotal role in the precincts which shifted away from the Democrat candidate between 2017 and 2021. Precincts which became significantly less Democrat have higher Hispanic and Asian populations, and an...

Virginia Governor’s Race has Important Implications for the Midterms

November 9, 2021
“You can make the argument that with a campaign plan of linking Youngkin to Trump, McAuliffe shot himself.” – Bill Wilson, MRF Chairman Tuesday’s victory for Glenn Youngkin in the Virginia Governor’s race is offering Republicans a playbook for the midterms in swing states: run a political outsider candidate with a...