The presidential election was thrust into chaos last Tuesday night after the mainstream media refused to call four delegate-rich states – Pennsylvania, Nevada, Michigan and Georgia – for either President Trump or Joe Biden. Add to that Fox News prematurely calling Arizona for Biden, numerous accounts of ‘voter irregularities’, and President Trump’s promise to get to the bottom of what appears to be an incredibly messy vote-by-mail fiasco, and the election is still up in the air.

Now, Biden has declared himself the victor, and the Democrats and mainstream media are ignoring a multitude of allegations of voter fraud. President Trump is pressing forward with lawsuits in multiple states and demanding all legal ballots be counted while weeding out fraudulent ones, and the nation is watching.

Despite the uncertainty that has shaped the last four days, Tuesday night delivered undeniable victories for the GOP that will shape the future of the conservative movement in a very promising way.

Not only did Republicans defy the dominant mainstream predictions for the House of Representatives and win almost every tossup on the map, they added at least six seats based on called races, and made historic gains with Latinos, Black Americans, and added young voters.

Tuesday’s election proves beyond a shadow of a doubt that Latinos are far from a nail in the coffin for the GOP. Instead, Trump made historic gains with Latino men and women alike that helped propel him to victory in hard-fought states like Texas and Florida, and possibly several others.

The President’s decisive victory in Florida was one of the best examples of the mass Latino realignment in his favor. Trump swept Florida 51.2% to Biden’s 47.8%, amassing the Sunshine State’s 29 electoral votes.

Latino voters played a pivotal role in Trump’s victory, with the President amassing 55% of Cubans, 30% of Puerto Ricans and 48% of other Latino voters according to NBC News exit polls.

Biden barely collected half of the Latino vote in Florida, down from Clinton’s 62% in 2016. This resulted in President Trump winning 3 of 10 nonwhite Florida voters last night compared to 2 of 10 in 2016 according to Reuters.

Trump also massively improved on his own 2016 numbers by nearly 14 points in Miami-Dade County where Cubans make up over 25% of the electorate.

In Texas, President Trump defeated Biden 52.3% to 46.2%, and ate aggressively into Democrat margins in Latino-heavy counties. Four in 10 Latinos voted for the President in Texas Tuesday, up from 3 in 10 in 2016, according to Reuters.

Starr County Texas, which clocks in at 96% Latino, making it the most Latino county in the United States, saw a massive realignment toward the GOP last night. Clinton won Starr county 79% to Trump’s 17% in 2016, but Biden almost lost it, barely eking out a victory of 52% to Trump’s 47% according to Fox News.

Not to be diminished, President Trump also made substantial gains with Blacks as Market Research Foundation noted he could. Trump netted 12% of Black Americans nationwide, up from 8% four years ago. His most substantial gain was among Black men, 18% of whom supported Trump up from 13% four years ago. Though his share of the Black female vote was small, it doubled from 4% in 2016 to 8% in 2020.

President Trump’s refusal to cede younger Americans to the left and relentless pursuit of the youth which Market Research Foundation has extensively covered – paid off. 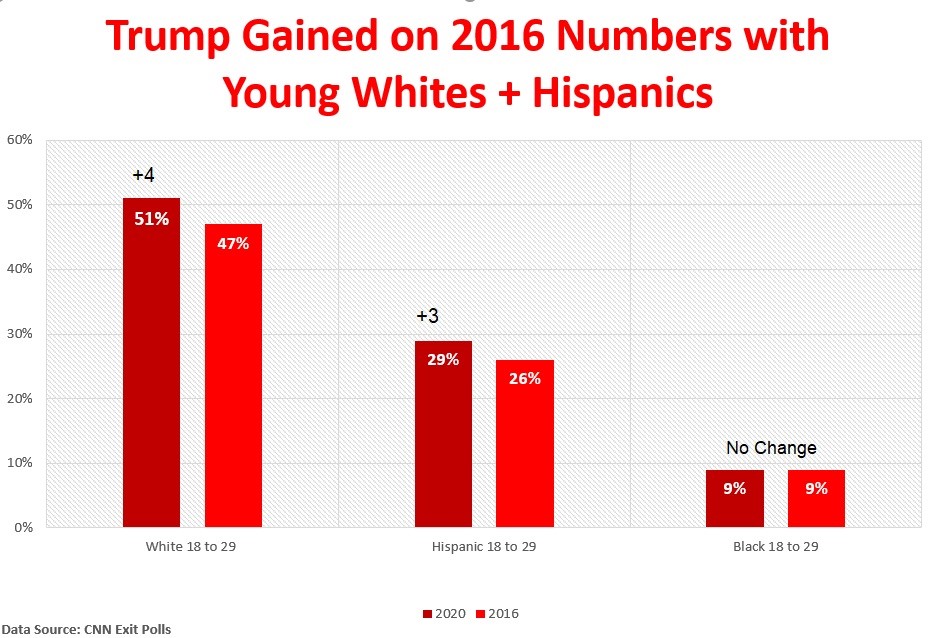 Latinos and Blacks are increasingly driven by economic and public safety concerns, and Biden and the Democrats’ failure to quell violence and reopen the economy drove them toward the GOP, as Market Research Foundation has been predicting for months.  Young Americans for their part are becoming more ‘economic’ voters in the wake of the coronavirus, with a pre-election survey by College Finance showing Trump was overall most trusted when it came to specific economic policies.

With a message of law and order, a commitment to reopening the economy, and a stand against socialism, President Trump proved last night that the Republican Party can earn a sizable portion of the Latino vote, substantially raise its numbers with Black Americans, and even increase its youth vote and minority youth vote numbers.