It’s been a week since President Trump’s reelection prospects were significantly diminished due in large part to apparent multi-state technical ‘glitches’ that miraculously seem to favor Democrats exclusively. The prospect of a Biden-Harris presidency is something Americans must prepare for.

If President Trump is unable to gain legal grounds for a recount, conservatives will have their work cut out for them. Beyond the inevitable higher taxes, a return to crippling trade deals, amnesty for millions of illegal immigrants, a reentry into disastrous global agreements like the Paris Accord, and a socialist overhaul of healthcare, a Trump defeat would almost certainly usher in an abrupt return to costly, deadly, neoconservative foreign policy.

A resurgence of hawkish neocon foreign policy is not only undeniably devastating to American families and the world, it is the perfect way to drive young Americans decidedly away from the Republican Party.

As Market Research Foundation recently noted, under Trump the Democrat and Republican parties have been splintering and realigning, with progressives embracing a more hawkish foreign policy in reaction to Trump’s less interventionist one.

Nowhere is this political realignment more evident than among the youngest Americans. Generation Z – defined as young people born after the mid-1990’s – are in their teens and early twenties and number approximately 24 million eligible voters.

Notably, President Trump appears to have gained the most among a narrow age niche: he increased his share of young people between age 25 and 29 from 38% four years ago to 43% this year. Young people in this age group bridge the Millennial and Generation Z cohorts, and appear to have shifted fairly significantly toward the President. More analysis is warranted into this bridge generation.

President Trump was on his way to recouping a portion of the youth vote and building a strong coalition of young people dedicated to America First principles.

Eight-five percent of Republicans, 74% of Independents, and 65% of Democrats support an overtly America First policy agenda.

On the issue of foreign aid, 82% of Republicans, 73% of Independents, and 66% of Democrats would like to see a reduction in foreign aid in favor of spending on U.S. based programs.

On the issue of foreign intervention, young Americans reject both neoconservative Republicanism and progressive ‘humanitarian’ intervention, with some nuances.

Seventy percent of young people agree U.S. involvement in other nations often results in chaos for Americans and other nations. There is broad support for non-interventionalist policies across political groups.

In fact, 68% of young Republicans, an equal share of young Democrats (68%) and 71% of young Independents agree the U.S.  should stay out of international conflicts and only become involved when we are forced to. Notably, less than half of young people say they could support a candidate who supports foreign war efforts.

Below is a summary of Generation Z’s views on a series of foreign policy statements. 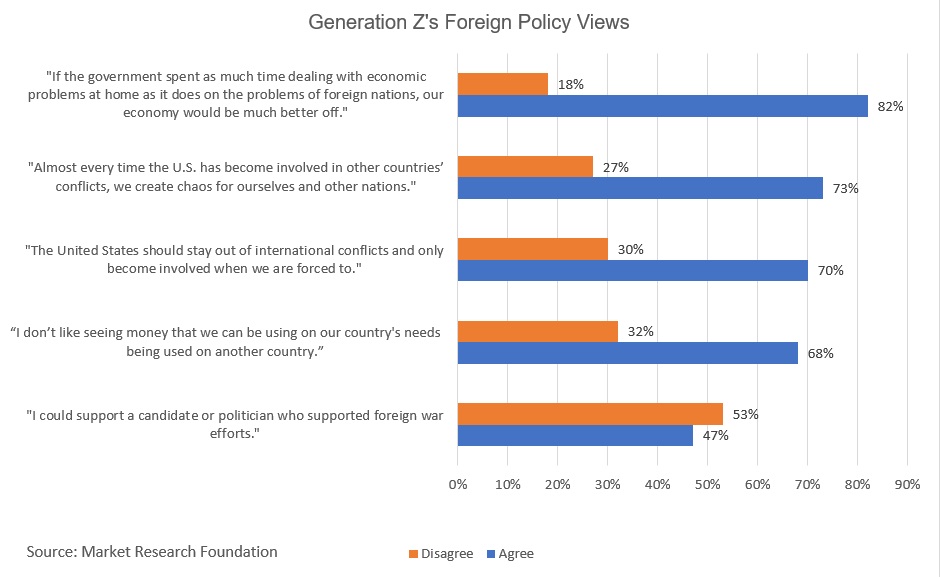 The language and political framing of foreign policy questions has a significant impact on responses. For example, while 73% of young people agree that almost every time the U.S. becomes involved in other countries’ conflicts, we create chaos, that position is somewhat contradicted when a humanitarian ‘duty’ to other nations is brought up. Sixty-two percent of young people think the U.S. has a duty to help other nations keep peace and fight off aggressors.

However, there are significant regional differences of opinion on whether America’s ‘duty’ to other nations justifies foreign involvement. Support for the humanitarian justification is lowest among young people from New England, specifically New Hampshire, Maine, Vermont, Massachusetts, Connecticut, and Rhode Island, at just 53%. Support for the humanitarian justification is highest among young people from East South Central states, specifically Kentucky, Tennessee, Mississippi, and Alabama, at 73%.

Below is a graph showing regional support for the humanitarian justification for foreign meddling. 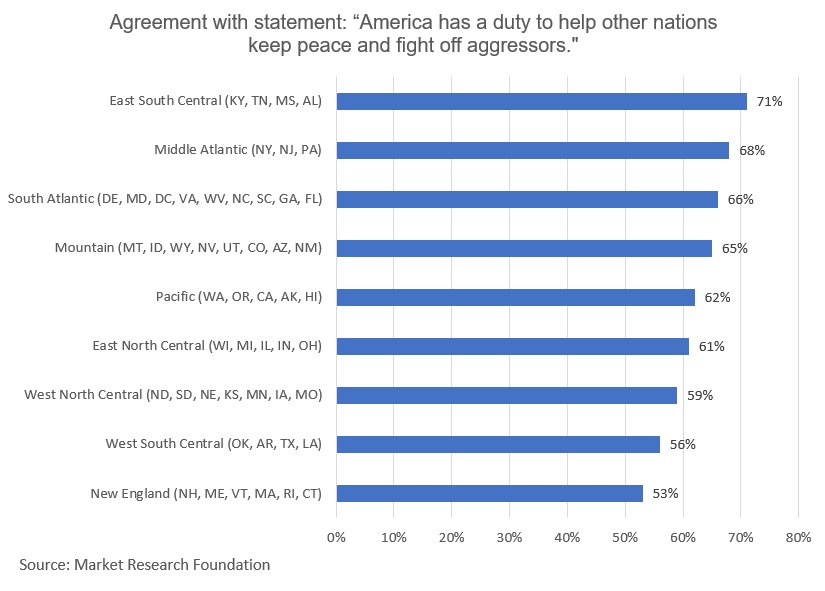 The consistently anti-foreign meddling young American is not necessarily more likely to be liberal or conservative. By party identification, a larger share of young Republicans reject the humanitarian justification when compared to young Democrats, but young Independents reject it at the highest rate. Forty percent of Independents disagree with the humanitarian justification statement, versus 37% of Republicans and 34% of Democrats.

Beyond regional, racial, and party identification deviations, young people from the lowest income families are the least likely to support a humanitarian justification for foreign involvement. Forty-four percent of Generation Z members from households with an income below $25,000 disagree with the humanitarian justification, versus 27% of those from households with income greater than $200,000.

Under Trump, neocons squawked and squabbled over his commitment to scale down troop deployments around the world, broker peace with unlikely allies, and avoid unnecessary foreign conflict, but they have been itching for a war.

Since Tuesday’s election appears to have seriously jeopardized Trump’s reelection, war-hungry neocons are coming out of the woodwork. Just this weekend, the Heritage Foundation shared an article titled, “The Myth of Endless Wars”, in which Dakota Wood informs critics of an aggressive foreign policy agenda of their alleged ignorance. The terms “endless wars” and “forever wars”, colloquialisms inserted into the national dialogue by President Trump, are nothing more than “intellectual laziness” writes Wood. He asserts, “the United States has dispatched military forces to deal with numerous situations for which diplomatic solutions were not possible.”

The talking points reek of a propagandized attempt to denounce Trump-style noninterventionism before the last votes have even been counted. Notably a slew of conservatives on Twitter appear to have seen through it. A string of commentators called out Wood and the Heritage Foundation, calling the assertions “madness” and pointing out that the neocons couldn’t wait to reassert themselves, as shown below. 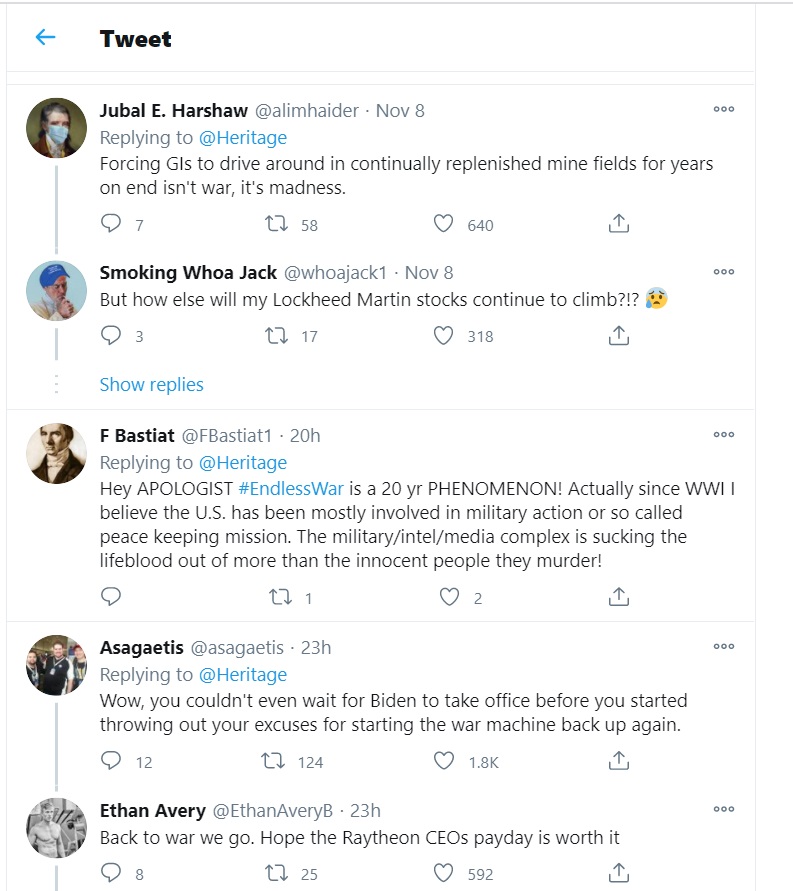 Market Research Foundation’s analysis shows that young Americans across the political spectrum are one of the largest coalitions ready to embrace a non-interventionist, America First approach to foreign policy. In the absence of President Trump, it is likely that neocons will continue to emerge, and attempt to rapidly return the Republican Party to neocon globalist policies. Biden, who has an interventionist track record of his own, and appears barely fit to govern, will either allow or encourage the shift.

However, the desire for peace is a powerful motivator that should never be underestimated. Conservatives have an opportunity to continue making inroads with younger Americans if we can demonstrate that we are standing against warmongers on both sides of the aisle.