All eyes are on Georgia as the January 5th Senate runoff that will decide which party controls the U.S. Senate rapidly approaches. Democrats are hanging their hopes on securing both seats in the runoff – and a majority in the upper chamber – but both Democrat candidates secured less votes than their Republican opponents in the November 2020 election.

Market Research Foundation analyzed CNN Exit Polls from the November 3rd election to determine where each candidate did best, and identify segments that may be receptive to turning out in the special election. 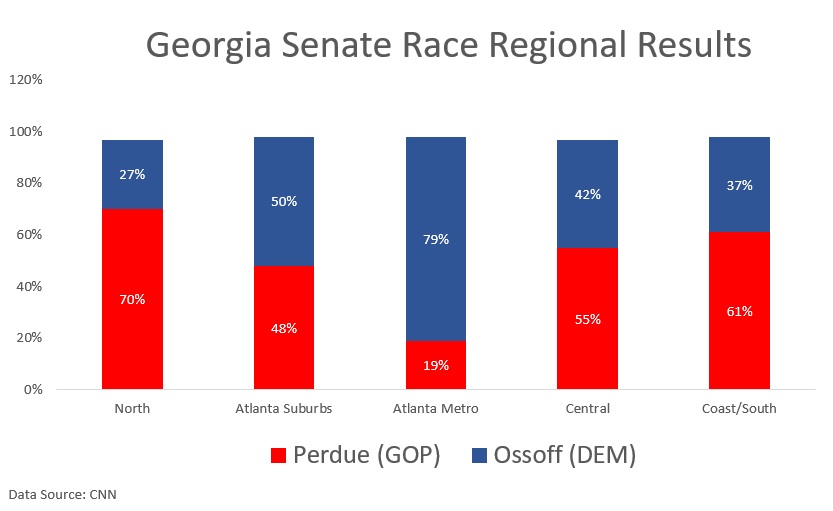 Age-wise, Perdue won a majority of voters forty-five and older, while Ossoff won a majority of those under forty-five. Notably, Perdue performed substantially better against Ossoff with Georgia’s youngest voters – age eighteen to twenty-four – than he did with all other age groups under forty. Perdue won 47% of eighteen to twenty-four-year-olds, 37% of twenty-five to twenty-nine-year-olds, and 42% of thirty to thirty-nine-year-olds. Young voters who may not have turned out in the November 3rd election represent an opportunity for the GOP.

This penchant for very young voters to break for a Republican candidate at substantially higher margins than those slightly older is something Market Research Foundation noted in the 2018 midterms in several states, including Georgia. Voters under twenty-six comprise Generation Z, a distinct age cohort that often votes differently than Millennials. In the 2018 midterms, Democrats had significant difficulty securing very young voters in the Georgia Governor race when compared to voters just a few years older. Republican Brian Kemp secured a victory over Democrat Stacey Abrams, with the help of 40% of Georgia’s eighteen to twenty-four-year-olds. This was the largest share of voters to break for the Republican within any age group under 40.

Perdue won a majority of White voters with 69% of the vote, but he underperformed compared to his 2014 senate bid, when he won 74% of white voters. This year, Perdue won 71% of white men, and 67% of white women. Perdue also won a significant share of Black men, earning 17% of their vote, and he earned 8% of the Black female vote. Perdue performed better with Latinos than President Trump, winning 43% of the vote to Trump’s 37%. Among Latino men, Perdue won 45% of the vote, and among Latino women, he won 42%.

Warnock performed well among younger voters compared to Republican Loeffler, but a significant share of under thirties broke for the other Democrat on the ballot, Matt Lieberman. Fifteen percent of eighteen to twenty-nine-year-olds favored Lieberman over frontrunner Warnock, compared to 11% of thirty to forty-four-year-olds, 8% of forty-five to sixty-four-year-olds, and 4% of over 65-year-olds. Without Lieberman as an option, it is possible a portion of this segment will sit out the special election.

Loeffler, like Perdue, won a larger share of Georgia’s youngest voters compared to those slightly older. Loeffler earned 25% of eighteen to twenty-four-year-olds, and 18% of twenty-five to twenty-nine-year-olds. However, among voters under forty, Loeffler performed best with those thirty to thirty-nine, winning 30% of the vote. She also won 32% of 40 to 64-year-olds and 30% of those 65 and over.

In her race, Loeffler won the larger share of support from white voters (42%), compared to the other Republican on the ballot, Congressman Doug Collins. Loeffler won 42% of white men and 41% of women, while 30% of white men and 26% of white women broke for Collins. Loeffler, unlike Perdue, did not do nearly as well with Black men, earning just 7% of their vote, while 9% of Black men preferred Collins instead. Just 5% of Black women supported Loeffler, and 4% supported Collins. Twenty-seven percent of Latino men and 16% of Latino women supported Loeffler.