The latest polls show the contentious battle for two Georgia Senate seats – and control of the United States Senate – will be close. Five Thirty Eight has Republican David Perdue close to a tie with Democrat Jon Ossoff, and gives Democrat Raphael Warnock a small lead over Republican Kelly Loeffler. However, analysts are quick to note that the same polling errors that plagued the 2020 Presidential Election and underestimated Trump support, could be skewing the numbers in Democrats’ favor.

As Market Research Foundation noted last week, Democrats have an uphill battle to make up for losses in Georgia. GOP Senator David Perdue won 49.7% of the vote on November 3rd to Democrat challenger Ossoff’s 47.9%. In the special election to fill Senator Johnny Isakson’s seat, GOP Senator Kelly Loeffler split her share of the vote with fellow GOP candidate Doug Collins, and the two of them won a combined 45% of the vote to Democrat challenger Raphael Warnock’s 32.9%.

A comprehensive poll of over 1,600 Georgia voters taken for Democratic candidate for the Senate Matt Lieberman reveals deep partisan splits on issues such as addressing reopening the economy, views on the federal government, and views on police and police funding as well as race issues.

Georgia Democrats and Independents are Souring on the Federal Government

The group most likely to say the government has gone too far is Black men, a full 19% of whom express this sentiment, almost twice the rate of Georgia voters overall.  What’s more, 20% of Black men say they trust the GOP more on handling the coronavirus. 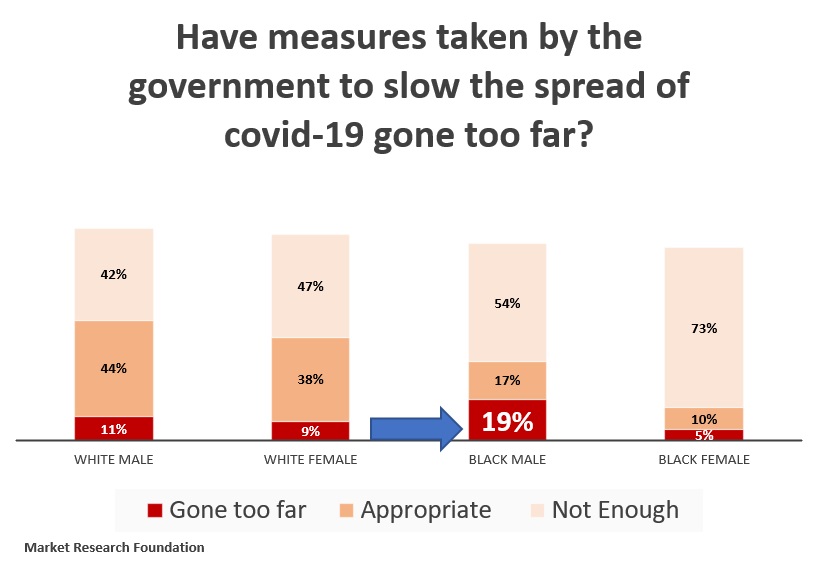 Police are largely viewed favorably including among Black and Hispanic voters

The ‘defund the police’ rallying cry the radical Left has allowed to take hold of the Democratic Party continues to divide voters.

Overall, the police are well liked in Georgia, with 66% of voters overall expressing a favorable view of the police, versus 33% who express an unfavorable view.

Higher educated Georgia voters also express more positive views of the police, with 72% of college graduates versus 60% of non-graduates stating they hold a favorable view of the police.

These findings have substantial implications for both Senate races. David Perdue won 17% of the Black male vote in November, and 8% of the Black female vote. Perdue also performed better with Latinos than President Trump, winning 43% of the Latino vote to Trump’s 37%. Among Latino men, Perdue won 45% of the vote, and among Latino women, he won 42%.