The substantial shift of minority and immigrant voters toward the GOP in the 2020 election is a topic of much speculation. Leftwing analysts and news outlets have until now largely attempted to minimize the shift, or covered it incredulously.

Market Research Foundation has dedicated substantial resources to unpacking the diverse views of minorities and immigrants for over four years now, and our research provides context for why immigrants may be leaving the Democrat Party.

First, a majority of immigrants do not align with either party, and instead identify as independents and vote based on issues that matter to them such as healthcare and economic issues. Forty-three percent of First Generation immigrants say they are Independents, and just 31% say they are Democrats and 18% say they are Republicans. 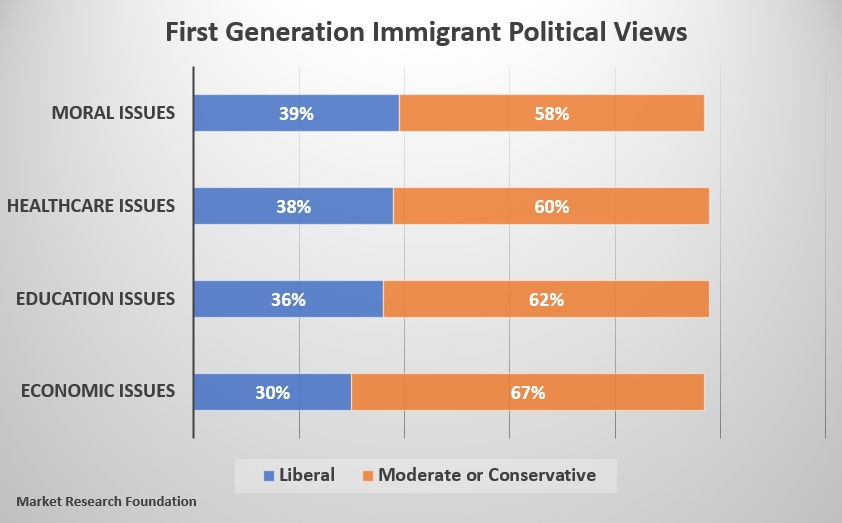 First Generation immigrants are highly economically motivated, moved to the United States for career and educational opportunities, view the United States favorably, and prioritize kitchen-table issues like healthcare and the economy, over social justice issues with little relevance to their lives.

This puts the views of a majority of immigrants at odds with a Democratic Party that has become increasingly disinterested in solving issues like crime, poverty, healthcare costs and lack of education, and instead focuses on identity politics, race-baiting, acquiescing to leftwing mobs, and disparaging the United States.

The New York Times recently conducted an analysis of 28,000 precincts in over 20 cities where immigrants shifted to the right, and noted that the November 3rd results, “have scrambled the conventional wisdom of American politics and could presage a new electoral calculus for the parties.”

The NYT notes that in Cook County, Illinois where Chicago is located, areas where over 30% of residents are First Generation saw both an increase in voter turnout, and a shift toward Trump. The shift was even more marked in areas where Latinos make up over 50% of the population. Almost all of the precincts with a majority Latino population saw an uptick in support for Trump.

One of the largest shifts the NYT documents occurred in Orange County, California, where Vietnamese residents “basically switched sides” going from the Democrat Party to the Republican Party. Trump also made substantial gains in heavily-immigrant precincts in New York, Philadelphia, San Antonio and other regions.

The NYT article concludes with a quote from Ruy Teixeira, a senior fellow at the left-leaning Center for American Progress, essentially conceding that Democrats’ obsessive focus on race and social justice instead of economic issues could have driven immigrants away. “In general, [the shift towards Trump| suggests that Democrats’ theory …that their electoral problems were all about race rather than class, was incorrect,” Teixeira concluded.

Market Research Foundation analyzed last week how California saw a marked shift toward the GOP among immigrants. Four of the 13 U.S. House seats the GOP flipped on November 3rd are in California, and all four seats were won by minority Republicans.  Two South Korean Republican women ousted Democrats, as did two second generation men with parents from Mexico and Portugal. All four districts are extremely diverse.

The First Generation shift toward the GOP is not the only area of concern for Democrats. Trump also made substantial gains with Black and Hispanic Americans (some of whom of course are immigrants and some of whom are American-born).

Nationwide Trump earned 32% of the Hispanic vote, up from 28% in 2016. Trump also won 12% of Black Americans nationwide, up from 8% four years ago. His most substantial gain was among Black men, 18% of whom supported Trump up from 13% four years ago.

As Democrat-run regions decline in livability and the party focuses race-baiting at the expense of solving looming economic problems, many immigrants and minorities are exercising their independence and supporting conservatives who promise to reduce taxes, restore law and order, and rekindle the American Dream.