The establishment GOP hoped Trump populism would run out of steam, but recent polling shows Trump remains extremely popular, and a majority of Republican voters want their elected officials to be more like Trump, not less. 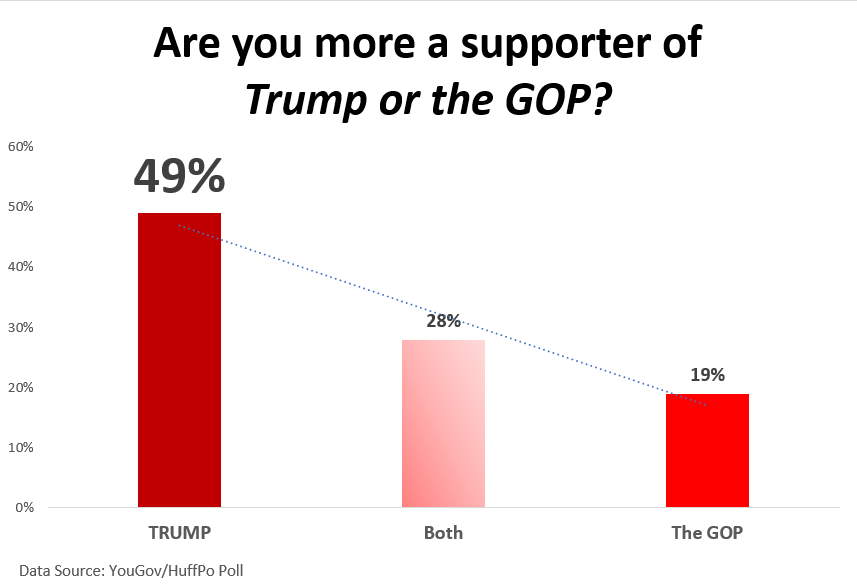 Support for the GOP over Trump is lowest among households who make less than 50K (19%) and higher among those making over 50K.

What’s more, a year-end roundup of polls from Newsweek shows Trump is already the frontrunner for 2024, despite not having officially announced yet. No candidate comes within striking distance of Trump, who is the number one choice for around 90% of Republicans.

What is abundantly clear is that Trumpism isn’t going anywhere, and for many Trump supporters, loyalty to the GOP is slim to none. As MRF noted last week:

“Loyalty to the GOP of old is in the gutter as many Americans are recognizing just how self-serving politicians on both sides of the aisle are. The Republican Party is splintering apart, shedding the neoconservative, globalist policies of the early 2000’s and building an unapologetically populist coalition that demands leaders focus on the needs of Americans.”

As true as it is that anti-establishment Trump supporters are a defining force within the GOP, there is an ever-widening split on the right between Trumpers and those who support the old Mitch McConnell establishment GOP.

It’s no surprise that men favor Trump, but 2020 saw that tent expand to include significant portions of Black and Hispanic men. As Market Research Foundation noted in November, Trump ended up winning 18% of Black men this year, up from 13% in 2016, and 36% of Hispanic men, up from 32% in 2016. Exit polls show that Trump supporters, particularly men of color, chose Trump because of his strong leadership. Trump received 71% of the vote among voters who indicated in exit polls that they wanted a string leader.

Although women are more enthusiastic than men about a Biden administration (29% are enthusiastic), 24% are upset, and among women without a college degree that rises to 36%.

Gen Zers (age 18 to 24) and younger Millennials (25 to 30) are also low on enthusiasm, with just 24% saying they are excited about a Biden administration.

As Market Research Foundation noted in November, Trump earned 4 additional points with young Whites in 2020 than he did four years ago, going from 47% in 2016 to 51% in 2020. His numbers with young Hispanics rose 3 points, from 26% in 2016 to 29% this year, and he neither gained nor lost ground with young Blacks, 9% of whom voted for Trump both years. 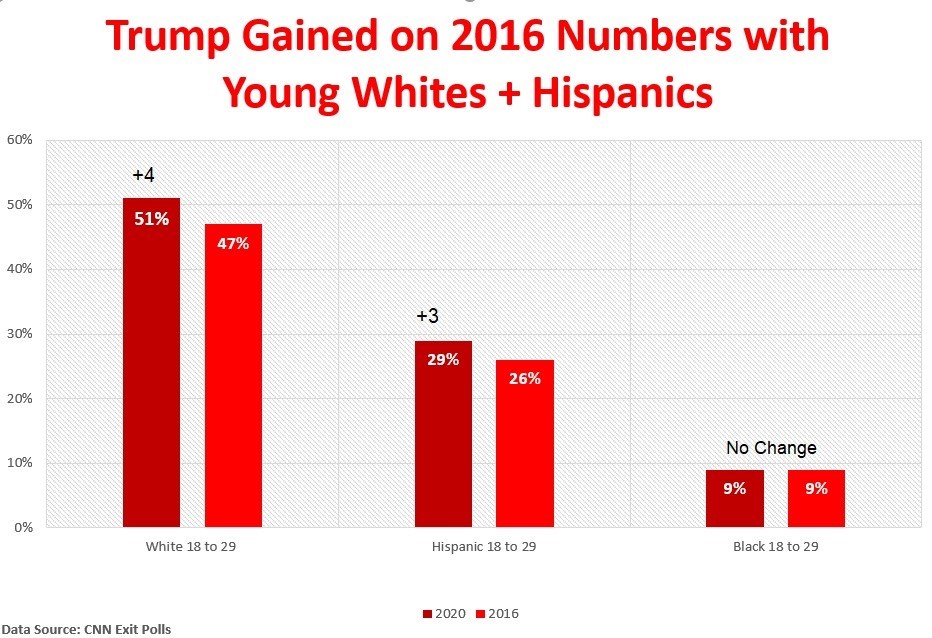 Trump’s unwavering popularity and ability to make inroads with new groups – like young Americans, Black and Hispanic voters, and first generation immigrants – poses a serious threat to the establishment GOP, as well as the left.

Washington elites spent the last four years in a state of disbelief that President Trump won the election, and no doubt assumed Trumpism would fizzle out after the 2020 election. However, all data points to an intensifying split on the right, as Trumpers remain steadfastly loyal to populism and the President, putting them at odds with status que Republicanism.