A series of recent polls show a crisis of confidence looms over the nation as an unwavering share of Trump loyalists defend his presidency against both Democrats and the establishment GOP.

Despite criticism from the establishment wing of the GOP, censorship from big tech, and four+ years of biased coverage from the mainstream media, over a third of Americans hold that Trump is the rightful winner of the 2020 election, and close to 75% of Republicans hold this view.

Around 40% of Americans say they have little to no trust in the integrity of the election process.

Over a third of Americans hold that Trump is the rightful winner of the 2020 election, and close to 75% of Republicans hold this view. Around 40% of Americans say they have little to no trust in the integrity of the election process.

An NBC News poll taken after the Capitol siege found Trump’s approval rating barely flinched. Trump sits at a 43% approval rating among voters nationwide, down just two points from before the November election and one point from 2017 just after he took office. Eighty-seven percent of Republicans approve of Trump, down just 2 points from before the November election.

The same poll found 35% of voters nationwide hold that Trump is the rightful winner of the election, including almost three-quarters of Republicans (74%) and almost a third of Independents (30%). Only 21% of Republicans nationwide agree that Biden won the presidency fairly.

In a similar vein, a recent CNN poll conducted after the events at the Capitol shows 40% of voters nationwide look back on Trump’s presidency as a success. This number is higher than that of the outgoing George W. Bush administration. The same poll found 53% of Americans approve of Trump’s handling of the economy, up from 48% last October.

As Market Research Foundation noted earlier this month, Trump’s most loyal support stems from men and white non-college Americans, and that continues to be the case. Still, relatively large shares of college-educated Americans, minorities, and women, approve of Trump as well.

Forty-two percent of men approve of Trump versus 26% of women in the CNN poll. What is more, 41% of whites, including 47% of non-college whites and 31% of college educated whites approve of Trump, as do 21% of people of color, and 32% of Independents.

What is more, 32% of voters nationwide say Biden did not win the election legitimately according to the CNN poll, a number slightly lower than that of the NBC poll. Among those who dispute Biden’s win, 73% say there is solid evidence to support this view.

The poll also found a full 40% of voters nationwide hold little confidence that elections are conducted fairly, and this view is especially common among men and non-college whites. 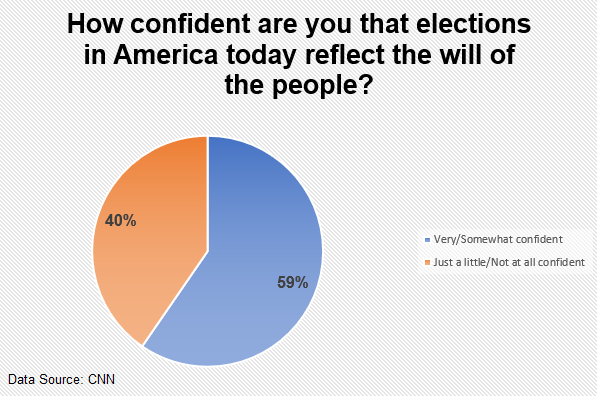 Almost half of men (47%) say they hold little or no confidence that U.S. elections are conducted fairly, and an equal number (47%) of white non-college Americans say the same thing.

When asked about their thoughts on the events in the U.S. Capitol during the vote certification, most Americans blame the rioters themselves for the events (88%), as opposed to blaming Trump or the GOP, according to the CNN poll. The NBC poll shows 52% of voters overall say Trump is mainly responsible for the events at the Capitol, but only 11% of Republicans agree. Almost half of Republicans (48%) say Antifa is to blame.

This polling round-up, conducted after the events at the Capitol, shows that most Trump supporters are undeterred by the actions of a small minority. What is more, Trump continues to hold close to 90% approval among Republicans, even as the establishment GOP’s approval craters. Over a third of voters nationwide contest Biden’s claim to the presidency, including around 75% of Republicans and 30% of Independents. The relentless de-platforming and censoring of independent voices is failing, and big tech and the political elites are learning erasing Trump will not be easy.

What all these numbers tell us is that despite the media hype and the vitriol on all sides, there is a fundamental problem that transcends Trump or Biden or any individual. That problem the growing sense that the system does not produce legitimate results. The crisis of confidence and legitimacy is worse from election to election and must be resolved.