Market Research Foundation was one of the first research organizations to recognize the potential for white non-college voters to increase Republican margins before former President Trump ended up doing so in the 2016 election. Our team has dedicated years of research to better understanding the white non college voter and we have allotted significant time to testing the most efficient path to voter registration and participation.

The 2020 general election marked the highest turnout rate for white non college voters in over 20 years and contributed to an overall rise in the white vote from 65% four years ago to 71% in 2020. Nationwide, the white non-college turnout rate increased 6 points, rising from 58% in 2016 to 64% in 2020 according to new analysis from Brookings.

Non college whites continue to vote overwhelmingly Republican according to Democratic research firm Catalist, with Trump amassing 63% of their vote to Biden’s 27%. In fact, when breaking down Trump’s coalition of voters, almost 60% of Trump voters in 2020 were white non-college Americans.

The white non-college vote increased significantly in the pivotal states of Arizona, Wisconsin, and Michigan, and played a crucial role in several other tight races.

Analyzing the above chart there is still significant room for the white non college vote to grow as a share of the electorate. Nationwide, 36% of white non college Americans chose not to vote, even in the record-high election of 2020. What is more, states like Michigan, Texas, and Pennsylvania continue to represent significant potential for Republicans to pick up votes in 2022.

Market Research Foundation in collaboration with Norman Analytics and Research constructed a pivotal case study in 2015 in Pennsylvania with the goal of finding a 2016 path to victory.

We conducted two polls in the state, one among non-registered voters and one among lapsed voters. Our analysis revealed existing registered Republican voters underestimate the number of lapsed and nonvoters with conservative values. 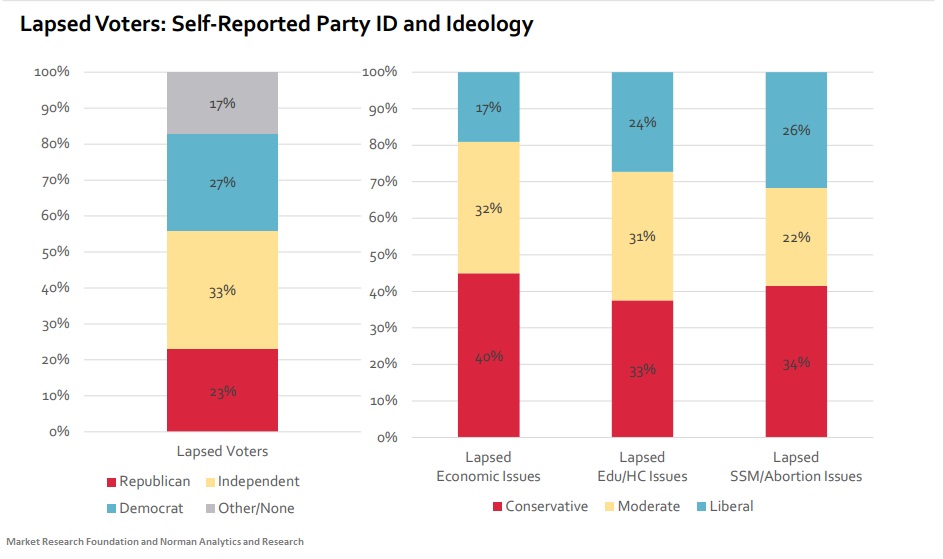 Our research shows nonvoters and lapsed voters tend to have different reasons for not voting, or for voting infrequently. Non-registered voters are more skeptical of candidates, while lapsed voters are more likely to think people should help themselves instead of relying on government.  Understanding the reasons behind voter hesitation and nonparticipation can help identify the best solutions for encouraging civic participation. The image below shows unregistered and lapsed voters’ agreement with various conservative statements. 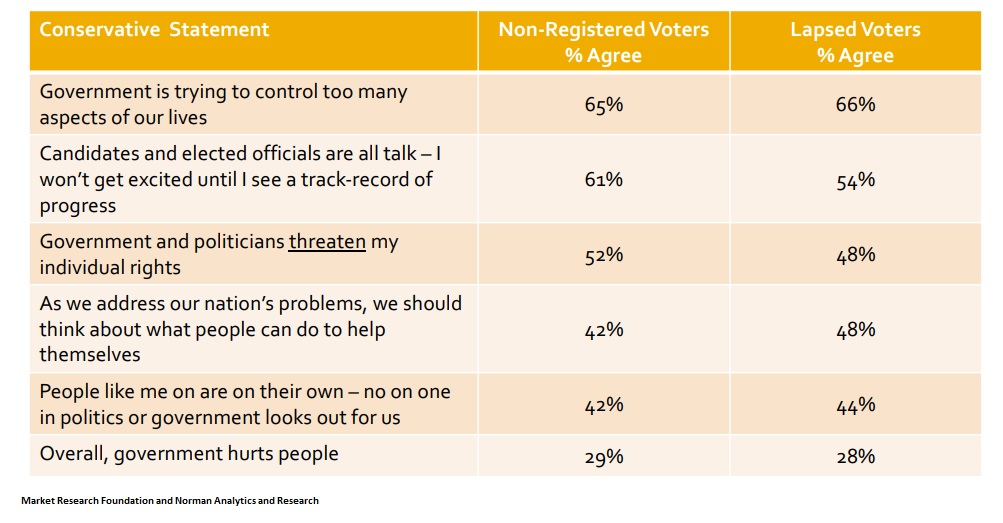 Market Research Foundation used a proprietary method of analysis to identify precincts in Pennsylvania with the highest likelihood of being home to non-registered/lapsed conservatives for the initial registration test pilot. We then employed a combination of traditional mail and other tactics to encourage voter registration and were able to achieve between 13.4% and 18.7% registration rates in our target areas.

Non-college white voters played a crucial role in limiting Democratic gains in battleground states, and continue to represent one of the largest voting blocs in the country at 44% of all U.S. voters. What is more, millions of white non-college Americans represent potential new voters in battleground states as demonstrated by Market Research Foundation’s 2015 Pennsylvania pilot study.

For two presidential election cycles now, the white working class has played a critical role in Republican victories, contributing to former President Trump’s historic 2016 win, and weakening President Biden’s margins in 2020. However, their votes are not guaranteed. White non-college turnout rates have historically lagged behind those of college educated whites. What is more, Trump is hardly a typical GOP candidate, and a preponderance of data suggests that working class Americans were inspired to action specifically because of Trump’s solutions. If working-class whites are to continue participating in elections, their priorities will need to be understood and addressed in future campaigns.

Beyond addressing the needs of new white non college voters, it is crucial to continue building out this voting bloc. Market Research Foundation has demonstrated the efficiency of traditional and creative contact methods and shown low propensity voters can be activated in a cost-effective manner. The white non college vote is on the rise, but campaigns must understand the most effective methods for keeping these voters engaged in the future.

February 24, 2022
A majority of Republicans and Trump voters remain significantly less supportive of foreign intervention indicating the neoconservative wing of the GOP is substantially less powerful than it once was. Early Thursday, Russia attacked Ukraine in a culmination of months of military build-up to keep the neighboring country from joining NATO....

Young Voters and Minorities Most Concerned about SpyGate and Biden Connection

February 21, 2022
These allegations come at a time when President Biden’s approval rating has fallen substantially with groups Democrats rely on, namely young people and minorities. A bombshell of a new poll on "spygate" shows a majority of voters are taking allegations that Hillary Clinton’s 2016 presidential campaign spied on Trump Tower...

February 16, 2022
The latest parental backlash resulted in three San Francisco School Board members being ousted Tuesday due to a long list of grievances including failure to reopen schools for months last year. Schools nationwide have faced increasing backlash from parents since the start of the pandemic over a multitude of issues,...