Democrats have long held that young voters are the future of the progressive movement and will cut sharply into Republican victories as they enter the voter pool, but there is growing evidence that the increasingly radical nature of the modern Democratic Party is pushing young people away. This is especially true in New England.

Young Republicans are twice as likely as young Democrats to say they are more excited about voting this year.

Interestingly, it is New Hampshire’s youngest voters in the eighteen to twenty-four age bracket who drag down the Democratic Senators’ favorability ratings.

It is New Hampshire’s youngest voters in the eighteen to twenty-four age bracket who drag down the Democratic Senators’ favorability ratings.

According to Data for progress, GOP Governor Sununu has a +22 point margin of support from New Hampshire’s youngest voters, while Sens. Hassan and Shaheen earn -14 and -13 points net favorability, respectively.

According to CNN’s New Hampshire exit poll, Trump won 48% of New Hampshire’s eighteen to twenty-four-year-old voting bloc, compared to just 35% of voters twenty-five to twenty-nine, and 42% of voters thirty to thirty-nine. In other words, voters under twenty-five supported Trump at substantially higher rates than all other age groups under 40.

These findings are in line with research conducted by Market Research Foundation (MRF), showing young Americans in their teens and early twenties may hold more conservative views than Millennials, the oldest of whom are now 40 years old.

According to MRF, 48% percent of Gen Z believe people should strive to solve their own problems, compared to 39% who think government should solve them.

Gen Zers from New England show the highest support for the idea that people should strive to solve their own problems, instead of looking toward the government to do so.  Fifty-seven percent of young New Englanders say people should think about what they can do to help themselves, rather than looking toward government, the highest share by region to express this preference as shown below. 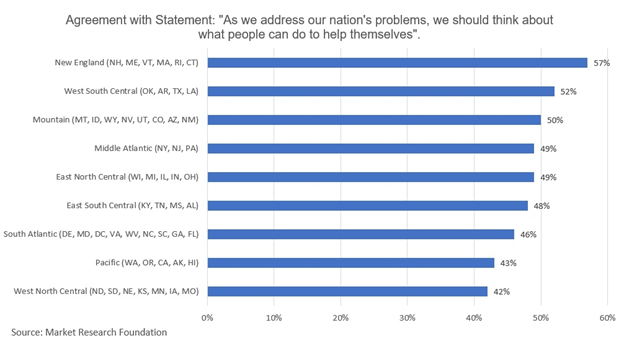 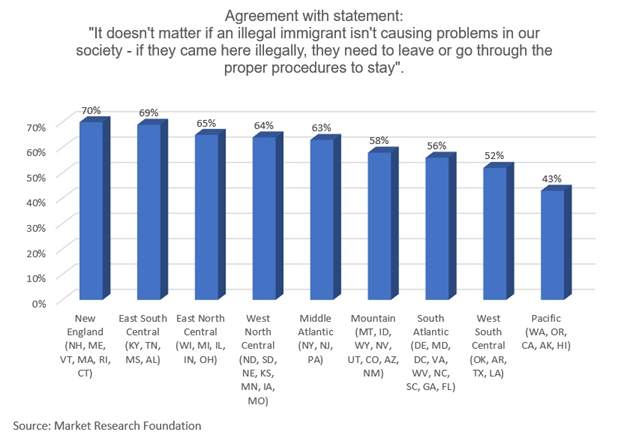 MRF’s research also shows young New Englanders staunchly defend American independence and reject the idea that the United States is obligated to take care of the rest of the world financially or militarily. Over three-quarters of young New Englanders say they agree with the fundamental principle of the America First movement, that the primary goal of any law or policy must be to focus on the needs of Americans.

Over three-quarters of young New Englanders say they agree with the fundamental principle of the America First movement.

Eight in ten young New Englanders say if the United States government spent as much time dealing with economic problems at home as it does on the problems of foreign nations, our economy would be much better off. Seventy-three percent of Young New Englanders say they don’t like seeing U.S. taxpayer dollars that could be used domestically given to other countries.

New Englanders hold some of the most anti-neoconservative foreign policy positions among Gen Z, with 78% saying the United States should stay out of foreign conflicts and only become involved if we are forced to. Even when the question of American foreign intervention is framed as helping other countries fight injustice, young New Englanders firmly hold to their non-intervention preference. Market Research Foundation asked if the U.S. has an obligation to become involved if there are injustices happening in other countries, and young New Englanders said no by a margin of 56% to 44%. Young New Englanders were the only regional group to take this firm stance against neoconservative foreign policy.

As of early February, President Biden’s favorability rating with young people nationwide is in serious jeopardy, having fallen 25 percentage points since he entered office. Biden took office with a lukewarm 56% approval rating among young voters but that number has fallen to just 31%. In addition, favorability of the Democratic Party has fallen 13 points since last year.

It is easy to assume young people are a lost cause for conservatives when the mainstream media highlights the woke-est amongst them, but that conclusion is premature. President Biden did end up winning the youth vote by 25 percentage points in 2020, but Biden’s margin with young whites was just 6 percentage points, and Trump won young White men by six percentage points. Gen Z’s views are a lot more nuanced than the mainstream media would have us believe, and many are open to conservative policies, especially in culturally distinct New England.