Democrats’ mishandling of the economy and the situation in Ukraine is likely to continue pushing Hispanics toward the right, and this opens an opportunity for working class limited government conservatives this fall.

A new Axios poll shows Florida Governor Ron DeSantis’ approval rating among Hispanics rose by seven percentage points between December 2021 and March 2022, as concerns about inflation have replaced concerns about covid-19. The poll found 46% of Latinos have a favorable opinion of DeSantis today, up from 39% in December.

As the Washington Examiner reported, Hispanics and Whites share nearly identical views of disapproval of Biden’s performance on the economy: Whites disapprove by a 31-point margin (32%-63%) and Hispanics by a 27-point margin (29%-56%). Whites also say Biden is not a strong leader on Ukraine by 20 points, and Hispanics say so by eight points.

The Axios poll found a lower share of Hispanics say the Democratic party represents people like them than in December (32% vs. 38%), and Republicans are seen as handling the economy better than Democrats (24% vs. 19%).

Concern about foreign conflict has risen 18 points since December among Hispanics.

In December 2021, the largest concern among Latinos was covid-19 at 37%, but over the past three months that concern has dropped to just 21%. During the same period, which has seen record high inflation and a tumultuous situation in Eastern Europe, Latino concern with inflation has risen from 22% to 34%, and concern with foreign conflict has skyrocketed from 5% to 23%.

Below are the top concerns of Latino Americans from the poll. 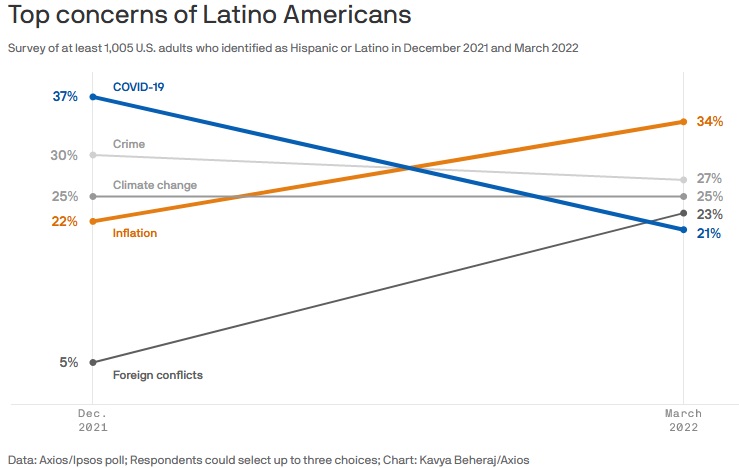 These findings are in-line with recent YouGov data finding inflation and the threat of foreign conflict are increasingly important to Hispanics. Hispanics say 45% to 9% that inflation is a bigger concern than unemployment, and full 47% of Hispanics are “very concerned” about the Russian invasion of Ukraine.

In March, the same survey showed only one-third of Hispanics (33%) said they were confident about Biden’s handling of an international crisis, compared to 38% who said they felt uneasy about it and 30% who weren’t sure.

Only one-third of Hispanics (33%) say they are confident about Biden’s handling of an international crisis.

On top of that, just 28% of Hispanics said they thought Biden had a clear plan for U.S. strategy with Ukraine, compared to 44% who said they didn’t think Biden had a plan and 29% who weren’t sure.

Democrats’ mishandling of the economy and the situation in Ukraine is likely to continue pushing Hispanics toward the right, and this opens an opportunity for working class limited government conservatives this fall.

No One Cares about Covid, Abortion or Ukraine – Midterms Will be About the Economy

July 12, 2022
Close to two-thirds of voters say their number one issue is something directly related to the rising cost of living. The political ruling class have rolled out one crisis after another to divide Americans – covid vaccine mandates, the Russia-Ukraine crisis, the Roe vs. Wade drama – but step outside...