Low propensity, rural voters are more difficult and expensive to reach, but they are vital for conservatives to continue winning races.

Election day “issues” including ballots being denied by machines in Maricopa County may have contributed to Kari Lake’s loss in Arizona, but new analysis shows it was a lack of support in rural Trump-friendly counties that sealed her defeat.

In metropolitan Maricopa County, Lake and Hobbs received nearly identical shares of the vote that their 2020 party nominees did. Lake walked away with 75.6% of the vote Trump got, while Hobbs secured 75.9% of the vote Biden got. Neither Lake nor Hobbs were significantly less appealing in Maricopa than their party’s 2020 nominees.

In Pima county, Hobbs did slightly better than Biden did, but it was only a 4% differential. Where the election was lost for Lake was in Arizona’s rural counties, where she failed to secure the same share of the Trump vote as Hobbs did with the Biden vote.

The only rural county Lake did significantly better than Hobbs in turning out the votes for the respective party 2020 nominees was in Yuma. In a majority of rural counties, Lake came up short compared to Hobbs in her share of the 2020 vote.

A good example is Gila, a small, rural, and rightwing county that Hobbs should have lost by a significant margin. Lake was only able to pull 80% of the 2020 Trump vote while Hobbs pulled almost 86% of the Biden vote. Hobbs still lost the county, but not by as much as she should have if Trump-friendly rural voters had been activated.

In Graham, another small rural county that should have been a strong win for Lake, she pulled just 72% of the Trump vote, while Hobbs won almost 77% of the Biden vote.

One of Lake’s largest losses compared to Trump was Greenlee, a county she ended up winning against Hobbs but with just 63% of the votes Trump got in 2020. Hobbs won a full 78% of the Biden vote in Greenlee.

Below are key rural counties where Lake fell short compared to Hobbs in securing the 2020 vote. 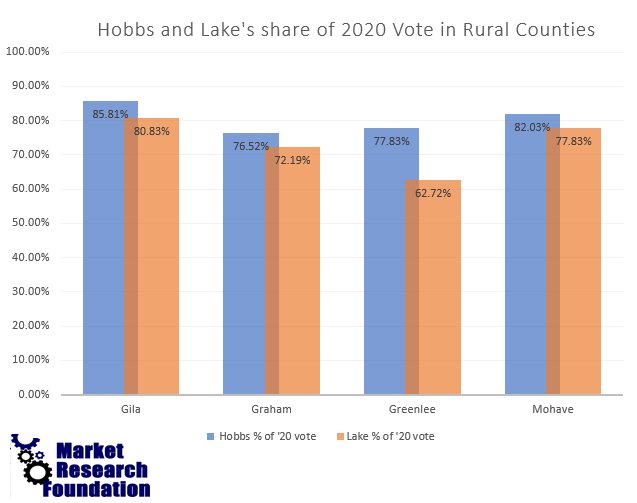 Market Research Foundation Chairman Bill Wilson summarized Lake’s loss, stating, “Kari Lake lost this election because she did not turn out conservative vote in the rural counties.  It is that simple.” Bill continued, “Republicans seem to have an aversion to their base vote.  It was rural voters in the 5th, 6th and 9th Congressional Districts in Virginia that so outvoted the rest of the state that Glenn Youngkin won. Why do they leave so many rural and exburb votes on the table?”

Lake did not fail to turn out suburban voters in Maricopa and Pima, but she did neglect to turn out rural voters, a mistake the GOP must come to terms with for future races. Low propensity, rural voters are more difficult and expensive to reach, but they are vital for conservatives to continue winning races.

A good friend of Market Research Foundation, Jim Crumley, developed the concept of this analysis and helped assemble the specific data.  Thanks Jim!