Thank you to Jim Crumley, a good friend of MRF who contributed to this analysis.

Anemic GOP turnout was once again the defining factor of another GOP loss with Herschel Walker coming up over 90,000 votes short against Raphael Warnock in the Georgia senate runoff.

Much like Kari Lake’s unnecessary loss in the Arizona gubernatorial race in November, the GOP failed to secure a substantial share of their own voters.

Democrats didn’t even improve on their votes in order to win in Georgia, as Warnock earned 131,276 less votes this time than he did in November. Democrat’s turnout game was down compared to 2021 as well.  Warnock won 1.8 million votes and Walker got 1.7 million last night compared to 2021 when Warnock got 2.3 million and Loeffler got 2.2 million.  This was a race that did not need to be a decisive Democrat victory but because of weak GOP turnout, it became one.

Jim Crumley, a friend of Market Research Foundation who follows the Republican Party’s efforts – or lack thereof – put it like this:

“The real story is the Dems had to spend $300 million to save an incumbent senator who not only was forced into a runoff but got fewer votes that he did when he first ran.  Had the Republicans simply turned out the people who voted for Loeffler in her runoff against Warnock, Walker would have won. They seemed to have really fallen flat in the types of exurban areas Youngkin did so well in.”

Another region Walker failed in was Gwinnett, where he achieved just 87% of his November vote to Warnock’s 94%.

Walker also failed to achieve the same levels of turnout in mid-sized Muscogee where he achieved just 90% of his November vote compared to Warnock’s 96%.

Below are the top regions where Walker suffered the largest drop-offs in support from November. As is evident, Warnock was able to retain substantially more of his votes. 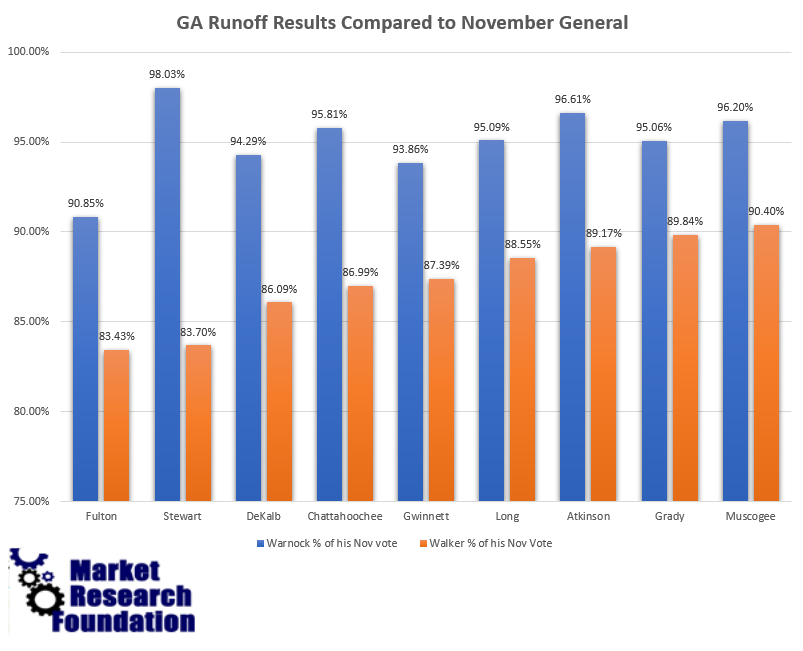 What is clear is the GOP continues to expel as little effort as possible in maintaining their voter base, let alone adding new voters, and if they continue this playbook they will lose perpetually.

Youngkin in Virginia used an entirely different playbook, and managed to not only turn out a significant amount of rural Trump supporters, but build inroads with suburbanites, lower income voters, and minorities.

As Market Research Foundation demonstrated after Youngkin’s victory in 2021, Fairfax county urban tracts that shifted the most toward Youngkin were overrepresented with Asian and Hispanic voters and significantly lower-income compared to tracts that shifted toward Democrats.

If the GOP does not add new voters and cannot maintain its vote base, they will continue to lose as they did last night, and as they did a month ago.